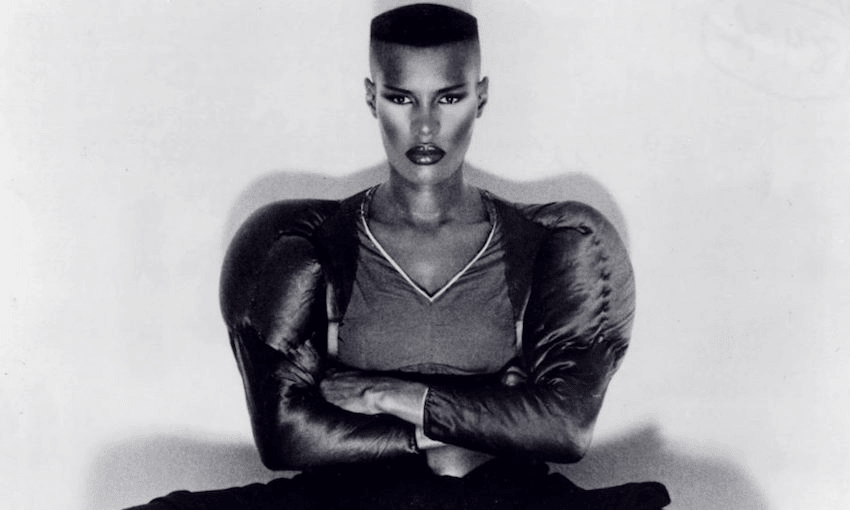 Art-pop innovator Grace Jones is playing Auckland City Limits this weekend. To help prepare you, The Spinoff retraces her career in 120 seconds.

‘Slave to the Rhythm’. ‘Pull Up To The Bumper’. A demented version of Sondheim’s ‘Send in the Clowns’. All of your pop faves owe what they do now to Grace Jones – new wave icon, one-time Bond Girl, and one of the first mainstream pop singers to marry the artistic potential of both visuals and sounds. Your faves love Grace Jones, and so do you.

The Jamaican-born preacher’s daughter was a polarizing artist from day one. Jones emerged as a disco singer and over ten albums moved seamlessly from genre to genre thanks to a love of innovation, influencing the very shape of modern dance music as she went.

Although she’s only released one album in the past three decades (2008’s Hurricane, an absolute corker of an electronic house album), Jones’ footprint on modern pop music is huge. Part of it is the visuals: the androgynous, unashamedly avant-garde look that set her apart. Part of it is the performance, from those wild early shows at New York’s Studio 54 and The Mudd Club, to hula-hooping during ‘Slave to the Rhythm’ at the Queen’s Jubilee a few years back. And part of it is the music. Today she is the defining sound of the 80s but reaches comfortably back into 70s disco, forward into ’90s house, and even further forward into what the future will bring.

Whatever style and innovation you can think of in contemporary pop, Grace Jones did it more, did it better, and did it first.

Thundercat plays at 3:45 pm on the Tamaki stage at Auckland City Limits, sponsored by Spark, at Western Springs Stadium and Park on 3 March 2018. Tickets are available here.