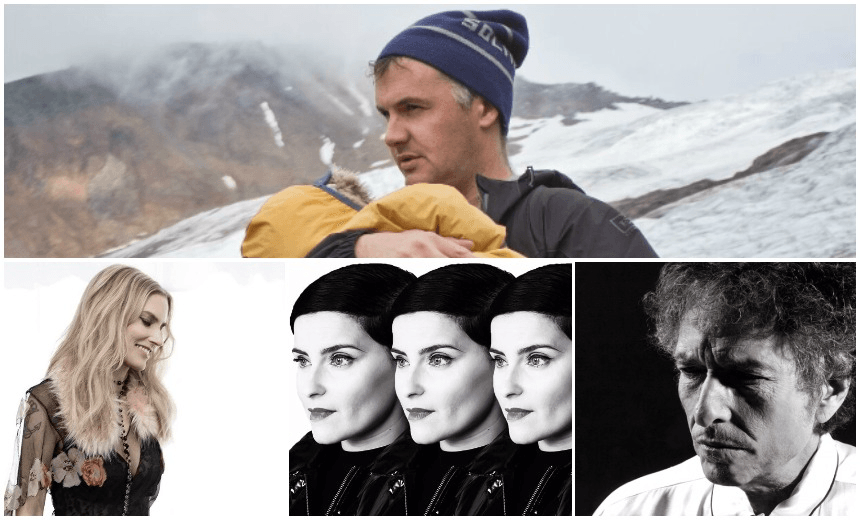 Mount Eerie – A Crow Looked at Me

One of the saddest albums ever

Phil Elverum’s wife died last year. They had a one-year-old daughter. He made a tender and painful record about his life after hers was over. It’s filled with stark reflections, conversations with his daughter and anecdotes about the real life of living without someone.

Crusted with tears, catatonic and raw
I go downstairs and outside and you still get mail
A week after you died a package with your name on it came
And inside was a gift for our daughter you had ordered in secret
And collapsed there on the front steps I wailed
A backpack for when she goes to school a couple years from now
You were thinking ahead to a future you must have known deep down would not include you

A Crow Looked at Me is barely music, barely poetry, barely art. It’s the sound of a man, almost certainly by himself in a room, emptying his life into a mixing desk. It is almost unspeakably good but almost unbearably sad. – Henry Oliver

When you name an album Mental Illness, and use the primary interview prior to its release to state that you have taken the opportunity to try and write as many of the “saddest, slowest” songs you possibly could, then it’s a safe bet the record is not going to be a party. But Aimee Mann is gently skewering the perception of her work as much as anything with these moves. In the decade following her efforts on the soundtrack to Paul Thomas Anderson’s film Magnolia (and her own cousin record, Bachelor No. 2 or, the Last Remains of the Dodo) Mann charted familiar territory – creating solid records with the same Jon Brion-influenced, vaguely carnivalesque production. 2012’s Charmer broke that up by being a more straight up pop rock album, driven by electric guitars, and was Mann’s best album in some time.

Mental Illness continues that break away sonically but in an altogether different fashion. Mann uses hushed acoustics and harmonies as the backdrop for her songs here. The result is an intimate but not fragile album. Mann’s sketches of the solitude and darkness are never maudlin, as she sounds resolute throughout, and is armed with one of her best sets of songs, whether it’s the restrained beauty of ‘Goose Down Cone’ or the vocal hooks of the character sketch ‘Patient Zero’. The net sum is one of Mann’s loveliest albums and probably her best music since Bachelor No. 2. – Pete Douglas

On paper it’s the kind of pop music we should be sick of by now, only Vallis Alps have moved with the times and found a way to bring their previously very 2015 sound beyond a road block so many are still stuck at. The songs on Fable are atmospheric and expansive, while still playing host to strong beats that stop them from sounding like background music. The EP’s single ‘Fading’ is also rich with Chvrches-esque potential about it, should the duo ever ‘make it’ outside of Australia. It’s not the full-length album I thought they’d released when I dived in, but at just four tracks long the EP still does a damn good job of demonstrating their ability to move around and try new things within a sometimes limiting genre. – Kate Robertson

A teenage singer called Anna Makirere put out this album on cassette in the Cook Islands in 1981. It was rediscovered and digitally re-issued by an obscurist Portland label called Little Axe Records in January, and today a link to a blog post about it popped up on my Twitter timeline. Tiare Avatea is a lovely low-key record, full of gentle harmonies and bubbling, lightly psychedelic guitar playing – as much as I’d love to know how this cassette from the Cook Islands ended up in Portland or where Anna is now (does she know about this reissue?), I’m mainly just grateful to the strange powers of serendipity for sending it my way. – Calum Henderson

Over a decade on, it’s striking how little effort Nelly Furtado made to cash in on the massive success of her dance floor make over Loose. That Timbaland-helmed effort possessed a pair of near era-defining singles (‘Promiscuous’ and ‘Maneater’) which justifiably dominated the airwaves throughout 2006 and 2007. Loose was particularly noteworthy because it followed the failure of Furtado’s sophomore album Folklore – a somber affair that gained little traction – and returned her to centre stage as she had been during the run of her distinctive debut, Whoa Nelly! Furtado took six years to follow up Loose, via The Spirit Indestructible – a weird attempt to marry the solemnity of Folklore to the club sound she’d adopted under the guidance of Timbaland – and an abject failure commercially.

Arriving five years later, Furtado’s fifth English language full-length The Ride seemed to have a troubled genesis which eventually saw Furtado buying the record off her label Interscope and releasing it independently. Teaming up with producer and collaborator John Congleton (St. Vincent), Furtado moves into a mature alternative pop. Propulsive rhythms underpin nearly everything here, highlighted by opener ‘Cold Hard Truth’ and the nifty ‘Tap Dancing’, but this is no dance album, rather a record that filters Furtado’s knack for hooks through St. Vincent’s trippy aesthetic. The result is a pleasing comeback which lays the way forward for Nelly, who hopefully see can be a little more prolific now she is free of the constraints of the major label world. – PD

Ol’ Bobby D can really knock these things out. His Never Ending Tour is turning into a Never Ending Album of the Great American Songbook. Which is in no way a bad thing. These are, as the nomenclature suggests, great songs – capital-G Great – and Dylan is a great interpreter of them. His voice sounds as full and tuneful as it has in decades (which still isn’t particularly full or tuneful, let’s be honest), his band is always on point and, it turns out, he’s a skillful producer. Most people who will love this are probably already loving it. But, if you, dear reader, want something low-buzz melancholic, catchy as can be, with expensive, reverb-drenched guitars, warm plucked double bass, shuffling snare drums, and a ‘room sound’ many would dream of, this is for you. And, Dylan is Dylan. No-one’s halfway in with him. If you like him, you love him. And, as you may have guessed, I do. – HO