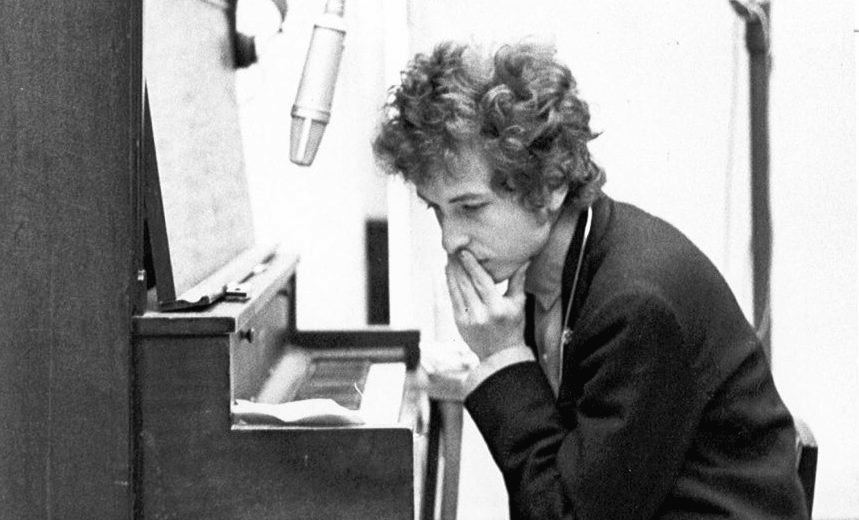 NEW YORK – 1965: Bob Dylan sits at the piano during the recording of the album ‘Highway 61 Revisited’ in Columbia’s Studio A in the summer of 1965 in New York City, New York. (Photo by Michael Ochs Archives/Getty Images)

NEW YORK – 1965: Bob Dylan sits at the piano during the recording of the album ‘Highway 61 Revisited’ in Columbia’s Studio A in the summer of 1965 in New York City, New York. (Photo by Michael Ochs Archives/Getty Images)

The Nobel Committee’s recognition of Bob Dylan shines a light on the transformative power of songwriting – a craft that very much belongs in New Zealand schools, writes Mike Chunn.

Listening to a song is like taking a journey. The mechanics of that trip depend on the song, in the main. That is, words and music. (Your psychological condition also plays a role, true.) You may only last a few steps. And then you stop and turn around. (That happened to me when I stumbled upon Bobby Goldsboro’s “Honey” one day at boarding school.) Others find you cruising along slowly till the song closes and you end the journey never hearing the song again. The simple fact of the matter is: you don’t want to hear it again.

And then there are those songs that instill a lifetime of momentum. The road becomes a yellow brick highway, a convoy of emotions that envelop and propel you and the satisfaction of the ride is so profound that you keep hitting the play button for that song for the rest of your life. For me, “Tangled Up In Blue” by His Royal Bobness is one of those.

I have read many positive responses to Dylan’s Nobel Prize for Literature and they line up a summary of fact. It’s all a beautiful collision: that Dylan’s mastery of story-telling, emotional resonance, evocative metaphor, cruel invective, social inquest, fumbling insecurity and all the other states that he musters, continue from each album he releases to the next. But it’s not stagnant. His songs evolve in parallel with the ages of man. His ageing. Our ageing. It is a truly riveting journey to be able to witness.

And there is a neat side effect to this Nobel tale. It is the spotlight being shone on song lyrics as a triumphant delivery mechanism for language – for understanding and realisation.

The Play It Strange Trust hosts songwriting competitions for NZ secondary school students. The music and the words are judged equally. For the 13 years that the premier competition, the Lion Foundation Songwriting Competition, has been run, more than 4,000 songs have been entered and more than 500 recorded professionally as prizes. A number of those finalist songwriters have walked out the school gates and established busy careers performing their own songs. They are our alumni.

Within this competition is the David Richwhite Lyric Award and each year we invite a wordsmith to pick a winning lyric. I asked Emily Perkins a few years ago. She agreed to be our judge straight away with: “A songwriter can often say more in three minutes than I can say in a novel.”

So where are “lyrics” today in terms of recognition within the NCEA curriculum? There has been talk for a while that they could be extracted from the student’s song and judged in the NCEA creative writing standards for English. But as many a noted songwriter will tell you, writing a lyric is not like writing poetry. And putting words to music is a very difficult thing to do well. The term here is prosody, the weaving of words and music in which rhythm, pauses, syllables, rhymes and structure all play concurrent crucial parts alongside the story being told, so that the listener finds an engaging pattern and an evocative understanding to what they are hearing.

People are starting to ask: why hasn’t songwriting been in the curriculum for decades, given that New Zealanders of all walks of life listen to recorded songs each and every day in the pattern of their own lives? They also travel to stadiums, halls and venues where they are played live. Songs are everywhere.

So let’s foster the craft of songwriting and stand up for its imaginative profitability in the creative lives of young New Zealanders. And the good news is this: it may be about to happen.

The Ministry of Education has a draft Achievement Standard for Songwriting in Level 3 written and currently being assessed by NZ music teachers. The feedback from that sector is very positive and its introduction in 2017 in NZ secondary schools looks likely. And that is just the start. For example, the University of Waikato is launching an Introduction to Songwriting paper in their 2017 summer programme.

One thing about all this is certain. Hundreds of young NZ secondary school students will dive in and take that subject knowing that their unique craft is finally deemed to be a positive and rewarding activity. And we will benefit in having a nation build up its repertoire of song such that those unique constructions – words and music – will entwine themselves into our emerging music tradition.

Let me finish by referring back to Dylan and the flow-on effect from his noble Nobel. Alex Ross in the New Yorker says: “The questions posed by this latest Dylan coronation go deeper than the winner-takes-all cultural economy of the early 21st century. We are confronted, once again, with the intricately tangled relationship between words and music. What happens when they merge? How does the language of one affect the language of the other? When a sung text takes hold of us, which is the more active force?”

These questions are about to permeate the intellectual and adventurous environment of our new, determined world of songwriting.