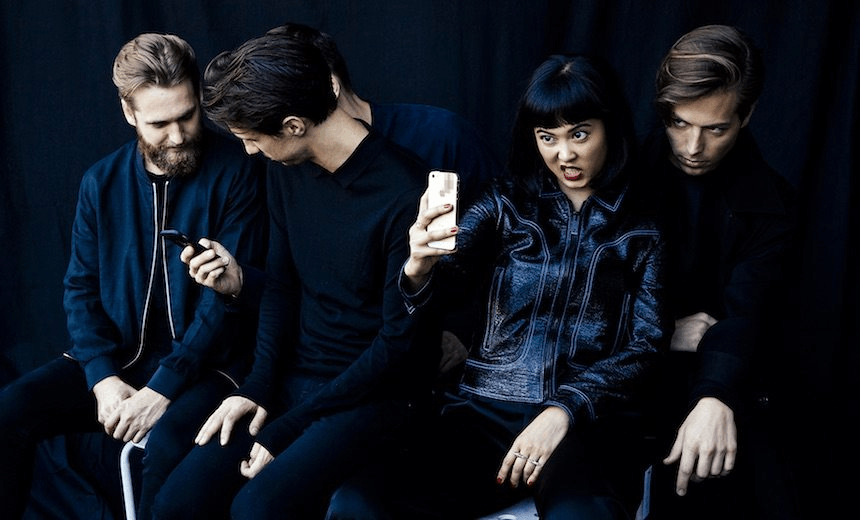 The Naked and Famous by Numbers

By Numbers is a new regular feature examining a musical artist and their work as a business through a series of numbers. First up: The Naked and Famous.

“We feel like an American band now,” says Thom Powers, the songwriter, guitarist and most reliably aggro interviewee in The Naked and Famous. They’re so American that they won’t be back in their native New Zealand to promote their just-released third album Simple Forms until next year, instead concentrating on a 32 date tour which has them in Salt Lake City tonight, the start of a brisk loop clockwise around the USA which closes in Sacramento in early December.

We haven’t entirely lost them – it’s just complicated is all. Over the course of a half hour he often expresses love for New Zealand, but more frequently an aggressive disdain to our often indier-than-thou attitude toward success. He has a lot of good adjectives ready for those who would critique his band’s commercial decisions: “unsustainable, childish and ignorant of the world”; “shocking, hilarious and comical”; “no intelligence”; “Absolute nonsense”; “thoughtless, baseless moral superiority”.

The most recent bout of TNAF-bashing came just last week, when a branch of New Zealand twitter discovered that the band were selling VIP tickets to their shows, allowing soundcheck access and a meet and greet with the band for US$95.

This kind of response has been with the band from the start. I recall their first alleged crime well. We all worked at Real Groovy at the time – I was editing Real Groove, Alisa and Thom worked downstairs in clothing and trades respectively. Their EP release show defied the strictly observed $10 convention by costing $20, earning wrath from what felt like every young musician in the city.

The relationship never really recovered, lurching from one little scandal to another: an unpleasant parting from Stinky Jim’s Round Trip Mars label, an apparent misquote in a BBC interview, leading to a 94 comment-long thread on the Corner. It just became toxic – Powers was too wounded and our musicians had too much fun playing troll. So it’s easy – though likely inaccurate – to view their relocation to LA as a kind of self-imposed exile from a New Zealand which never really embraced the Naked and Famous with the same enthusiasm it showed other bands, who wore their relative lack of reward and success like badges of honour.

I probably thought the ticket price was lame back then too, because it was easier than disagreeing with the mob. But we were mostly wrong in our judgements: the band weren’t forcing anyone to go to the show then and aren’t making anyone buy a meet and greet now. All TNAF were guilty of was asserting that their work had value, and that they had a right to be adequately compensated for their labour. Musicians rank above even journalists on lists of those most financially impacted by the internet, so it seems to me that anyone who can make a living as an artist is some kind of hero and should be acknowledged as such.

A couple of weeks back they released their new album Simple Forms, another engaging clutch of pulsing light industrial pop songs, and I wanted to know how they performed this incredible trick – a financially sustainable career in music – and so asked for a look inside the books of The Naked and Famous as a business. To this end I spoke with their manager, Paul McKessar, and Powers. This is what they told me…

The figures below are derived from those conversations, and should be trusted precisely so far as you trust their word.

This was the size of the crowd when the band debuted ‘Young Blood’ (then called ‘204’) in Hamilton in 2010, with F In Math in support. When the song was recorded and released, the crowds got somewhat bigger.

The day ‘Young Blood’ came out, McKessar was offered six figures if it could be synced (short for synchronized, meaning licensed to be played) in a cider commercial in Australia.

“The funniest one was this Trident commercial in Canada,” says McKessar of the many ‘Young Blood’ syncs. “It then rolled out into the US a little bit, but mainly off into Eastern Europe and Russia. This went on for 18 months or two years.”

“They kept adding places,” says McKessar. “All those Borat countries. They’d go ‘we want to add Kazakhstan – it’s not worth heaps…” The commercial finally tapped out at a cool quarter million.

As befits a post-Napster music success story, record sales never were a huge part of their income. But digital sales were the biggest part of record label income in 2014. Then Spotify happened.

‘Young Blood’ and ‘Punching in a Dream’ – brilliant pop singles both – combine for well over 100m Spotify streams, But given that J Cole banked less than a million dollars for over a billion streams in 2015, this isn’t a huge proportion of band revenues.

Syncs have generated 51% of publishing revenue

That’s a lot, especially given the sample size: ‘Young Blood’ alone has been synced around 50 times.

Young Blood > All their other songs combined

It’s the band’s big, shiny, perfect hit – their one song which has entered the modern canon, and is the source of 53% of their publishing revenues. “We have total reverence for [‘Young Blood’], we want to protect it,” says Powers. “But at the same time, I’m gonna be old one day – I want to retire, I want to have a house. I’m quite happy to exploit it any which way I can until its value is nothing. It might sound a little bit cynical – but I don’t think its cynical, I think it’s realistic.”

Which shows just how realistic it is. Despite ‘Higher’ currently being a top 50 Adult Alternative airplay hit, the chances of it breaking out and joining Green Day, Soundgarden, Radiohead and all the boy bands which play forever on alternative radio are incredibly slim.

After syncs and radio play, the pool of publishing revenue sources gets shallow pretty quick, ending in the bleak morgue of sheet music sales. “An argument for getting some of those guitar tab sites paying better royalties perhaps,” says McKessar, without much enthusiasm.

While publishing is the easiest money around, the band have become road warriors, playing consistently between 2011 and 2014.

Their current US tour, in support of Simple Forms is mostly in theatres of at least 1,000 capacity. Yet while the band works hard on its live show, it’s not Powers’ preferred mode of expression. “I love making recordings. That’s where my heart is as a musician. I’m not a musician so I can keep touring. I love making art, and touring isn’t making art, that’s putting on a party. Or showcasing. Or recreating. That’s not being a writer,” he says, “that’s doing a book tour.”

But it’s not cheap – there’s “over $100k in crew wages, over $100k in tour bus and hotel costs, plus another $100k in production expense,” says McKessar. It’s a critical album and tour for mid-career artists in an industry which feeds on the new. “You’re a little bit older and your roots are halfway down,” says McKessar. “Everyone’s got some money in the bank – but no one’s got enough money in the bank to stop. So I think it’s a really crucial time for them.”

Listen to Simple Forms along with all the music you love on Spotify Premium – free on all Spark’s Pay Monthly Mobile plans. Sign up and start listening today.