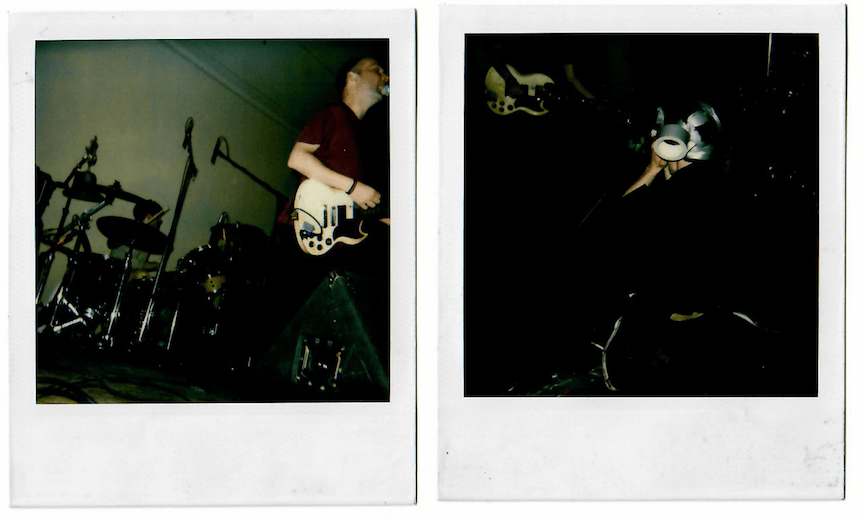 To commemorate 20 years since Fugazi’s tour of New Zealand, Henry Oliver presents an excerpt from his 1997 interview with Ian MacKaye and some never before seen photos of the tour by Amber Easby.

Twenty years ago today, Fugazi played the last show of what would be their final New Zealand tour at Caledonian Hall in Christchurch. Four days earlier, I, an enthusiastic 16 year old, interviewed Ian MacKaye before the band’s Wellington show at Victoria University. I had emailed the promoter (from my Hotmail account) asking for an interview and was told that Ian was always happy to just talk to whoever turned up after soundcheck.

I talked to Ian for about an hour and got two stories out of it: a (probably terrible) news write-up for the student section of the Dominion Post which is mercifully not available online and a way-too-long unedited Q&A (an edited excerpt of which is republished below) for the first issue of XjawaX the fanzine I was making with my cousin Nick (also not online but available at the National Library apparently).

Also at the show was Amber Easby, who, with a couple of her friends and a polaroid camera, went to every show on the tour. We publish a selection of those photos for the first time.

Henry Oliver, 16: What does being in Fugazi mean to you?

Ian MacKaye, 35: I don’t think in terms of that actually. I don’t really have any idea what it means to me. It’s just what I am, who I am, what I do. I don’t ever analyse my actions, I don’t ever try to put them into any kind of understandable psychology or anything. I just wake up in the morning and I do what I have to do for that day. That’s the way I’ve always been.

You don’t have any goals in music?

No. Not really. I never reckoned to be a musician, to be honest with you. I wanted to be in a band but I didn’t know if I wanted to be a musician. I played the piano when I was a kid. I like to create music or songs that mean something to people, that’s I think that I would like to do. I would like to be able to play music that would just blow people away, that to me is a goal. It’s not based on some sort of arrogance or some sort of issue of power to be impressive as much as just, I want to return the favour that I feel that I have received from having been so inspired, so blown away by so many other people I’ve seen play music. So I’m just trying to return this favour, because I think it’s an important one.

I think it’s the underground communities that exist across the world, the networks and the communities, they’re all around. They trade music as a currency, a currency people get to know each other and connect on. Those are really, really, really important places. I feel that in a lot of ways. I brought a context to my life, I really needed when I was 17 years old. I was not happy with the selections that had been offered up to that point., as far as life was concerned. Discovering this underground made me feel like, ‘Yes, this is what I want to be,’ because it challenges all conventions at every level. Everything is not all good. It just didn’t accept the status-quo and I thought, ‘This is the right place for me’.

Does having to tell people to please not jump on each others’ heads affect your enjoyment of shows or tours?

I remember at one stage we did this gig in like ’89 or something. And the time in the States there were skinhead kids everywhere, so we fo to the show and there are these skinhead guys and they’re all running in circles and I said to ’em: ‘You know, you guys think you’re so badass. I would be way more blown away if you were all wearing big wooden clogs and shuffling around the room’. For me, that would be insane. That would be amazing to see.

Because American culture is imperialist culture, just going everywhere around the world. American culture is everywhere. So it’s discouraging for me to land in every country around the world and see people behave in a way which is really consistent with the way American culture has been represented to them. It’s sort of like pulling over when you’re driving on a highway and every fucking gas station there’s a McDonalds. What happened to originality? What happened to people reacting to music based on their cultures? I’d rather pull over and eat food that’s local, that springs from local concepts. To me, that is way more interesting. I’m in a predicament though, because I feel like I am an ambassador of my culture, from Washington DC. This is the music that we play. I see us like Latvian folk singers, cause this is our folk singing, but unfortunately it’s tied in with really horrible, horrible phenomena in this culture.

You might not know it, but tomorrow is the first day New Zealand will have MTV.

I’ve heard about it. It’s everywhere you go and it’s a disturbing thing. Where do the kids stand up and say ‘Fuck that’? When do they stand up? At what point?

That to me is when I play a show and I see like three kids or five kids or 20 kids who insist on launching themselves on top of the crowd, even during the slowest, quietest song. They are McDonald’s, that’s all I’m saying.

Recordings of every show of Fugazi’s 1997 tour of New Zealand are available for purchase here.