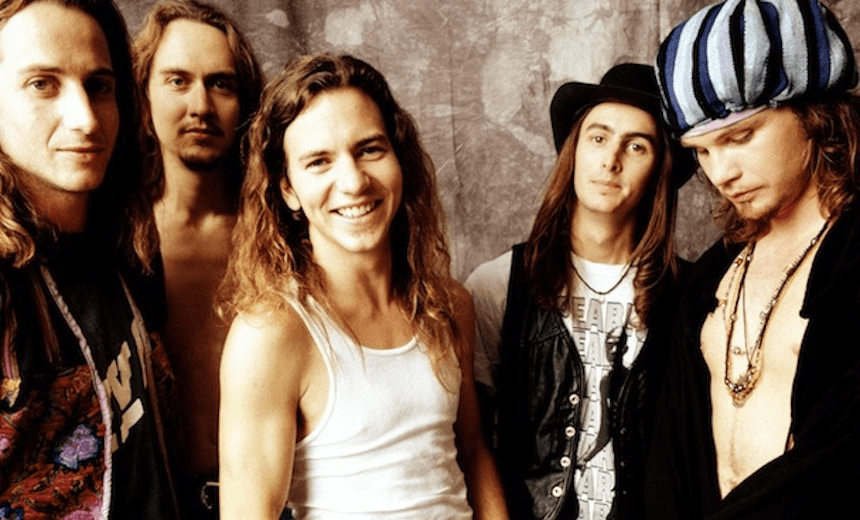 Pete Douglas looks at how a litany of amazingly bad fashion choices correlate with the band’s best music.

Nothing makes you feel quite as old as a band you’ve grown up with being inducted into the Rock n’ Roll Hall of Fame. This struck me hard a few years ago when I was faced with the sobering image of the perennially adolescent Green Day being inducted while wearing suits and bow ties. It was a shock that this group had somehow reached the point of eligibility: that their first album had been released 25 years prior.

When I was in high school, there was a group of fellow students who were referred to as the “Green Day kids”. It was a pejorative term and it wasn’t used just because they listened to Dookie all day. They tried to dress like their heroes too – there were Doc Martins, wallet chains, and some pretty appalling attempts to get the bed hair look of a young Billie Joe Armstrong. Think a low rent version of the ‘When I Come Around’ video, but with even more aimless wandering around.

Reflecting upon Green Day’s morphing appearance over the years, and how their last few albums just aren’t that good, I started to wonder: is it a coincidence that as they started dressing semi-respectably their music went into decline?

There seems no better way to test my theory than applying it to 2017’s inductees, Pearl Jam. Green Day and Pearl Jam were two of the most commercially successful American rock bands of the 1990s. There are literally dozens of terrible imitators that you trace back to both these groups. In Pearl Jam’s case their successors were almost unforgivable (Creed, Seven Mary Three, Candlebox to name but a few) but it is grossly unfair to reduce Pearl Jam to the bands which they influenced. They are a shining example of being a band on your own terms, but how has their fashion moved with their music? Was their music best when their clothes were the worst?

The Music: Ten always seems so great in memory, a fact no doubt helped by songs like ‘Alive’ and ‘Jeremy’ still being staples of album rock radio decades later. But the sound of the album sits somewhat at odds with its reputation. It’s trident, sheening, slightly ’80s sounding, though a Brendan O’Brien remix is superior to the slightly dated original. Perhaps the glossy production played some role in Kurt Cobain’s thinking when he accused Pearl Jam of “pioneering a corporate, alternative and cock-rock fusion”.

The Look: A little like the sound of the debut record, Pearl Jam’s look at this time is deeply indebted to the prior decade. My favourite aspect is Mike McCready and his slavish Stevie Ray Vaughan worship (those flowing shirts!), but bassist Jeff Ament and his ridiculous floppy hats are also a highlight.

Vs. and Vitalogy era

The Music: I like this era of the band the best. Sure there’s some weird filler on these records (‘Hey foxymophandlemama’ anyone?), and it’s tempting to dock Vitalogy more points simply for having one of the most annoying CD package in history (streaming purists may not quite appreciate the frustration of an odd-shaped case ruining the alphabetisation of the your collection), but this was the band’s peak in many ways. Here they hit a near-perfect compromise between classic rock, a punk(ish) ethos and the slightly meandering art rock they would take to heart in later years.

Fun fact: when Pearl Jam released all 72 concerts from their 2000 world tour, ‘Corduroy’ was the only song featured in every single show.

The Look: The band actually somehow look more ridiculous between 1993 and 1994 than earlier in the decade. Surprisingly, the most terrible things about the Ten era are enhanced (are Jeff Ament’s hats actually getting bigger?). Cargo shorts also feature very heavily in this phase of the band, as does that grunge staple flannel. A key contributor here, pushing things over the top, is drummer Dave Abbruzzese with his silky locks and a cringe-inducing soul patch.

No Code and Yield era

The Music: Hardcore Pearl Jam heads will tell you these albums are great and the world just wasn’t ready, but that’s not quite true. Neither is really bad – No Code takes the arty weirdness of Vitalogy to an extreme, and quite deliberately shies away from the anthemic, whereas Yield tries to re-orientate after the chilly reception that its esoteric predecessor received, but takes the streamlining a tad too far, and so drags a little by the end.

The Look:  Gone are the long locks which adorned the first half of the decade. Guitarist Stone Gossard starts dressing almost too respectfully, like a dad who works in IT, while Jeff Ament and Eddie all but give up the idea of wearing character hats. Most tellingly, the removal of Dave Abruzzese from behind the drums for the much less hirsute Jack Irons seals the straighter, simpler look.

The Music: You can’t just chuck five albums together for most bands, but with Pearl Jam you kind of can. From Binaural on, Pearl Jam become a cult band, churning out fine rock records in no way related to what is happening in modern music, or even whatever grunge was. The craft is often very good (Riot Act and Backspacer are particularly strong) even if the band has moved away from the spotlight where they once resided.

The Look: Another reason you can collapse the past 17 odd years together is the band’s look really hasn’t changed. Matt Cameron joined, which removes the odd drummer fashion sense from the equation, while the rest of the band tend to look pretty appropriate for aging rockers, skillfully avoiding any embarrassing Aerosmith-style attempts at eternal youth (though it would be remiss for me not to call out Eddie’s brief mohawk phase in 2002).

So, all in all, the theory stacks up pretty well, especially in the first half of the band’s career. Pearl Jam’s consistency in the new millennium (both musically and sartorially) even things out a bit. Here’s hoping for a cos-play recreation of the ‘Alive’ video (outfits and all) for their induction ceremony.