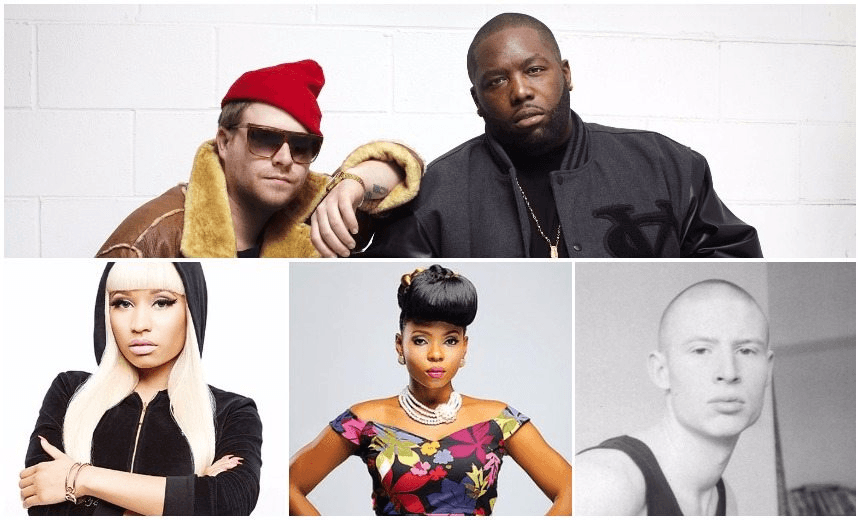 Run The Jewels – ‘Legend Has It’

Run the Jewels, the duo of Killer Mike and El-P, are tearing it up with renewed post-election anger ahead of their third album (which I assume will be called RTJ-3). On ‘Legend Has It’, the Jewels trade short, punching verses over a mid-paced, digitally-distorted beat of neck-hurting drums, fake-as-hell brass, bringing in cut-up video game sounds and blowing it out from time-to-time. It contains everything that they do best – political fury, pop culture one-liners and brag rhythms, bridging avant-hip-hop and slow-car party rap as only they do – Henry Oliver

Not one to rest on her laurels, just over half a year since Yemi Alade’s excellent album Mama Africa: The Diary of an African Woman she’s already on her third single from her as-yet-untitled next album. After the tropical house excursion of ‘Want You’, ‘Gucci Ferragamo’ shows she can still nail classic afrobeats with a sassy, waist-winding number that shows off her ability to effortlessly glide from anthemic choruses to tongue-twisting verses. – Stevie Kaye

Nicki Minaj rapping over the viral hit of the year (Rae Sremmurd’s ‘Black Beatles’, which as well as being a fucking jam, has become the official soundtrack to the Mannequin Challenge that has taken over the world) is a no brainer. While the usually prolific Nicki has been a little quiet recently, on ‘Black Barbie’, she reminds us that she’s still one of the sharpest rappers out. And combined with this unstoppable Mike Will Made It beat you can’t go wrong. If you’re getting sick of the original, put this on repeat. If you’re not (and you shouldn’t be), put em both on. There are so many good lines I’d love to quote here to wrap this up, but it’d make me blush too much to cut-and-paste some of this stuff in public, so I’ll just link to the lyrics here and you can sing along with your kids at home. – HO

Former New Gum Sarn singer/guitarist Oscar Dowling’s second single as a solo artist, ‘Ease My Passing’, is a grim indie number about our endless desire for technological efficiency, convenience and comfort. Dowling’s got a great sad-guy indie voice and writes catchy songs that are more melancholic than depressing, and ‘Ease My Passing’ shows a maturing of, rather than a radical departure from, the sounds he developed with his former band. – HO

The self-described gqom queen from Durban, Babes Wodumo extends her campaign on the African charts by enlisting Nigerian afrobeats star D’Banj (whose irresistable ‘Oliver Twist’ troubled the UK charts a few years back) on a remix of dancefloor banger ‘Wololo’. It’s a delirious fusion of the skeletal, slippery rhythms of South African house vibes and the swagger of poppier Nigerian dancehall/hip-hop-inflected party jams – the best of both worlds. – SK