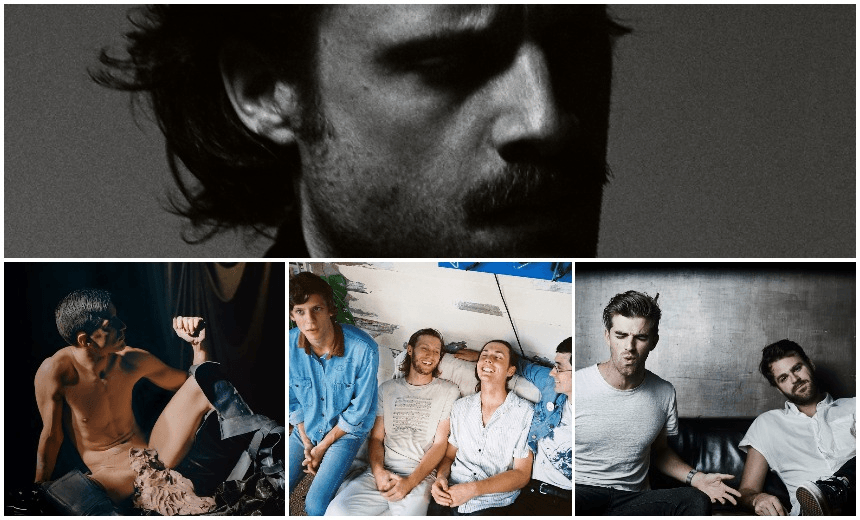 When ex-Fleet Foxes drummer Josh Tillman delivered his sweet sophomore album, I Love You, Honeybear, via his solo moniker Father John Misty, amongst the ecstatic praise was the odd comparison to the early work of Elton John. That cannot quite prepare the listener for the sonic surprise of the follow-up Pure Comedy, a full-blown tribute to early Elton, sitting somewhere between the singer-songwriter-isms of Honky Chateau and the conceptual narratives lying within The Tumbleweed Connection and Captain Fantastic and the Brown Dirt Cowboy, all tied together with a sprinkling of the pretentious prog rock of Goodbye Yellow Brick Road. Rather than hold him back, Tillman’s almost slavish imitation seems to set him free, delivering an album that sounds like the early-’70s, but which is thoroughly modern in its perspective and concerns.

Pure Comedy is a 74-minute misanthropic assault on modern life, in which Tillman variously refers to the human race circa 2017 as godless, overmedicated, barely-human, demented monkeys. Even at their darkest moments, Bernie Taupin and Elton were never as nihilistic as Tillman is here. But, as telegraphed in the almost absurd build up to the album release, Father John Misty thrives on sardonic humour, and jokes are deftly weaved through the fabric of the album, which, combined with the lightness of the music, serves to pull the listener in even as they are being indirectly insulted. It’s a remarkably ambitious, densely-sprawling record, that one can only stand back and admire, but your ability to fall totally in love with Pure Comedy may depend on where you stand on the creator himself and his various obsessions. – Pete Douglas

The Chainsmokers – Memories…Do Not Open

Memories…Do Not Open is an electronic pop album, stuck somewhere between Simple Plan-esque pop punk, that weird album Linkin Park released in 2012, and the Chainsmokers own pop-drop anthems that defined 2016. They’re mixing drinks in the way your parents warned you about and there’s no way it could ever end well.

I’m not really sure what I was expecting this album to be. I’d given The Chainsmokers the benefit of the doubt, but there’s a nonchalance about the whole album that’s hard to ignore. If you’re a brooding indie band from East London, nonchalance probably looks good on you, but a duo who are playing the biggest stages in the world, delivering this? It just doesn’t land. The absence of strong female vocalists and the reliance on the not-terrible-but-not-brilliant Drew Taggart only feeds into the overtly flat nature of the album.

The album isn’t entirely bad. ‘The One’, ‘Paris’, and ‘My Type’ offer glimmers of hope, but then there are songs like ‘Break Up Every Night’ that are so crass they may as well have been written by a 14-year-old-boy.

It’s also worth noting that the final track featuring Florida Georgia Line – one of the songs people were most excited and curious about – doesn’t even spotlight the wildly successful vocalists, instead masking their voices behind distortions and editing. Florida Georgia Line and Chris Martin have both been dragged down with this trainwreck of an album but remain the two collaborations giving it any kind of credibility.

Memories will play arenas, but it’s not going to blow up the massive outdoor stadiums they’ve spent all of 2016 playing. Loaded with high-risk songs, the Chainsmokers can be commended for trying something new with Memories, but they’re risks that aren’t going to pay dividends the same way their 2016 singles have. They’ve fallen victim to the sophomore album curse on their debut, and I can only hope they’ll find their way back as the year goes on. – Kate Robertson

When I sent the Bandcamp link for this record to my mate Ryan – the only person I know who likes this kind of bummed out indie guitar music as much as I do – he replied: “This is blissful. I want to be in a hammock?”

As a 10-words-or-less review, this pretty much nails it, but I wanted to add a couple more details. While it’s easy to see myself in a hammock listening to this album, it’s important to note that it’s certainly not summer, and may not even be sunny when I’m in the hammock. If anything it’s probably my birthday, which is in May; there’s a sad late-afternoon light and I’m (hopefully) drinking an indulgently fancy beer straight from the bottle or (preferably) can.

I wish I could claim the ‘birthday’ detail as my own, but I got it from the album’s lyrics. “Another year’s gone by / Hell, I’m still alive,” the singer deadpans on ‘I See You’, a ‘Range Life’-style country jangle which absolutely decimated me the first time I heard this bit: “I got a couple texts from my mom / One said ‘Happy birthday’ / And the other one was / A smiley face / A sideways heart / X O X O / We miss you won’t you come on home…”

Fuck. This was on about my 5th listen – it’s not immediately noticeable, but just about every song is full of this kind of quietly devastating songwriting. “I was staring at the setting sun / And I realised my time had run out / And I was relieved” he sings on the sweet sad opening track. A Pitchfork review accurately described the album’s vibe as “nonchalant despair.”

I sent the band an email earlier in the week saying how I liked the album and asking where they got the name ‘Bonny Doon’ from. It’s wild that an indie band from Detroit would name themselves after (a misspelling of) a tiny Australian town, made famous by a cult comedy movie that came out 20 years ago, right? They didn’t reply. – Calum Henderson

Inappropriate for most music listening contexts

This is music to listen to by yourself, loud enough to freak you out a little in the scary bits. It’s music to listen to like a movie – take 45 mins out of your life and give yourself to it. Give in to the gothic lullabies, the twisted electronics, the glitch opera, the hi-res, whiplash SFX. You might like it. Or even love it. – Henry Oliver