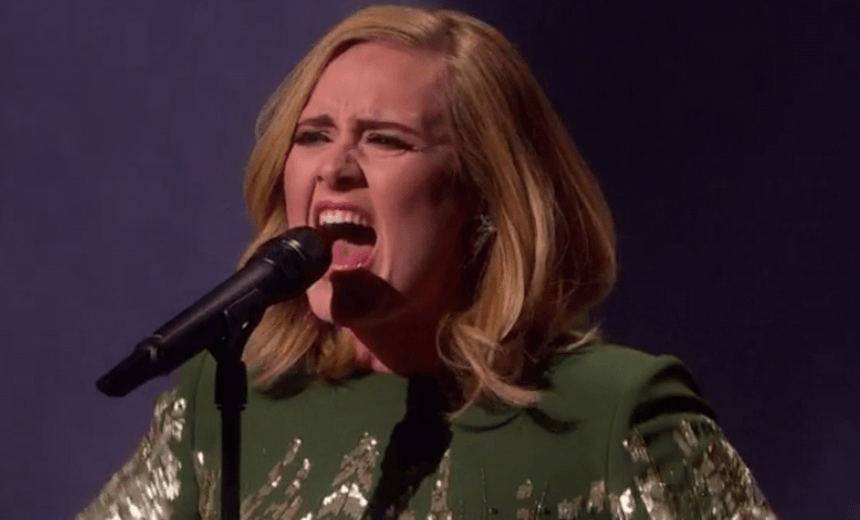 Review: Adele at the BBC – “I literally just burst into tears”

Calum Henderson watches Adele return to the stage, with help from Graham Norton, and gets a little misty.

The first time I heard ‘Hello’, the lead single from Adele’s third studio album 25, I was sitting in Hollywood Bakery on my lunch break eating a tandoori chicken wrap.

I knew straight away what song it was because the first word she sings is the title. “Hello?” She voices it like how you answer the phone – half question, half statement. It’s genius songwriting.

Before you know it she’s belting out the chorus: “Hello from the other siii-ide,” and you’re sitting there staring out the rain-streaked windows, past posters promoting a $9 pie, sandwich and Coke combo, and it suddenly feels like you’re in a very grim realist painting: Four Strangers Sitting in Hollywood Bakery Listening to Adele ‘Hello’ on a Rainy Day (Oil on canvas).

It’s the second song Adele performs on her TV special Adele: Live in London, an uneven mix of music, chat, and bits where the singer sneaks up on unsuspecting fans.

She stands in her now familiar pose at the microphone, dwarfed by a large screen showing artful black-and-white close-ups of her hands and blinking face. Live, her eyes remain fixed on the floor for the first few lines, not looking up until the part where she asks: “Can you hear me?”

She’s wearing a billiard table green dress with an intricate, contoured pattern of rose gold sequins which makes her look like a kind of Etsy superhero. And like a good superhero, tonight she has a sidekick.

“I’m not a very good presenter so I’ve got someone in to help me,” she tells the crowd by way of introducing Graham Norton. The talk show host seems to be channeling Oprah, asking mostly deep, searching questions as opposed to his usual mischief and innuendo.

He asks about her voice. In short, it went to the dogs. She stuffed her vocal cords and had to have an operation. “It was very clean,” she says about her post-op voice. “Like a brand new one.” Sounds like getting a new cricket bat. You have to knock it in with a mallet and rub linseed oil on it before you can use it in a game.

The voice appears to be back and as good as ever. No one can sing quite like Adele – a point demonstrated in a stunt where she gets a prosthetic nose and joins a group of Adele impersonators Graham Norton has tricked into thinking they’re auditioning for the gig of a lifetime.

As ‘Jenny’, Adele joins her unsuspecting impersonators backstage. “Can’t wait for the new album!” one of them chirps. Jenny rolls her eyes and mutters “she’s taking her time…” She feigns nerves. She looks like write-off. But no more than two lines into her rendition of ‘Make You Feel My Love,’ the other impersonators can already tell.

“It’s her,” one of them whispers. You see them hurtle through a whole range of emotions in a matter of seconds. The first one to notice starts doing this silent, gasping laugh, like a panicking cat. “As soon as she opened her mouth you could just…” she searches for words once she has had a chance to stabilise. “You can’t mimic that.”

At 27, Adele is young for a singer but old for a pop star. Her debut single ‘Hometown Glory’ was written 11 years ago. She performs it back-to-back with a song from her new album, ‘Million Years Ago’. The new song mines in the same deeply nostalgic vein as Dusty Springfield’s ‘Goin’ Back’; it’s the kind of song you can imagine being turned up too loud after a bottle of wine.

For all the fame and fortune that has come her way since she wrote her last album, Adele retains the essential ability to strike a common chord in her songwriting. “I drove by Brockwell Park, which is a park in South London where I spent a lot of my youth,” she explains to Norton of the song’s genesis. “And I literally just burst into tears.”

“I really missed it. It’s got nothing to do with me feeling like I can’t go and sit in there any more and drink a bottle of cider. It’s more that life happened, so now I’ve got no one to meet there. It’s just about that, about how I never realised that all this was going to happen.”