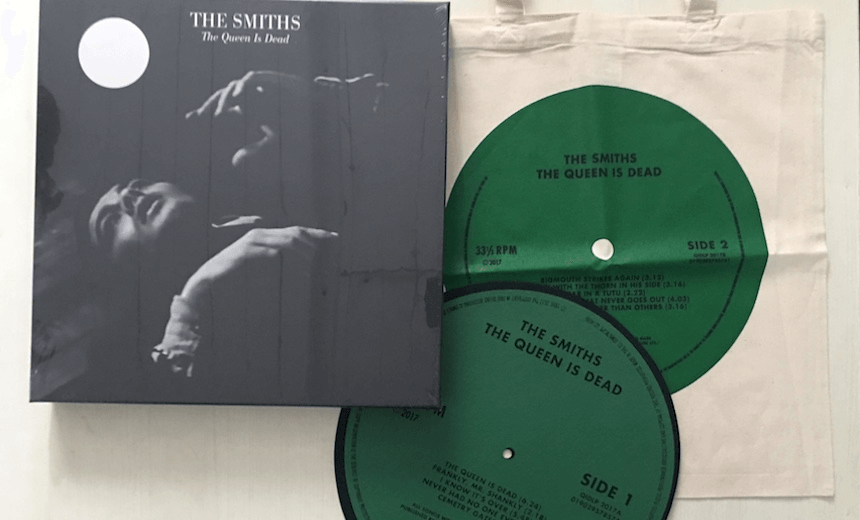 It’s 31 years since the release of The Queen is Dead, the Smiths’ third studio record and NME’s official Greatest Album of All Time. The album has just been reissued in a series of special edition packages and we’re giving away the most impressive of the lot, the 5-LP collector’s box set.

More Smiths on The Spinoff:

Crashing down on a crossbar: The New Zealand man who starred with Morrissey in a Smiths video

Meat is Murder might rock harder, The Smiths might be more gloriously gloomy, and Strangeways Here We Come might work more cohesively as an album. But The Queen is Dead is still regarded as the Smiths’ apex. In 1986, when it was released, the band bestrode indie rock like a gladioli-wielding colossus, churning out single after exquisite single, two of which – ‘Bigmouth Strikes Again’ and ‘The Boy With a Thorn in His Side’ – made it onto The Queen is Dead.

Featuring a grab bag of Morrissey’s enduring lyrical obsessions, from ’60s cinema to the joys of hanging out in cemeteries, The Queen is Dead is the Smiths at their most ridiculous (is there a worse song on any Smiths album than ‘Vicar in a Tutu’?) and (mostly) sublime: 31 years later, ‘I Know It’s Over’ and ‘There is a Light That Never Goes Out’ have lost none of their heart-crushing majesty.

Now The Queen is Dead is getting the reissue treatment, including a new 2017 master of the original album plus additional recordings (demos, b-sides and alternative versions) and, on some formats, the Live In Boston album recorded on August 5, 1986. The reissue comes as a double CD, a triple CD + DVD set, and a 5-LP box set.

Want to win the 5-LP set? We’re giving one away, along with a Queen is Dead slip mat and tote bag. Just look at all that swag!

To enter, just email us at info@thespinoff.co.nz your favourite Smiths memory, long or short, by Friday 17 November, when we’ll select a winner. Open to New Zealand residents only.