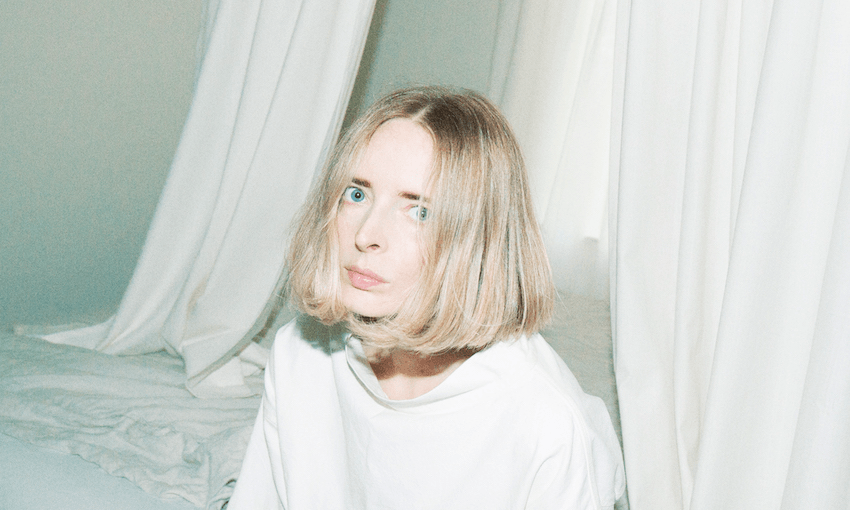 Chelsea Jade, art school popstar: ‘I just want us to feel like we’re in it together’

Millie Lovelock talks to Chelsea Jade ahead of her return to New Zealand for Wondergarden festival.

In 2015, I was lucky enough to catch one of Chelsea Jade’s last New Zealand shows before she upped roots and moved to Los Angeles. It was a freezing midwinter Dunedin night, and Chelsea played to a captivated audience in a sticky basement bar. In the midst of the dark and grime, Chelsea’s set was radiant. Now, on the back of bright, award-nominated singles – and ahead of a highly anticipated album – she’s headed back to New Zealand for Wondergarden. I caught up with her to talk about what’s changed since her last New Zealand winter.

The Spinoff: You recently played your first show in LA and you had a whole set up with additional singers and even dance routines. Will you be doing something similar at Wondergarden?

Chelsea Jade: Very similar if not slightly expanded. I’ve got more time on stage at Wondergarden so I get to play with the dynamic. There are more opportunities to let both big and small moments get limber.

The writing in your latest singles feels very Californian to me – it reminds me of Joan Didion in that it’s very clear and spacious at the same time as it is obliquely personal. Do you think that this is the way your writing was headed before you moved, or has your writing been influenced by LA?

Strangely, at the LA show, I had somebody approach me to ask if something I had written was a Renata Adler reference and they were spot on! I’d like to think all of the women I stay well read with are ever-present with me, helping me to be a better writer. Joan though – I wish. I’ll keep downing breakfast Coca-cola until that’s true. I definitely identify with her austere version of California.

I think moving has transformed my writing completely. I used to give myself too much time and space. It’s like I didn’t trust that I had the goods to blitz it. I was always second guessing and eliminating ideas before they had even made an exit. There’s really no time for that in LA. Now I try to be prepared always so that when sessions happen, I’m more focused on how to make my ideas dance with the vibe instead of being preoccupied with whether things are ‘good’ or not. I’d like to think I have honed my taste enough to instinctively determine that aspect and that I have enough self-esteem to know that my worth doesn’t hinge on the last line I wrote. That is how I used to feel.

Following on from that spaciousness, New Zealand is linguistically and socially very small compared to the USA. Do you think that playing your newer songs to a New Zealand audience will introduce a performative distance between yourself and the audience? Or will a New Zealand audience really highlight the more intimate and maybe even idiosyncratic parts of the songs?

What I always want in performance is a level playing field between me and the spectator. I’m not interested in hovering above anything. I think I used to try to be confrontational with an audience to get that feeling. I either spent my own fear of rejection projecting a sort of aloofness onto a crowd or possibly they already possessed it. Now I just want us to feel like we’re in it together. I want an audience to know how important they are to the experience – like it’s so warm we melt into each other. I’ve only become more honest and I hope that helps the songs to feel borderless and scalable in any direction.

You’ve described the record as “overtly bright,” does it feel extra special to introduce something so bright at a summer festival?

I just hope we don’t overheat in our turtlenecks.