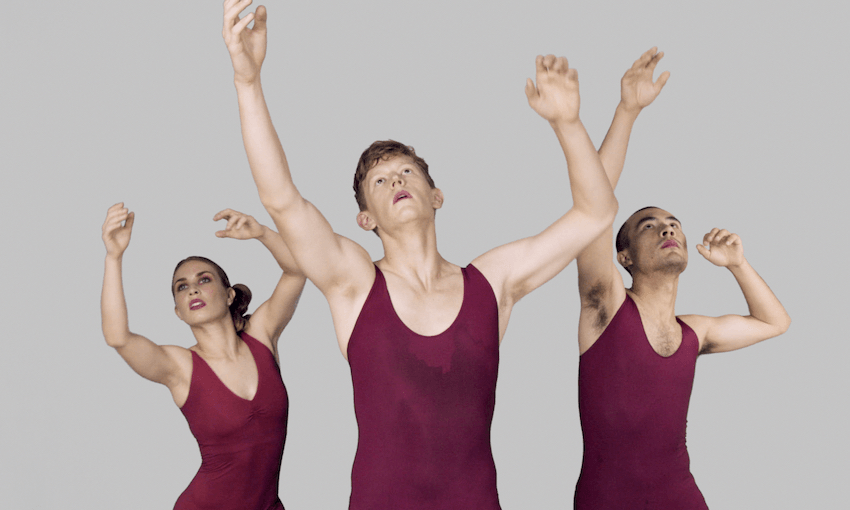 Boycrush’s new album Desperate Late Night Energy is out tomorrow. Ahead of its release, The Spinoff presents an exclusive premiere of the video for ‘100%’, featuring Yumi Zouma.

Alistair (Boycrush) and I stumbled across a strange corner of (stock photo and video website) Shutterstock that had a whole series of bizarre clips of people acting and dancing in front of a green screen. It was like we reached the bottom of the stock footage barrel and it was amazing – lots of terrible dancing and awkward corporate scenes. Dudes in ill-fitting suits talking into phones or giving fake presentations. It was late at night and we just sat for hours watching these clips while blasting the song, marking which ones we felt worked.

We edited together several versions of a ‘100%’ video entirely with that stock footage before we realised it’d be a lot more fun and a lot less constrained if we shot it all ourselves. Even so, the whole video heavily draws on the peculiar stock footage world we found and its aesthetic. Some of the shots are even re-enactments of our favourite stock clips that we couldn’t let go of.

We were really lucky to work with Chris Parker, Micheal McCabe and Olivia Tennet on the video, with a cameo from Sam Harman. They all have great comedic timing and got the weird vibe we were after – plus they’re pretty amazing movers.

Alistair Deverick (Boycrush) on the album:

In finding the moods for the album my main concern was the yearning no-man’s-land I often find at the end of a long night; captivated by stray patches of refracted light, consuming more than one might need, clinging to dying remnants. It sounds dark but I don’t mean it to be overly so, it’s more like outside of regular time. Like the Twin Peaks scene with the man sweeping the floor – a moment where you are fully present and there is no sense of time passing. I feel that feeling in a dark club and when I meditate and when I come back from a run and read spiritual literature and drink coffee on an empty stomach. It transcends my everyday experience.

The lyrical material, besides the above, ranges from mansplaining to Remuera-mum-materialism to pining unrequitedness, and I built so successfully on the Boycrush theme of featured singers that every song is now a guest spot without me at all. I like to think that ‘the artist is present’ (to quote Marina Abramovic) though.

In early stages of construction, the titular scaffolding for Desperate Late Night Energy were choice extracts from a list of dance terms I found on Wikipedia. I didn’t know what any of them were really but I just liked the vibe, the feel of modern dance sits very naturally with the music. Some titles eventually stuck and these remain on the final tracklist as testament to its roots: ‘Demi-pointes’, ‘Frappé’ and ‘Primitive Squat’.

I would love for you to listen to it when you leave your house to go and meet someone and you’re a little excited. It’s nice outside, perhaps a little crisp, but it’s just you walking across the bridge with your headphones on.