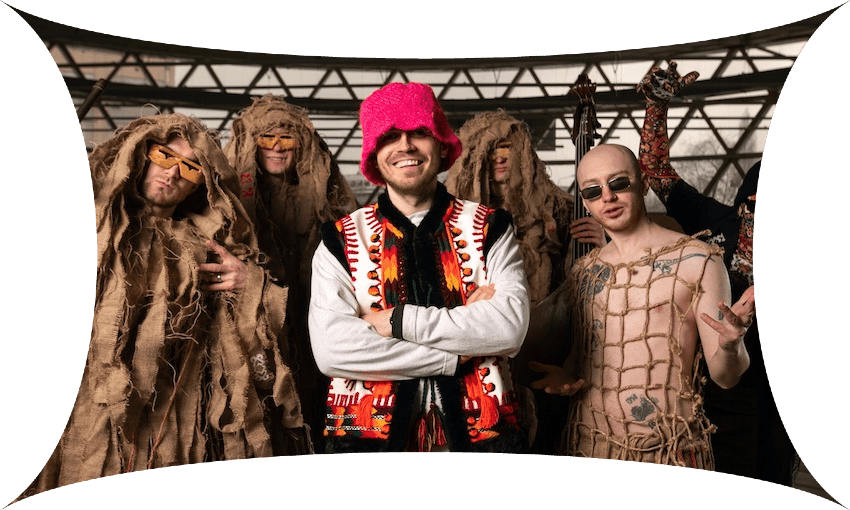 By Robert Deam Tobin
Guest writer
Made possible by

The Eurovision Song Contest is more than a pop music contest – it’s a reflection of Europe’s changing politics, values and cultural attitudes. And this year, the contest feels more political than ever.

This year’s Eurovision Song Contest – an annual celebration of pop music in which nations compete to win the votes of judges and the public – takes place on May 14 in Turin, Italy. And Ukraine is overwhelmingly the favorite to win.

While the latest odds first and foremost reflect the widespread sympathy throughout Europe for besieged Ukraine, it certainly helps that the Ukrainian entry, Kalush Orchestra’s “Stefania,” hits the right notes when it comes to Eurovision. Combining traditional folk sounds with modern hip-hop, the song is sentimental and upbeat at the same time.

Originally penned as an ode to the lead singer’s mother, “Stefania” has since become an anthem for the nation at war.

Sung entirely in Ukrainian, it showcases historical costumes and traditional instruments in a firm stamp of Ukrainian identity, while also effectively merging a melodic chorus with the global rhythms of hip-hop. Overall, the song reflects something of Ukraine’s resilient attitude in the face of Russian aggression as well as its pro-Western cultural leanings. Indeed, one member of Kalush Orchestra declared: “Our country will not only win the war, but also win the Eurovision.”

Russia was intent on competing this year as well. In February, however, the European Broadcasting Union, the organization behind Eurovision, banned Russia from the competition, under mounting pressure from other participating countries over the invasion of Ukraine.

I have long studied Eurovision as a cultural and political event. If Ukraine does win, I believe it will continue Eurovision’s ongoing legacy of marking the boundaries of the liberal West. Despite the popular and ephemeral nature of its songs, the event has, since its inception, reflected the political, culture and geopolitical realities of Europe.

They had a dream

Founded in 1956 by the European Broadcasting Union, the Eurovision Song Contest is the longest continuously running televised international musical competition in the world, with an enormous audience of roughly 200 million people. Will Farrell’s 2020 Eurovision spoof “Story of Fire Saga” and a recent NBC spinoff of the actual event, the American Song Contest, hosted by Snoop Dogg and Kelly Clarkson, have piqued interest in the U.S.

Over the years, Eurovision has expanded from a small group of six Western European nations to over 40 competitors from all over Europe, plus Israel and Australia.

It has grown roughly in tandem with other European and European-focused organizations, such as the European Union and the North Atlantic Treaty Organization. Like those economic and strategic blocs, Eurovision expanded into the Mediterranean in the 1960s and ‘70s, and to Eastern Europe after the fall of the Berlin Wall in 1989. Over the decades, the contest has pushed and readjusted the boundaries of “Europe,” both geographically and ideologically.

Eurovision’s definition of Europe’s geographical boundaries may not be intuitive for many viewers. The European Broadcasting Union follows the 1932 Madrid conference of the International Radiotelegraph Union, which set the eastern and southern boundaries of the “European Region” at the 40th meridian east and the 30th parallel north, “so as to include the Western part of the U.S.S.R. and the territories bordering the Mediterranean.”

Israel and indeed all countries bordering on the Mediterranean are thereby eligible to participate. Adjustments were made in 2007 on those boundaries to allow the nations of the Caucasus to participate.

Australia’s inclusion is a different matter, going back to 2015, when the European Broadcasting Union invited the country, on the basis of its unusually strong fan base, to join for a celebration of the 60th anniversary of the competition. The Australians arrived with such energy and enthusiasm that they’ve stayed ever since.

The ever-increasing number of participating countries has expanded and stretched the understanding of which countries belong to Europe as a cultural entity.

More complex and nuanced is the ideological and political meaning of “Europe.” The European Broadcasting Union’s stated “core values” include democracy, pluralism, diversity, inclusion and freedom of expression.

But those values have at times rubbed up against the political realities of countries within the geographical boundaries of Europe.

When Spain hosted the contest in 1969, Austria boycotted on account of Spanish dictator Gen. Francisco Franco’s fascist politics. Spain hosted because it had won the year before with Massiel’s “La La La”; the winning nation has usually hosted the following year’s competition since 1958.

The European Broadcasting Union tries to hold to the ideal of a purely musical competition without political overtones, but some countries have tried to insert sly political critiques into their entries.

In 2009, Georgia attempted to protest Russia’s 2008 invasion of its country with the song “We Don’t Want to Put In” – a play on the then-Russian Prime Minister’s name. But organizers rejected the song as too obviously political.

On the other side of the political spectrum, the European Broadcasting Union rejected Belarus’ 2021 entry, “Ya Nauchu Tebya (I’ll Teach You)” by the band Galasy ZMesta, for its overt condemnation of that country’s pro-democracy protesters.

In recent years, the contest’s strong association with the LGBTQ community has seen a backlash from conservative governments. Turkey’s departure from the contest in 2013 came as its interest in joining the European Union waned. While Turkey had multiple reasons for leaving, the head of Turkish Radio and Television objected specifically to the prominence of queer performers like Austria’s Conchita Wurst, who won in 2014 with “Rise like a Phoenix” as a gay bearded drag queen. In 2020, Hungary also withdrew from the competition; Andras Benscik, a commentator on a pro-government television station, likened the contest to a “homosexual flotilla.”

The winner takes it all

Success in the Eurovision Song Contest has often come as countries move toward the liberal, inclusive, pluralistic, democratic ideals of Europe. Spain’s victories in the late 1960s, for example, preceded the relative loosening of societal restrictions in the final years of the Franco era. Turkey’s victory in 2003 came at the height of that country’s campaign to join the European Union.

Most notably, the countries of Eastern Europe, which started competing in the 1990s, embraced the contest as symbol of Western freedom. After Estonia became the first former Soviet Republic to win in 2001, Prime Minister Mart Laar announced, “We are no longer knocking at Europe’s door. We are walking through it singing.”

Ukraine fits into this pattern perfectly. Entering the competition in 2003, it won the very next year in 2004 with Ruslana’s fiery leather-clad performances of “Wild Dances.” In 2005, Ukraine sent GreenJolly, which performed “Razom Nas Bahato (Together We Are Many),” a celebration of the Orange Revolution. More recently, Ukraine was victorious in 2016 with Jamala’s “1944,” an elegiac meditation on former Russian dictator Josef Stalin’s forced removal of the Tatars from Crimea.

The historical reference allowed Ukraine to circumvent the European Broadcasting Union’s prohibition on politics by claiming to investigate and commemorate an event from the past, while also obviously protesting Russia’s 2014 invasion and annexation of Crimea.

Assuming Ukraine does well or even wins, the Song Contest will reconfirm and reestablish the boundaries of liberal Western Europe.