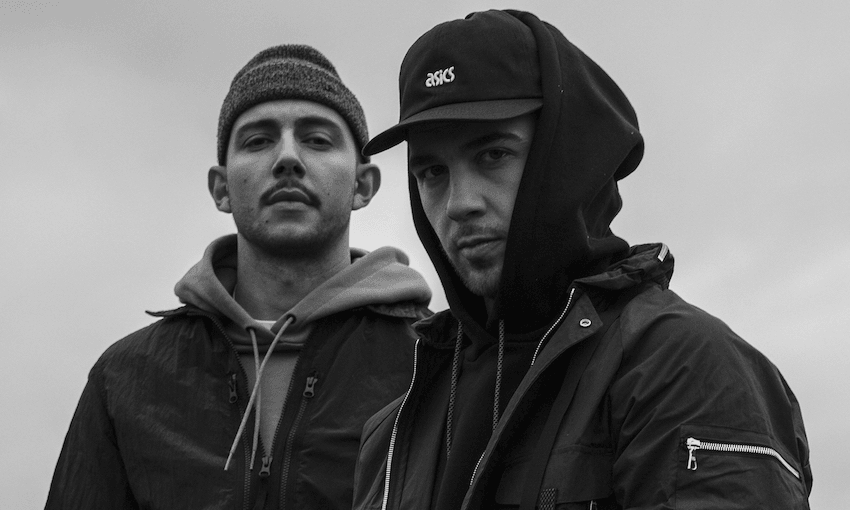 Majid Jordan: ‘Things could fall apart in so many different ways’

Hussein Moses speaks to Majid Jordan, the Toronto duo making noise thanks to one hell of a co-sign from Drake.

While Drake might be experiencing whiplash right now after getting owned in a rap beef he started then breaking records with his album Scorpion, the Canadian superstar has put together an impressive roster of artists with his label OVO Sound, including PARTYNEXTDOOR, dvsn and Majid Jordan – the Toronto duo who co-wrote Drake’s mega anthem ‘Hold On, We’re Going Home’ and ‘Mine’, the subtle, slow-burning highlight from Beyoncé’s #flawless self-titled fifth album.

Singer Majid Al Maskati and producer Jordan Ullman first met while studying at the University of Toronto and the pair’s own music, including their 2016 debut album and last year’s follow-up The Space Between, swings back and forth between smoldering, earnest R&B and booming pop music.

On the phone from Toronto, just over a month out from their one-off Auckland show at the Powerstation, it seems that Drake’s shadow still looms large. Local music journalists were instructed to “focus on Majid Jordan” during interviews, not Drake or OVO Sound. Instead, like seasoned vets, they’re quick to go out of their way to hype up their impending visit. “I’ve met some people from New Zealand – just from around the world – and they always tell me how incredible it is and how scenic it is,” says Al Maskati. “I always find them super kind so I’m really looking forward to going there.”

What are some of the things you do that help you get in the right mindset to go out on stage and play to thousands of people? Are there any pre-show rituals you could share?

Majid: I think the more that we do this, the more we realise we’re very comfortable on stage. We love performing. We just try to make the most of the day, even before the performance. We try to go and explore the city, we try to be with our friends, maybe make some music. Usually, we have something around us, like someone playing a video game or music being made or Jordan producing. The energy’s alive so when we get on stage, we’re not breaking stride.

You were born and raised in Bahrain before you made the move to Toronto. Is there anything from your Middle Eastern upbringing that has stuck with you now that you’re a little older?

Majid: It’s crazy. I was thinking the other day, when I left Bahrain, did my parents know they were just giving me up to the world? I was 17 when I moved out and it was like, I don’t know if I’m ever going to come back. It’s not guaranteed, you know? I don’t think I’m going to go back anytime soon. I don’t get to see my loved ones. I only see them once a year if I’m lucky, but I speak the language fluently and I understand the culture completely. It’s slow moving over there. It’s very laid back. It’s a desert island. So I feel like it’s frozen in time. Anytime I do go back, the same people are still around and the same things are still happening.

What was the moment when you felt like things were really starting to fall into place for you, career-wise?

Jordan: I think when we were really making the first project – the debut album – we got to that point. We had already collaborated with Drake and worked with everybody. Since After Hours, it was really the first project that we fully worked on to complete. Once we got to that point, it was really a breakthrough moment knowing that we love to make music and we really love to do this.

Majid: I feel like things continue to fall in place in different ways. You start with one platform and then you move onto the next one and it keeps expanding. Right now, things are falling into place in the way that we have a studio on the go – we’re able to work from anywhere. It took us awhile to get there and we are also now building a studio of our own. A physical location that we can always go back to, so we’re able to work remotely and then we’re able to have a home base too.

A lot of other artists would dream of breaking through like you have, but is there an example of one of the downsides that has come with that success?

Jordan: Honestly, I don’t really think so. I’m very grateful for the life that we live. I think it’s always important to stay grounded and know that, and give to the world as much as you possibly can.

Majid: It’s easy to lose sight of what you’re doing, or what you love when you don’t stay grounded like that. Just keep the people that keep feeding that energy around you. I think don’t dwell on the downsides – understand them for what they are, learn from them and continue to move forward. We’re so lucky to have what we have and things could fall apart in so many different ways, so we’re just focusing on building right now.

What other advice would you give to young artists who are looking to emulate the same sort of success that you’ve had?

Majid: Wake up and make music every single day.

Jordan: The risks that you take as an artist are ‘you’. That’s your originality, so take as many risks as possible.

Is writing for other big-name artists something you can see yourself doing more of in the future?

Majid: For now we’re just content on working on our own music, at this point in time. We’re not saying it won’t happen or will happen, but right now Jordan and I are just reconnecting because we’ve been on the road – we did like 50 shows, North American and European tours, and we’ve already done four festivals – so it’s been a lot of live performance. We’re just focusing on getting back in and writing ideas and starting from scratch.