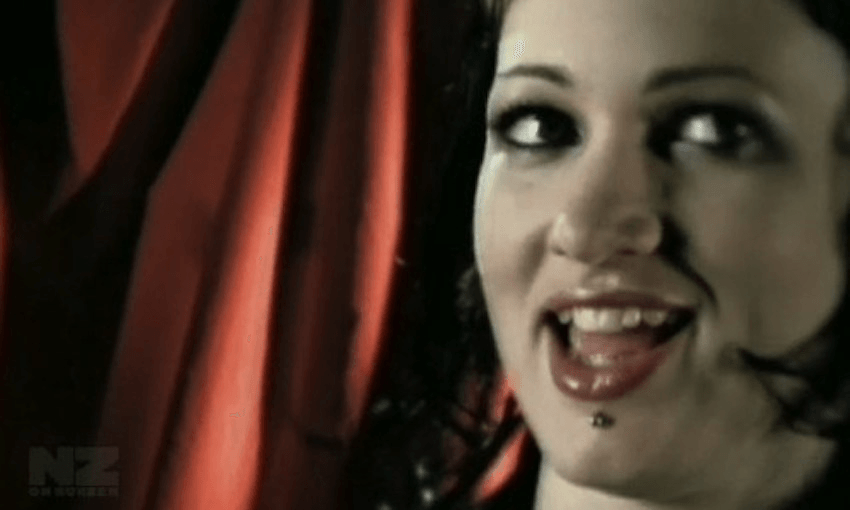 Rejoice, for ‘Lydia’ by Fur Patrol is finally on Spotify!

In 2000, Fur Patrol dominated the New Zealand singles chart with ‘Lydia’, a song that merely a year later would be voted the 19th best New Zealand song of all time. And finally, 18 years later, ‘Lydia’ is streaming on Spotify. Tom Augustine pays tribute to a New Zealand classic.

Some of the songs that we have filed in the Great New Zealand Songbook lexicon are, when you think about it, pretty damn weird. For every ‘Sway’ or ‘Don’t Dream It’s Over’ there’s an ‘I See Red’ by Split Enz (which sounds like a person losing their mind in particularly fiery fashion) or ‘April Sun in Cuba’, with its coy Castro flirtations in amongst the easy-going summer vibe.

Don’t get me wrong, I love all these songs, and genuinely think they are all most deserving of the love and legendary status they hold. The songs that become truly immortal in New Zealand canon often transcend their actual subject matter in the way that, for better or worse, so many great songs are ultimately divorced from their actual meaning (think Bruce Springsteen’s ‘Born in the USA’ or Third Eye Blind’s ‘Semi-Charmed Life’ or Van Halen’s ‘Jump’ or The Rolling Stones’ ‘Brown Sugar’). It becomes less about what the songwriters were thinking or going through when they wrote the songs, and more about the feelings you had listening to your parents singing along to them when you were a kid.

When I was a kid, they rebooted the beloved ’80s show RTR that counted down the top 20 songs of the week. This was appointment viewing for music lovers (and groups of people who get weirdly obsessed about lists, of which I am sadly a member). For a long period in the early noughties, there was a song that stuck in or around RTR’s top 5, stubbornly refusing to move: Fur Patrol’s ‘Lydia’. It was the bane of my existence. As a kid blessedly free of emotional angst, ‘Lydia’ went right over my head. Why was this bitter, seething song about an ex who has moved on before the author had, blowing up the chart so relentlessly, at the expense of N*SYNC and Christina Aguilera? There was weightless, sugary pop to be played – I didn’t have time for this! Then there was the video – set in an almost poisonously garish, velvet-draped bar reminiscent of Twin Peaks’ Black Lodge, positively dripping with irony and sarcasm designed to repulse my barely formed sensibilities.

And yet. All these years later, those saccharine pop songs rarely if ever run a rotation in the jukebox in my head. But you know what does? Fur Patrol’s bloody classic ‘Lydia’, one of the best damn songs ever written in New Zealand. An intensely personal song, it comes from the wonderful Julia Deans, whose work is always unsparingly intimate. The song is trademark noughties, and yet its sound wouldn’t be out of place in either of the decades that directly preceded it, with is positively hormonal bassline and Deans’ crooning of ‘my baaaaybeeeee’ wriggling into your brain with alarming persistence.

In the video, Deans (backed up by her band air-playing their instruments for some reason) plays both the spurned lover and the titular Lydia, the object of the clearly incredibly douchey dude the song is addressed to. The reveal of Deans as the new girlfriend is genuinely surprising, and something I didn’t really pick up on back in the day but adds a fascinating element to the reading of the song, suggesting that the new people our exes move on with aren’t really who we should be aiming our rage at, but at our exes themselves. Then there’s that famous eye-roll as Deans spits out ‘Lyd-ee-a’ early in the song, a defining music TV moment for my generation.

But perhaps what makes ‘Lydia’ so damn good is its singularity in the Kiwi music canon. While many other Kiwi greats have a certain irrepressible New Zealand-ness to them (the way ‘Why Does Love Do This To Me’ or ‘Slice of Heaven’ bang in that way that immediately makes you think of summer holidays and pohutukawa trees), ‘Lydia’ is a sound all its own, sticking out like a sore thumb on your Nature’s Best CD. Something tells me Deans and Fur Patrol wanted it that way.

The song is great – particularly as it builds to its climactic final chorus, allowing Deans to let loose on the vocals as the band finds emotionally intense ways to capitalise on the song’s established rhythms (with the aid of a well-timed organ stab or two). And finally, after a long, long time, ‘Lydia’ is finally available on Spotify, coincidentally around the same time as Deans has released a new album, We Light Fire. Go and listen again and appreciate a true New Zealand classic.

Welcome 'one of the most exquisite short novels you’ll ever read' to the Top 10.
By The Spinoff Review of Books
⚖️
19th August, 2022