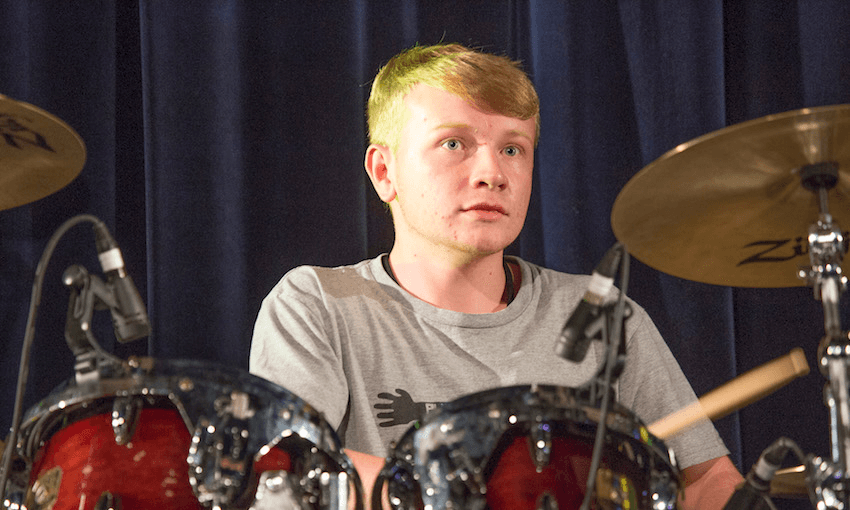 Changing our approach to autism through music (and some common sense)

By Mike Chunn
Guest writer
Made possible by

Play It Strange CEO Mike Chunn met a young autistic drummer and quickly realised how hard things were for those with Autism Spectrum Disorder, especially the young.

When Play It Strange and Rotary Newmarket supported the recording of 16-year-old Kane Chong’s song ‘We Are One’ – a track dedicated to his severely autistic best friend, Connor – there was great excitement in the ranks. It was late 2016. The song, recorded at Neil Finn’s Roundhead Studios and featuring Jordan Luck on lead vocals, turned out magnificently. At a celebratory gathering not long after, a Rotarian, Neil, mentioned to me that he had a 16 yr old autistic son, Nick, who was going to my old school, Sacred Heart College, and was learning the drums.

“Can he find some musicians, a singer and form a band?”

“No one will play with him.”

“What about some of his friends?”

“He doesn’t have any friends. He’s never had a friend.”

I was angry. And in disbelief. How does this happen?

I mentioned this conversation not long afterwards to someone whose niece was on the autism spectrum. “That’s how it is,” they said. “They’re the ones who have a birthday party at maybe 6, 7 years old. Balloons at the gate. None of those school friends who are invited come. She stands at the gate waiting. No one comes. The next year – there is no birthday party.”

It was now 2017; I rang Neil and said “Play It Strange is putting on a concert soon and I want your boy, Neil, to play drums with me. We’ll put together a band – he and his drum teacher playing together. I’ll play bass. My son Barney – guitar. Luke Hutchinson from the Rockshop on lead guitar and Sacred Heart old boy Jake – he’s a great singer.” And we did form that band and we rehearsed. Nick hit those drums like every bad moment of his life was laid out before him waiting to be crushed, banished.

At the concert, we played ‘Rust In My Car’ by Citizen Band, and the Clash’s ‘Brand New Cadillac’. Nick played with such determination, such flair. He was in the zone.

Earlier this year we ran another concert. Nick took the stage without his teacher and played the drums on ‘Different’, the song by May Zeng (Westlake Girls High) which won the Lion Foundation songwriting competition last year. Faultless.

And at the Sacred Heart College ‘Legends’ showcase recently, Nick played solo drums to a backing track. He received a sustained ovation.

How can we make the change? How can we have it that neurotypical students at school who are not diagnosed understand, respect and include those on the Autism Spectrum Disorder (ASD) in their day-to-day lives and activities? And how can we ensure that those who are diagnosed and who are often supremely talented in whatever environment they are focussed on – often musical – are given the chance to take stages, perform in school recording studios and just feel, and know, they are part of the team?

Let’s make 2019 the year that New Zealanders make the effort to bring about the change. It’s not about science or scrolling through websites or finding controlled corners that they can be put in. The ASD youngsters have much to offer. Yes, in their struggles and conflicts, they will find day to day life a challenge, but that doesn’t mean that we have to only make it worse.

If your child brings homes an invitation to a birthday party from the kid at their school who is autistic or diagnosed with any phobic or anxiety psychological disorder, go out and buy a present and walk down their driveway past the coloured balloons and make their day.