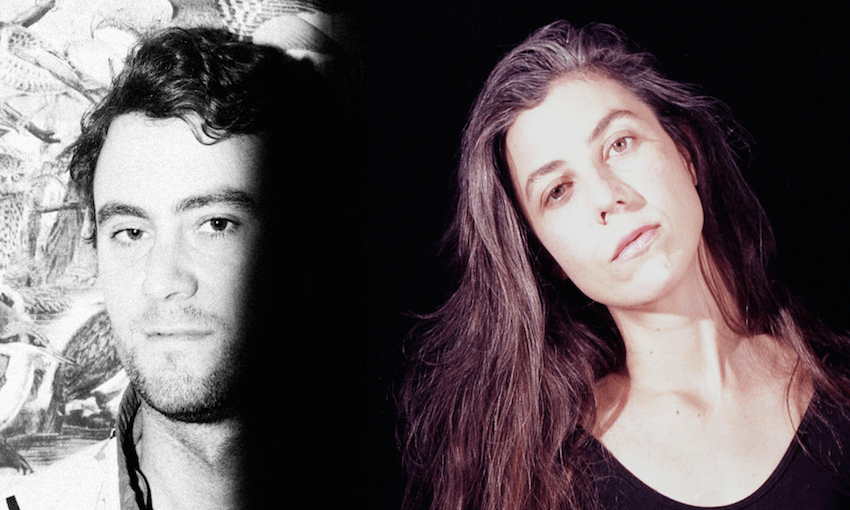 Acclaimed experimental musician Julia Holter, whose latest album Aviary appeared on multiple year-end lists, is playing in Auckland next week. Her opening act, Ryan McPhun, interviews her ahead of her show.

Ryan McPhun: I saw you at Jazzhouse in Copenhagen in 2013 and I believe you were a 4 piece then. Will you have similar setup in NZ? I’ve seen some live footage of you guys on YouTube and it’s usually a similar setup to what I saw years ago. Do you ever perform with larger band configurations? That would be awesome to see.

Julia Holter: Yes! There will be six of us, it’s (almost) the full band from Aviary – Dina Maccabee (viola,violin, electronics), Tashi Wada (synth, bagpipe), Sarah Belle Reid (trumpet, electronics), Corey Fogel (drums, vocals), and me. It sounds really insane, so big and amazing, I’ve never quite had a situation like this where it sounds like the record in a serious way. I’m really excited to share it and to finally be in New Zealand.

Your compositions and productions can be quite dense and expansive at times but there often seems to be a pop sensibility to the vocal melodies and delivery. Who, if any, are your influences on the poppier side of the scale?

Influences is always hard, what comes to mind immediately are people like Alice Coltrane, Kate Bush, Robert Wyatt. But then again, they maybe they aren’t necessarily ‘poppy’. I listen to a lot of stuff like Prince too!

The new record sounds very collaborative and dare I say, jammy – not exactly an easy mood to achieve in solo laptop and keyboard mode. How much of Aviary was sketched out before you went to the studio with the full band? Did you have ideas or charts for all the instruments or did you tell the players to just ‘go’? I’m listening to the yappy-bird like horns of ‘Everyday Is An Emergency’ where the horns sound like pitched down oyster catchers yelling at you to keep away from their nests along shoreline of a beach.

I’m pretty specific about what I write for the musicians for recordings, but also a lot of times I’m writing it for those specific players in mind, so there’s a lot of room for their creativity and voice in there. A quick way of describing the process is I record myself improvising ideas at home and then I edit that down, and then I transcribe it to be recorded more carefully with added lyrics, either by myself or with musicians in a studio.

The way I communicate music can be written or spoken or even just expressed in the demos, but most typically I will have a chart of some kind with harmonies and with specific melodies in certain places, supplemented by a demo.

So, in the case of a song like ‘Words I Heard’, all the parts I wrote out and notated in time traditionally. In the case of ‘Every Day Is An Emergency’, the second half was notated (without designated rhythms aside from the piano part, as with ‘Colligere’) but the first part I wrote out the idea in words.

For example, here’s one of my notes:

“2 (or 3?) “high” instruments hocket back and forth, with varying note durations, as loud as they can in their highest registers. any pitches they choose but, over the course of a few minutes, starting high and gradually descending as they individually choose (not descending by regular intervals, make it kind of “random”, sometimes descend by semitone, sometimes by a 4th, etc). end at lowest registers (if get to lowest pitch and other person isn’t done yet, keep playing that pitch), hold, start to gradually fade out on that note”

I read that one of the influences of the new record was the Vangelis-penned Blade Runner soundtrack. Will you ever make a synth record? Maybe you could borrow a CS80 from someone?

I have been waiting for someone to let me borrow a CS80! I absolutely want to do that! I kind of think of Aviary as a starting point for that and want to make an Aviary 2 that has CS80 throughout – there’s a new synth called Deckard’s Dream that’s modeled after the CS80 and I want it really bad!

Have You in My Wilderness had some of your most concise compositions, one could call them pop songs even. Aviary seems a bit of a departure from that, an odyssey of sorts clocking in at just under 90 minutes with most tracks over the 6 minute mark. Was it a conscious effort to eschew directness this time around or were you just going with where the wind took you?

Honestly I was going where the wind took me! Wilderness was working within a tradition of ballads more, and so I think I wanted to be free and explore sound without being restricted by narrative as much, so that was Aviary.

When I was younger I naively thought that classical musical training was a creative inhibitor, that there was an inverse relationship between mastery and creativity, whether that be piano playing or producing or whatever.

I read that you had a teacher at your music conservatory in Michigan and upon hearing that you’d begun recording your own music had said something like ‘you can’t do that, that’s note real composition’. Do you think that in the end the skills you learned in your music education broadened your vision and abilities rather than restricted them?

I think that it did help me and I really respected and liked all of my teachers at University of Michigan, even if I disagreed with a couple of them in retrospect – that’s normal and healthy – and I loved that school in general.

I had trouble in the music school because I was confused, but that doesn’t reflect on the school as much as myself; school’s always hard for people, no matter what it is. I think having teachers challenge you, whether directly or indirectly, is important.

I also think you don’t have to go to school to make music, because there are plenty of challenges and lessons in real life, but I did happen to go to school and so I think I was lucky in that way to have the experience of studying a very specific kind of music, in this case Western classical music.

In 2016 you delved into the world of soundtracks composing the score for the Ben Younger film Bleed For This and more recently scoring Carl Theodor Dreyer’s 1928 silent film The Passion of Joan of Arc. Did you find the process of creating an audio component to an existing piece of film challenging or no? Liberating? Stressful dealing with Hollywood director types?

Yes and I also have scored a TV show called Pure that premieres this month! I love scoring so much and hope to do it more. I find it really freeing to work on someone else’s project and follow their vision, and honestly just do what they want. It can be strangely liberating, and also a fun challenge to come up with a specific palette of sounds for a film and work within that soundworld.

In that way it’s not unlike an album, actually, but I love following the screen and trying to underline emotions and being kind of invisible.

Julia Holter plays at the Tuning Fork on the 24th of January, with Ryan McPhun (The Ruby Suns) playing support. You can buy tickets here.