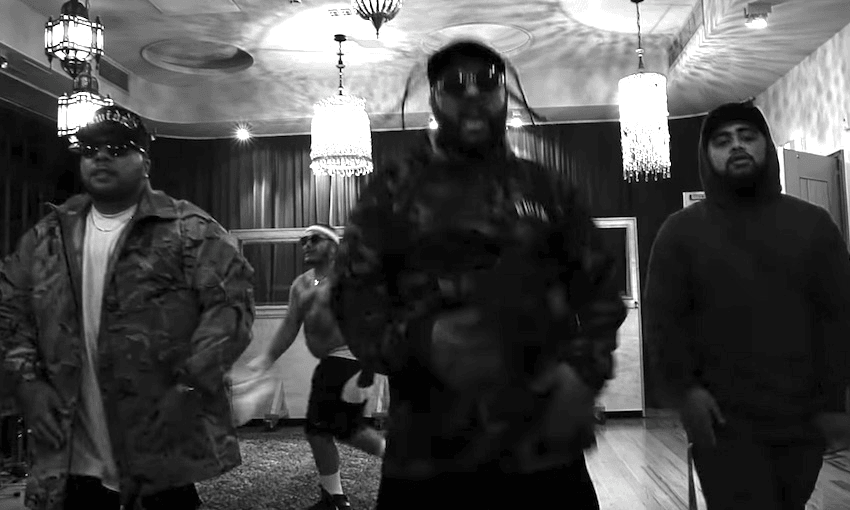 By Sam Wicks
Guest writer
Made possible by

With two Tui awards, a gang of iTunes chart entries, and a buzz that can’t be bought, Onehunga rap collective SWIDT was rightfully crowned 2017’s number one draft pick. Eager to capitalise on the wins, Spycc, INF and producers SmokeyGotBeatz, Muavae and Boomer-Tha-God have surprise-released The Bootleg EP: odds and sods from the Stoneyhunga sessions designed to extend their run. With the EP out and a sophomore album in their sights, we checked in with Spycc about SWIDT’s game plan for 2018.

Sam Wicks: The last time The Spinoff caught up with you, it was on the bus route SWIDT put on the map. At the time, you told Henry Oliver, “We might start doing movies, we might start writing kids’ books.” How have the goalposts shifted since then?

Spycc: I guess those sorts of goals will always be in our sights. We’re just creative people, man. We don’t want to be confined solely to the music, but music is definitely the vehicle to get us to those spaces. As far as shifting the goalposts, I always feel like the sophomore is such a hard follow-up for so many artists. We really want to come harder than we did with Stoneyhunga, pretty much.

Yeah, throughout the process of creating Stoneyhunga we had songs that were done and some that were half-done. To us, they were quality pieces of work but they didn’t fit the theme. Wanting to start the year off strong and holding the fans over… just because of the climate in music these days, you need to be getting fed on the regular.

Were there any debates about whether any of these cuts should have made the album?

Yeah, to an extent, eh. We’re pretty much on the same wavelength when it comes to that kind of stuff. If anyone did want to put a certain song on, everyone would state their reason why they didn’t think it fit, and it was pretty chill – like, ‘Yeah, you’re right’.

“Like Jonah Lomu on attack”, “It’s the Crusader, tight like Nathan and Aaron Mauger”, “Sonny Bill 04, from the beginning I’ve been winning with my dogs” – New Zealand hip-hop’s rich with footy metaphors. Jason Taumalolo gets a mention on ‘Conquer’. How long have you been waiting to stitch his name into a song?

Being from New Zealand, we always want to prop up our local stars in whatever sport they’re in. I guess the timing was perfect. When we started creating ‘Conquer’, it had that feeling of invincibility, fearlessness, doing what we wanted to do.

Last year with [Mate Ma’a Tonga] and especially Taumalolo, how he opted out of playing for the Kiwis, he wanted to play for his country of origin. And then with all the moves he made, all the criticisms he received, and then how well Tonga did, it was just perfect. I wonder if he’s heard it, eh? That’d be dope.

On ‘Function’ you’ve got a line, “When my grandmother passed you know my heart was torn apart / I wish she lived to see me hit the stage or chart.” Was she a big supporter?

My grandmother passed when I was 14, I think. Yeah, she played such a big role in my life, especially with my mum being a single mother. My grandmother definitely helped me and my mum out in the early days and she was always supportive of anything I wanted to do. I felt like, with things going well, it would have made her proud that her grandson was doing something that he loved.

What’s been your mum’s reaction to what you’ve achieved?

Oh, man, she’s ecstatic, she’s over the moon about it. My mum’s like my biggest supporter. Even to this day she still comes to shows even though I don’t really want her to come. That said, isn’t it amazing that your parent would back you 100% and be proud of what you’re doing? Like, you can’t be too cool and be like, ‘Nah, there’s no other parents there, you can’t come!’ She could easily hit me to hook her up with free stuff but she understands that in order to make the dream work, you’ve got to support.

INF uses ‘Function’ to shout out Rakinos and Khuja Lounge (RIP). While the sound of SWIDT is future facing, a lot of your songs have a built-in nostalgia for an old Auckland. Do you think part of your responsibility as artists is to do bear witness to the era you came up in?

Yeah, I reckon that’s exactly it. We wouldn’t be where we’re at right now if places like Rakinos or Khuja didn’t provide us with a platform to perform for people. Because back then Twitter was around but it wasn’t popping like it is now, so you went to live shows to actually see people perform and stuff. We have to pay homage to that. Especially when we first came into the game. I remember times like [David Dallas] had a show up there called Mean As and he gave us a platform, even back to Home Brew doing shows at Rakinos. Those were memorable times.

The EP’s peppered with interludes. Given that you talked to us last time about writing kids’ books, have you thought about lending your voice for an audiobook?

I’d be into that. I’ve always wanted to do something with Boomer especially. Back in the day, we used to do hard-out lip-synching videos and that, and I swear he would have been the man on What Now, eh. It would be dope to even do something like Chappelle’s Show, you know, all the skits they did back then. It’d be fun to curate something like that. We need our own TV show!

As well as local artists like JessB and MeloDownz, you’ve got assists from DJ Mustard affiliate TeeFLii and Novelist, an MC who’s already put in studio time with SmokeyGotBeatz in London. Given the air miles Smokey’s claimed in the past 12 months, has he become a kind of default A&R?

Pretty much. The power of his connections and the people he’s worked with have definitely benefited SWIDT, for sure. He’s always thinking about the team and whether a collab would work or benefit us.

On top of The Bootleg EP, you released a loosie with Yoko-Zuna, and I’ve heard talk that your sophomore might not be the only SWIDT album delivered in 2018?

Who knows, who knows. There’s no rules. It’s the Wild Wild West out here.

Gucci Mane’s threatened to release a mixtape “every other day” this year. Is an artist like Guwop a model for commanding short attention spans?

Yeah, 100%. Just how long he’s been in the game and how relevant he’s become over the past two years. People who are really into the scene have always known about him, but he’s gone mainstream now. I think his model for releasing music all the time is how artists should be approaching the music game. You’ve got to capitalise on that. Back in the day, musicians used to release albums every four years sometimes. People wouldn’t last in this day and age doing that.

For us, the game plan is to keep doing what we’re doing but do it better, and just continue on our path to take the SWIDT sound global.

SWIDT play at 1:30 pm on the Spark 2 Stage at Auckland City Limits, sponsored by Spark, at Western Springs Stadium and Park on 3 March 2018. Tickets are available here.