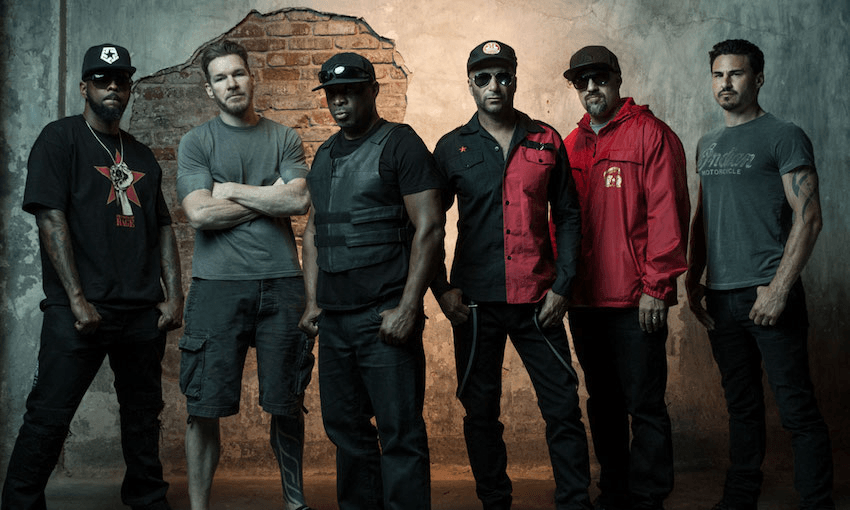 Prophets of Rage, an ‘elite task force of revolutionary musicians’, in five videos

Political rap/rock supergroup Prophets of Rage are heading to Melbourne’s Download Festival and a sideshow in Auckland (be in to win tickets and flights to that show – and five more Download sideshows – below!). Here are five videos of the ’80s and ’90s powerhouses who have combined forces to form Prophets of Rage, and fight the power in the age of Trump.

Prophets of Rage are a political rap/rock group formed by Chuck D and DJ Lord of Public Enemy, B-Real of Cypress Hill, and Tom Morello, Tim Commerford, and Brad Wilkin of Rage Against the Machine and Audioslave in early-2016, the year Trump was elected president. “We’re an elite task force of revolutionary musicians determined to confront this mountain of election year bullshit, and confront it head-on with Marshall stacks blazing,” Morello told Rolling Stone.

A combination of rap and rock from the ’80s and ’90s with an updated political rage (playing new material and old hits), Prophets of Rage aren’t here to mess around. Here are five songs to get you acquainted.

Public Enemy – ‘Louder Than A Bomb’

Cypress Hill – ‘How I Could Just Kill a Man’

One of the best rap albums of the early ’90s, Cypress Hill’s debut was a perfect encapsulation of their West Coast rap (as distinct from the LA gangster rap of the same period). Though the Cypress songs that have become classics are the stoner hits – ‘Insane in the Brain’, ‘Hits from the Bong’, ‘I Wanna Get High’, etc. – it’s worth digging into their not-about-weed material, and ‘How I Could Just Kill a Man’ is as good as it gets.

Rage Against the Machine – ‘Bombtrack’

Because ‘Killing in the Name’ has become a such a fucking classic, many have forgotten about ‘Bombtrack’, the opening song from the band’s self-titled debut and home of one of the heaviest riffs of 1992. One can only imagine how many wasted suburban teens lit shit on fire at parties while singing “burn, burn, yes you’re gonna burn” without a hint of irony.

So, when Rage Against the Machine broke up after singer Zack de la Rocha said RATM was “no longer meeting the aspirations of all four of us collectively as a band, and from my perspective, has undermined our artistic and political ideal,” all the other guys got together with Soundgarden’s Chris Cornell (RIP) to form Audioslave, combining ’70s hard rock with ’90s alternative, slightly smoothing out Tom Morello’s wild guitar but not losing the heavy riffage. ‘Cochise’ from their first album is as good a place to start as any. Vintage Cornell IMO.

Prophets of Rage – ‘Prophets Of Rage’

So, when you combine Public Enemy, Cypress Hill, Rage Against the Machine and Audioslave, what do you get? Prophets of Rage! And here they are reworking the song that gave them their name, ‘Prophets of Rage’, in prisons and in protest of the 2016 Republican National Convention. Fight the power!

Spark is giving away one Ultimate Sideshow Pass for two lucky winners, including flights and accommodation to Auckland, Sydney and Brisbane plus tickets to six Download sideshows including Prophets of Rage, Neck Deep, Limp Bizkit, Good Charlotte, Mastodon & Gojira and The Story So Far! Head to www.spark.co.nz/music and be in to win.