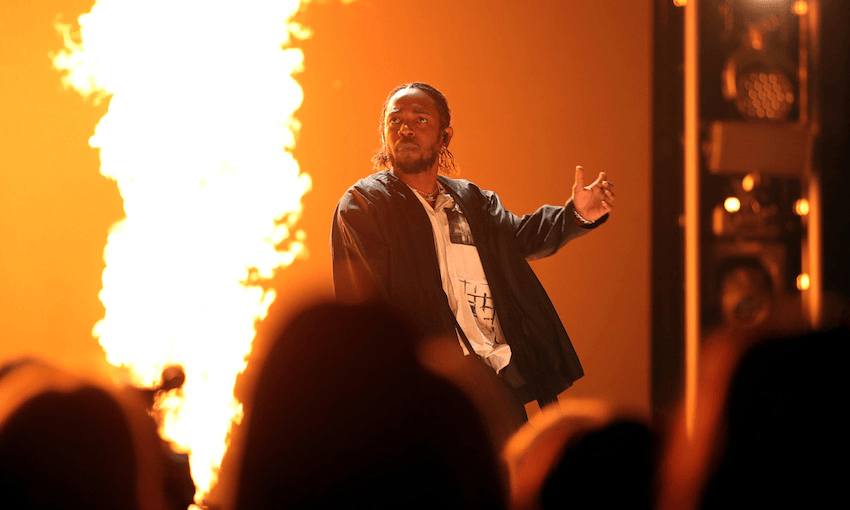 By Tamsyn Matchett
Guest writer
Made possible by

Kendrick Lamar has been on his DAMN. tour for more than a year. He will finish the 12 month marathon next week in Australia. Such a gruelling, brutal schedule is warranted given the huge mainstream success of DAMN., and its cultural importance and historic moment for US race relations. But this significance travels much further than the US, and to many other ethnic minorities around the world, including my own.

The last time we had the chance to see Kendrick was back in 2016 when he headlined Auckland City Limits. Having just released To Pimp a Butterfly, the performance was full of the funk and soul energy of that release. DAMN. is notably different in energy and intention which made for an entirely different feeling show.

I was pleasantly caught off guard at how representative the audience was of our wider community, here in Aotearoa. As ticket prices continue to soar, I am always concerned at how that will impact the equitable access to stars like Kendrick. Despite my concerns, the crowd was a happy mix of mostly young and fly-as-hell rangatahi from all over, ready for a rap communion with the undisputed king of West Coast hip-hop.

Having peeked at previous setlists, I had a fair idea of what to expect and was prepared for the opening track, ‘DNA’. But not for the pyrotechnics that preceded his entrance; emerged in smoke, Kendrick appeared dressed in his Kenny Kung-Fu threads, and threw down from the start.

This song hits me hard. It’s primal. It resonates with me in a deeply personal way. It reminds me of how attached we, people of colour, are to our identity, our DNA, and how this is used against us in almost every example of systematic racism and oppression. This is why Kendrick matters; he confronts complex shit and makes it accessible. And despite being a straight banger, ‘DNA’ is also a blueprint for the most recent iteration of this rap superstar. This tour, and Kendrick’s brand of rap, is a celebration of identity, and ultimately of defiance.

Behind him, on what was one of the better quality visuals I have seen at Spark Arena, he reminded us he was more than Kung-Fu Kenny: Pulitzer Kenny was in the building, and was ready to rip through this set with that infamously effortless flow. It was also a reminder to us of exactly what this rapper has come to represent. His music is setting the bar for how popular artists can discuss complicated topics of oppression and race.

Throughout the evening he references struggle. He raps about warfare, being a soldier, fighting battles on all fronts, not only with those who might try to bring him down, but also his internal struggle with his own demons. As he performed, sometimes on his knees to the crowd, you could feel his humility. His ability to move from moments like that, to aggressive party vibes cue Dr Dre drums and strings, makes his style so accessible.

Kendrick’s music is deeply connected to location and community; it’s about recognizing yourself, your hood, your homies, your postcode. Tracks like ‘Backstreet Freestyle’, ‘m.A.A.d city’, and ‘Element’ all reference his hometown Compton. And on a reworked ‘Bitch Don’t Kill My Vibe’ saw him rapping about his connection to the West Dominican Republic, you really get a sense of how interlinked his identity is to his personal geography. Identity was such a strong theme throughout the night and most notably it’s the lyrics that deal with racial self-realisation that shine throughout.

Narratives from tracks like ‘Alright’ deal to the heart of his positive affirmation and sense of self in the wake of oppression: “And we hate po-po/ Wanna kill us dead in the streets fo sho’/ N****, I’m at the preacher’s door/ My knees gettin’ weak, and my gun might blow/ But we gon’ be alright”. The police presence post-gig, which was notably larger than any rock concert I have ever been to at Spark Arena, was again a reminder of commonalities we can draw from Kendrick’s experiences.

Of course, there were moments in the evening that made me uncomfortable. White dudes in linen button-up shirts rapping the N word during ‘m.A.A.d city’ or jubilantly celebrating that they were “gonna be alright” highlights that we are still not there, still not willing to recognise the complications that come with white consumption of black culture.

Kendrick’s music is so deeply rooted in racial experience it is valid to assume that if you are white, some of it just wasn’t made for you. As Solange so aptly expressed on her track ‘For Us By Us’: ‘don’t be sad if you can’t sing along/ Just be glad you got the whole wide world’. But I guess rap does that – it gives you a sense of belonging whether or not you actually belong.

Ultimately, this music will always resonate deeply with those who need it most. Those who understand what Kendrick means when he grapples with what it is to be black, what it is to not be white, in a world still very orientated towards white success. And I think that here in New Zealand, our communities of colour connect with artists like Kendrick because his experience feels and sounds familiar.

It was Kendrick’s blackness and how that translates here, to our tangata whenua, our pasifika, that hit me the hardest last night. We face similar issues of systematic oppression, to differing levels; we understand how economic slavery can break communities of colour and we live similar realities as a result. We too, cling to our identities, our post-codes. We too, feel loyalty and royalty inside our DNA. But most of all, we recognise that sound of diaspora so present in Kendrick’s music, the feeling of not quite belonging, or of being displaced, having land and sometimes even life stolen from us.

Similarly here as to the US, if you are a person of colour who is a musician or athlete you are accepted. Your humanity however, is less acceptable in other forums. And while our people might not be arrested in a Starbucks for just existing, we are still racially profiled every day, locked up in prisons at horrifyingly disproportionate rates, and vilified as violent thugs in the media. When Kendrick celebrates the complexities of his blackness, he enables us here, in Aotearoa to do something similar. To stand a little taller, talk a bit louder, be a bit prouder.

Last night I saw that. I saw beautiful, young, proud brown faces connecting to an international superstar in the most powerful of ways; no matter the struggle, music will always connect us to something bigger. Tonight, Kendrick was holding up his fist in the air, signaling to all who might recognise it, that he won’t be quiet. And that we shouldn’t either.

Rap is art. It is defiance. It is dissent. It is radical. It is punk. And it is black. And last night Kendrick was all of it.