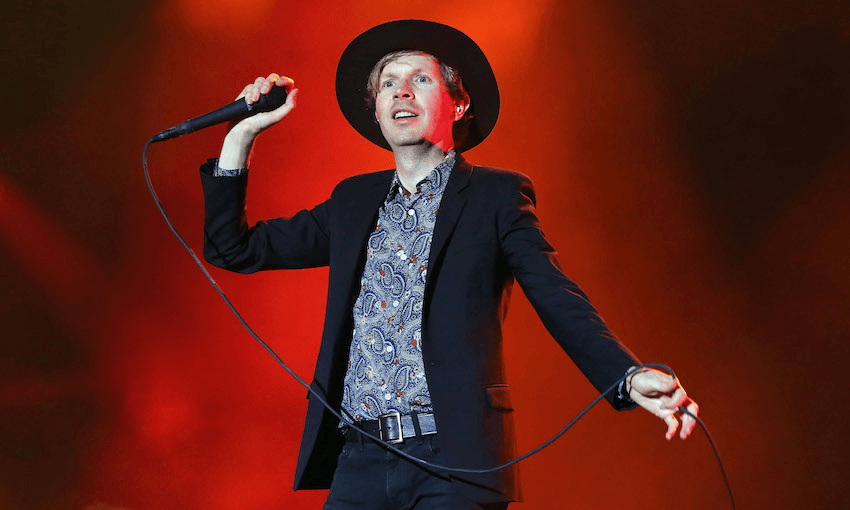 In the 25 years since he first appeared on the scene, Beck has left few genres untouched. To help prepare you for ACL, The Spinoff retraces his diverse career in two minutes.

In 1993, Beck was living in Los Angeles, working at a video store, playing so-called “anti-folk” music when he was discovered by independent label Bong Load Records and introduced to producer Karl Stephenson.

The two got together and in one afternoon recorded ‘Loser’, a song Beck had apparently had rattling around in his head for years, with Stephenson sampling Beck’s guitar and adding sitars and hip-hop-influenced drums under Beck’s non-sequitur lyrics.

The song was a hit and Beck became an anti-hero of the post-grunge 90s, combining the a slacker aesthetic with a stoned irreverence that eschewed early-90s earnestness.

His third album, and major label debut, Mellow Gold, one of three albums Beck released in 1994, turned him from a loser to a star. And his 1996 album Odelay took him to new critical and commercial heights

In the 20 or so years since, he’s released eight albums of genre-hopping weirdness, from tropicalia, funk, heartbroken folk, country rap, Psychedelic rock, expansive melancholia, and all the way back again.

His new album Colours would be called a return to form, except Beck never really lost it, he just mutated over and over again, revisiting his earlier sounds not as a return to his past so much as a natural continuation on his divergent journey.

Beck plays at 9:40pm on the Spark 1 Stage at Auckland City Limits, sponsored by Spark, at Western Springs Stadium and Park on 3 March 2018. Tickets are available here.