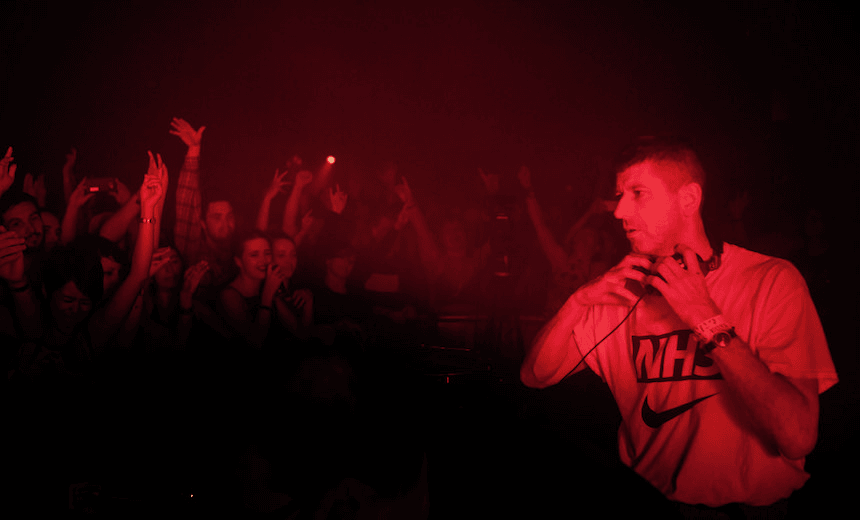 DJ duo Optimo: Krautrock and techno and disco! Oh my!

By Stevie Kaye
Guest writer
Made possible by

Optimo, the Glaswegian DJ duo of JD Twitch and JG Wilkes, are a byword for open-minded, anything-goes club nights, their sets incorporating anything from mutant disco to krautrock, techno to samba, industrial to ‘Dueling Banjos’ and John Carpenter themes. Stevie Kaye talks to the duo ahead of their return to New Zealand this weekend.

Founded at Glasgow’s Sub Club in 1997, Optimo ran every Sunday for 14 years, cultivating the sort of die-hard community a legendary, long-running institution deserves, before closing with a “Optimogeddon”. The six years since have been a victory lap around the world, taking them to places they never had the chance to with the weekly residency.

They first visited New Zealand with a Wellington show in late 2014, and this January they played Auckland’s Friendly Potential at Whammy Bar. And they enjoyed it enough that they’re back for more this Friday. This year saw their 20th anniversary which they celebrated with a mini-festival at Glasgow’s SW3 complex, with the likes of Nurse With Wound, Avalon Emerson, the Black Madonna and Antipodean tourmate Aurora Halal.

I first heard them in the early 2000s via their How To Kill The DJ (Part Two) and Psyche Out mixes, which towered above contemporaneous eclecticism with their breadth and depth – I still get chills with how Drum Attack!, a mix made for their website, suspends TV On The Radio’s ‘Staring at the Sun’ between Ricardo Villalobos’ avant-techno and Liquid Liquid’s punk-funk before dawning into Fela Kuti. Despairing of them playing New Zealand, in 2008 I actually started a monthly Optimo cargo-cult club night, Let’s Get Incredible!! in a K’Road loft. When I finally saw them in Amsterdam in 2011 (the first time I was in the Northern Hemisphere, in 2010, I’d detoured to Paris to catch them only to be thwarted by a French air traffic controller’s strike, c’est la vie), they insouciantly segued from a mid-90s Dutch house banger into the Lovin’ Spoonful’s ‘Summer in the City’ into Slayer’s ‘Angel of Death’, with the crowd in the palm of their hands.

The Spinoff: In an interview this year, you mentioned “morphic resonance” as how ideas can spring up simultaneously, like clubs with similar vibes such as Trash and Nag Nag Nag in the early 00s. Since you’ve been travelling, have you come across club nights anywhere in the world that have had a kindred spirit or a sense of picking up the torch, or even “getting Optimo wrong” in an interesting way?

JD Twitch: Absolutely. We have met a lot of kindred spirits over the years where we have instantly felt a strong connection and that we were on the same wavelength. Usually, this results in a long-term friendship and working relationship when such a connection is made (which is quite rare) it is not something that should be let go. We felt this with the Friendly Potential guys in Auckland.

I’m not sure about “getting Optimo wrong”. Sometimes people book us and tell us we were a major inspiration but then their taste in music is so divergent from ours that I wonder if there is a different Optimo and they booked us by mistake.

How was your Auckland show in January this year? Does having familiarity with a crowd alter what you’d play a second time?

JG Wilkes: Auckland was one of the highlights of that tour. Thank goodness we have promoters and party organisers like the Friendly Potential crew. Of course, because they invited us there was always the strong possibility of a strong musical connection to celebrate, but apart from that, you just get along with some people – and we just got along. Their DIY ethos for getting the party together and their determination to do exactly what they want in terms of what artists they invite to be “part of” Friendly Potential is how we operate when we put together an Optimo party. For us, it’s key. After the show was in place, they wrote and said that they wanted to add Aurora (Halal) to the bill and we were delighted of course. Aurora is a dear friend and came to Glasgow to perform at Optimo 20, we also played at her brilliant Sustain Release Festival outside New York too so it’s all connecting amazingly!!!

We are such massive fans of Aurora as a producer, a live performer and as a DJ too so it’s a proper treat to all meet down here. It was simply good timing and great vision from Friendly Potential that’s making it happen though, so thank you for that.

I would certainly say yes, that having familiarity with a crowd, even a room, makes you (able to, brave enough to) play differently and more interestingly. For a nervous type like me anyhow.

It’s quite a crazy life we have and something we are forever grateful for – that we can make a living from playing music and hopefully bringing something positive to people’s lives by doing it. That’s somewhere when I was starting out that I never expected to be and appreciate it so much. When you’re really far from home like this and you meet a good pal like Aurora who’s out there on tour as well, you feel a certain harmony with that friend for sure.

How is balancing touring and family / social life back home?

JG Wilkes: Generally, it’s Europe most weekends which means we leave Friday lunchtime and get back home on Sunday night having covered two cities. It means I’m away from my partner and my kids every weekend pretty much and I’m missing out on a lot. I know that. I also know how hard it is for my family – I know they miss me but I drive them crazy too sometimes so maybe it’s healthy for us all that I’m gone as much as I am. That said, with the exception of a few weeks with US tours, some trips like China, Japan and Australia / New Zealand I’m home all week and I don’t waste any time – I’m up at 7 am with the kids for breakfast, school run and then collect them at 4 pm and we eat together and do homework at night. I try to fit in what little bit of time I have at the studio (not a lot) and I go to bed at 10 pm. I’ve made sure we have a family holiday for 2 weeks in the summer as well for the last few years. I have no social life at home, so yes, it’s tricky enough to balance all this but I’ve never lived a very conventional life and I don’t think I could.

When you settled on Optimo as a name, were there any other names in the hat, so to speak?

JG Wilkes: Always finding new hot spots yeah! It’s not a perfect example as we’d been there before but we played at Manfredas’ party at Opium in Vilnius (Lithuania) a few weeks ago and have to say, to my surprise, it was one of the parties of the year. Everything just suited what we do so well – the crowd, the room, the sound, the hosts – it was crazy how it all lined up and panned out into such a wild night till 9 am! Actually, you could say the same about Auckland – we weren’t sure who or what we would meet there back in January and here we are – coming back for more.