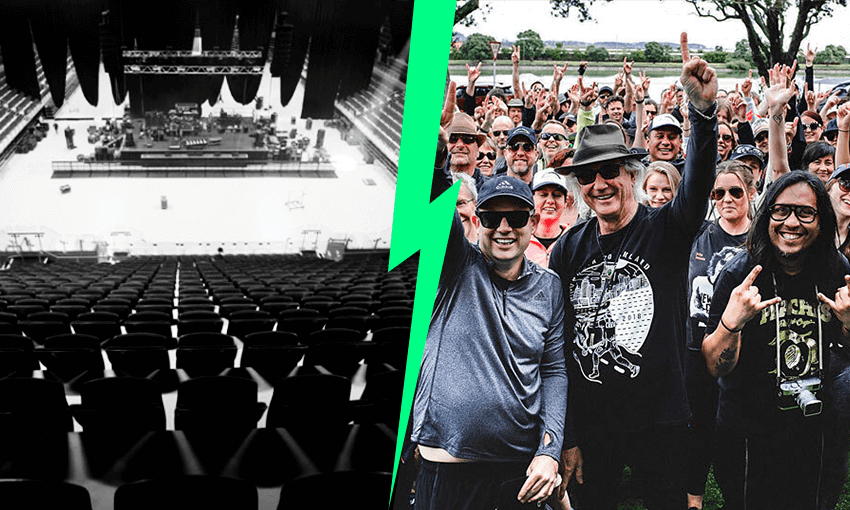 On the left: Spark Arena. On the right: The people who make shows happen here. (Image Design: Archi Banal)

One for the roadies: How a charity walk is supporting the music industry

On the left: Spark Arena. On the right: The people who make shows happen here. (Image Design: Archi Banal)

Covid-19 has hit everybody in some way, but the people who make live shows have suffered particularly hard. Charity Roady4Roadies hopes to lighten the burden, writes Sam Brooks.

One of the things many of us have missed most through the pandemic is going to see a big arena show. There’s nothing quite like the spectacle of it. But while it might be, say, Dua Lipa or Billie Eilish who’ll be back on our stages soon, those shows take a village to put on. And the villagers need your help.

Roady4Roadies is a charity walk taking place on April 29, with local legends Sir Dave Dobbyn, Neil Finn and Anika Moa lending their hands – and their calves – to the effort to support roadies, the people who get gigs on, whether they’re in 100-person venues or 10,000-person venues, make sure they run smoothly, and then get them to the next venue. This is the first time the walk has gone ahead since the inaugural event in 2018, which raised $20,000. That walk was intended to help people the community felt had fallen on hard times, due to a slowdown in international touring and an increasingly reliance on show-by-show contracts.

Tickets range from $35 to $100, with all proceeds administered by the music industry charity MusicHelps. The funds will  support live music road crews who have been financially impacted by the cancellations, lockdowns and restrictions wrought by Covid-19.

Those taking part will trek the 16km Coast to Coast walk through Auckland, from Onehunga to Spark Arena (a shorter 5km route is also an option). The walk ends at the arena’s Tuning Fork bar, where live music, nibbles and drinks will be provided to famished strollers.

“Look, it’s been a bloody tough year for the people in our industry,” says music promoter Brent Eccles, who also played drums for a number of 70s and 80s bands including The Angels and Space Waltz. “I’ve relied on roadies all my career as a musician and promoter, so it feels awesome to be able to do something to help them out.”

So exactly how hard have roadies had it over the past two years?

“New Zealand’s initial response, lockdowns, meant that we were eventually able to do shows when nobody else in the world was able to,” says Brooke Paterson, a veteran roadie who has worked on countless shows at Spark Arena and elsewhere. “That was really good for us, but obviously we were still hit by the border being closed. A lot of the shows I do in my place of work – international shows – disappeared.” Compounding that were the subsequent lockdowns, which meant that shows, both international and local, couldn’t happen.

“You would try to make plans to get as much work as possible, but with Covid looming over your shoulder, they could go away at any second.”

Even the current restrictions don’t allow roadies, especially those who crew large-scale shows, to do the work they’re used to doing. “We can’t really work because it’s not financially viable to split a venue up into hundred-people bubbles, because it requires a lot more manpower to staff that. We’re just doing odd bits here and there, trying to keep ourselves afloat while we wait for everything to start back up again.”

With big international acts including The Killers, Tyler the Creator and Alanis Morissette all set to play Auckland this year, roadies are getting ready to again do what they do best. So what does an average day look like for a roadie working on an arena show?

“We’d show up on the day of the show, having prepped the gear we’re taking down the day before, to make sure everything’s good,” says Paterson. On the day itself the team is at the arena by 7am to secure everything that’s hanging from the roof and make sure it’s safe. For example, the speakers used for large-scale events weigh a couple of tonnes.

After a break for lunch, “we’ll start setting up the stage and getting everything plugged in, all the instruments and whatnot, while the people in charge of the speakers make sure everybody sounds good.” That’s followed by a sound check – support acts first, then the main act. After the live show has wrapped, which can be as late as 11.30pm, the road crew spend hours packing down, packing out and taking everything back to where it’s stored.

In short: being a roadie is not your average nine-to-five job. It’s extremely physical, high pressure and intense. It’s also the kind of work you can’t jump right back into. “The only people that actually do it are really passionate about their job, they love their jobs. It’s a big part of who we are, and having that big part of ourselves just taken away out of nowhere is quite hard to deal with.”

While New Zealand was in orange and there were no gathering limits if vaccine passes were used, Paterson was able to find work on a  handful of shows, but she acknowledges that many of her colleagues were less fortunate. “A lot of the conversations going on in the industry are about if people can even call themselves sound or lighting people any more, because they haven’t done it in so long.”

Beyond supporting Roady4Roadies, what can people do to help out? Paterson has a simple answer.

You can buy tickets to Roady4Roadies here.