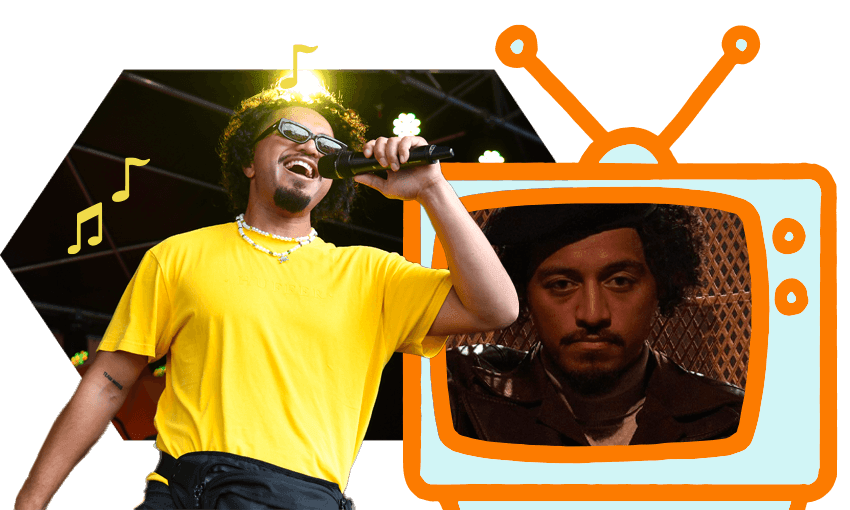 On Thursday night, Diggy Dupé gets to perform songs from The Panthers live for the first time. Photos: Supplied / Treatment: Tina Tiller

‘You’re going to move’: Diggy Dupé is bringing The Panthers soundtrack to life

On Thursday night, Diggy Dupé gets to perform songs from The Panthers live for the first time. Photos: Supplied / Treatment: Tina Tiller

Hit TVNZ series The Panthers came out when Aotearoa was in a level four lockdown. Now, rapper Diggy Dupé is finally getting a chance to celebrate by bringing his powerful soundtrack to the stage.

When The Panthers debuted to rapturous reviews and large viewing numbers last year, Tāmaki Makaurau rapper Diggy Dupé was, like everyone, stuck at home on his couch. He had a crucial dual role in the production, playing the show’s tough narrator while also helping curate a fitting soundtrack full of local hip-hop figures and R&B singers.

But, because of Covid, production was a stop-start affair, sometimes done in isolation. When the show landed in full on TVNZ+, the country was stuck in a full level four lockdown. “It was kind of a good time and a bad time,” says Dupé. “Everyone was home on their couches so they could watch it [but] we couldn’t go out and celebrate it.”

Now, the 30-year-old is doing his best to fix that. On Thursday night, Dupé is helming the first — and, possibly, only — live performance of The Panthers soundtrack in the Auckland Town Hall’s Concert Chamber. It’s a one-off for the Elemental Nights music festival happening this month that includes a series of mid-winter shows from the likes of Dope Lemon, Mura Masa and Jungle.

Dupé admits it’s challenging to present a set full of songs that he’s never performed live. He sees it as an opportunity to “do something with the show that I don’t really do with my other ones”. That means it’s the rapper’s first time on stage with a full live band, including a drummer, keyboardist, bassist and DJ.

So far, rehearsals have sounded “mean”, and Dupé is determined to do the songs justice. The TV show, which follows the rise of the Polynesian Panther Party in the 1970s at a time of increasing government and police attention, means too much for him to him to screw it up. He grew up in Grey Lynn, where many of the show’s key events take place.

“It’s so personal to me,” he says. “Getting to tell the stories of where I come from and now getting to perform it, and continue it … is an honour.”

Dupé’s staying quiet on exactly who will appear on stage alongside him on Thursday. “Obviously, we couldn’t get everybody,” he says. He felt awkward asking those who played smaller parts on the soundtrack to show up for the live show. “I don’t want to be that guy, like, ‘Bro, can you come all the way here, try and find parking in the city, and jump on stage for the chorus?’ I wouldn’t do that. That’s tough.”

Instead, he’s mixing it up. It won’t just be the soundtrack, song-for-song. Dupé says that wouldn’t work “sonically” in a live setting. Instead, there’ll be peaks and troughs that make the most of the artists who do come through. “It’s almost story-lining, like a movie,” he says. “You can’t have the climax halfway through and the end is chill. We had to structure it.”

For those who enjoyed the TV series, Dupé is confident they’ll also enjoy the show he’s put together. Hip-hop heads who dig his solo work, including last year’s debut album That’s Me, That’s Team, will also be into it. For everyone else, he promises: “It’s a real mixed bag. It’s good for all ages … you’re going to move, regardless.”

Diggy Dupé and friends present The Panthers at Concert Chambers on July 28.