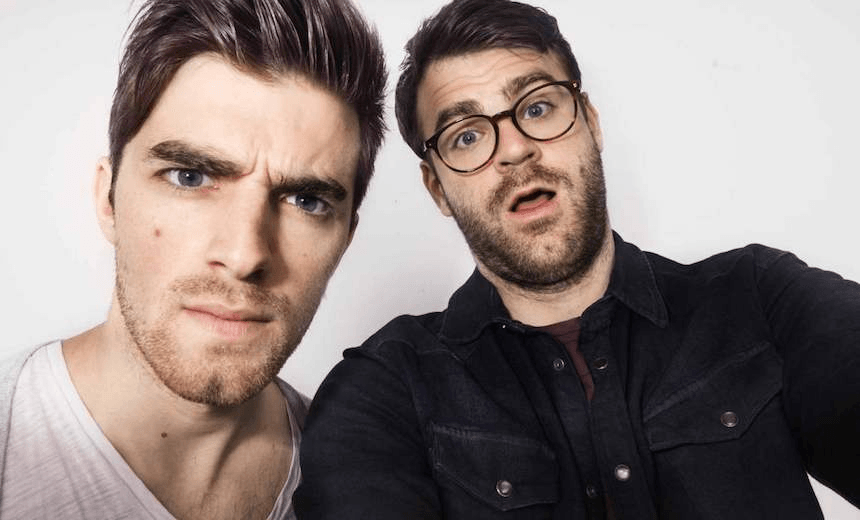 Chainsmokers superfan Kate Robertson has campaigned for the bros to come to New Zealand for years. In celebration of today’s news of an Auckland show, she shares her top 10 bangers.

Everyone has an opinion on the Chainsmokers. At the height of their Top 40 reign we couldn’t get our hot takes out fast enough, and a whole year on, not a lot has changed. There are hardcore fans, hardcore haters, and a hefty pool of those who might liken their songs to a new haircut that takes a good week or so to warm up to. They’re polarising, but love them or hate them, there’s something about the Chainsmokers that we can’t seem to get enough of.

They’re fascinating in more ways than we like to give them credit and have already had more evolutions than some artists will have their whole career. They found a following remixing indie pop songs in 2012, blew up the world over with ‘#SELFIE’ in 2014, rebranded by making lyricless choruses a thing we couldn’t get enough of in 2016, and most recently dropped an album that mashes mid-2000s emo-pop with preset EDM beats. There’s no other act that could get away with such madness and still top the charts, and it’s nothing short of brilliant.

In light of this morning’s tour announcement, it seems about right that I, a self-confessed superfan (see Twitter evidence below), should lay my cards on the table and put forward my Chainsmokers top 10. It hopefully paints a picture of where they started, what they made a name for themselves doing, and where they are at now as they head into the next leg of their full noise world tour.

Somewhere between ‘#SELFIE’ and ‘Roses’ the Chainsmokers crept onto the indie scene with this pleasant and often overlooked track. An ode to Yeezy himself, ‘Kanye’ found its way onto most of Spotify’s top indie playlists (although I’m sure the curators will deny it now), which might have allowed the duo to separate themselves from the song that sent them viral, but instead helped them start edging their way towards the sound they would later be known for. If you want to play a trick on your friends who are ‘too cool’ for the Chainsmokers, play this song next time you’re with them and bask in the satisfaction of them not realising ‘Kanye’ is a song by the Chainsmokers.

The latest single to be released from their debut album Memories… Do Not Open, ‘Young’ is a great example of just how far the Chainsmokers have gone beyond their comfort zone, and ours. On first listen we all expected ten different reworks of ‘Closer’, only to realise there would be none of that. Opening with a strum pattern reminiscent of songs we’ve heard before, you’d be easily fooled into thinking they’ve gone full All American Rejects on us, but then the chorus drops and it’s a stripped back pop drop! What!? How!? My guess is as good as yours as to how they pulled it off, but once you wrap your head around the colliding of genres, it does kind of work. True magicians if I ever did see them!

Bono gives an inspirational pep talk at the start of this track. That’s literally the only explaining it needs. He’s such a selfless human that he’s not even credited as a feature. I do not know why ‘The One’ was released as a single before this absolute gem. A bloody cop out in my opinion.

A bunch of DJs won’t admit it, but this remix plays in clubs all the goddamn time. If you’ve had a night out at Longroom, The Establishment or Baretta sometime in the past four years, you’ve 100% heard this remix. Hell, if we’d paid more attention to it back then we could’ve predicted the pop drop that was to take over the world in 2016. ‘Habits’ was an already great song, and this remix by no means topped the original, but it sits way up there for as far as remixes are concerned (because I think we can all agree there are way too many butchered pop songs floating around Soundcloud at any one time).

The most euphoric of the Chainsmokers’ songs and the one we should all be most excited about seeing live, ‘Don’t Let Me Down’ is a true representation of everything we grew to love about them. The song has it all: a clean and simple track, a strong female vocalist, a gradual build, and the biggest goddamn pop drop of all time. If ‘Don’t Let Me Down’ isn’t the final song of their set, I’ll be demanding a refund on my ticket.

It’s no secret that I dragged this song when it first came out, but like the aforementioned haircut, turns out it just took a little easing into. ‘Something Just Like This’ was released off the back of the 2016 takeover and at that point we’d only had one teaser of what we were to hear on the album in the form of ‘Paris’. The success this song has had in New Zealand is yet more evidence that everyone but me liked this song, and I’m ready to admit defeat. Chris Martin is great, the Chainsmokers are great, and this sparkly, low-key jam is the least abrasive track the dudebros have released all year.

The song might be terrible, but it’s due a lot more credit than we like to give it. ‘#SELFIE’ changed the game. It was the first smash hit to shamelessly embrace social media and the vanity it instills in us. Taking selfies in public isn’t a big deal these days, and the Chainsmokers have a big part to play in that. If it was really that bad it wouldn’t have done as well as it did. Like it or not, ‘#SELFIE’ resonated a little bit with all of us, and even if the band refuse to acknowledge it these days, we can never forget.

‘Paris’ was the Chainsmokers’ first go at mashing their synth-heavy pop-drop with emo soft-rock, and seven months on it’s still the best they’ve come up with. Even Drew Taggart’s vocals – the ones that got him dragged after the VMAs – only add to the song’s rosy nostalgic haze. Lyrically, they learned from the mistakes on ‘Closer’, but still held onto what did land with people – the romanticising of what would otherwise be a pretty beige moment in time. ‘Paris’ might make you cringe a little, but it does so in a way that is nothing short of indulgent. 10/10, have been spinning all year and will continue to spin until the next generation of superstar dudebros come and sweep me off my feet.

If ‘#SELFIE’ is where it all began, ‘Roses’ is where things properly began. Expertly released at a time when we’d all but forgotten they were the ones who did that song about selfies, ‘Roses’ catapulted the bros to new heights. The was played in every club, topped the viral charts, and became the anthem for Saturday morning kitchen dance parties in all-female flats across the country (my own flat included). So sparse on lyrics, you couldn’t go wrong singing at the top of your lungs, and in retrospect I’m wondering why on earth this song isn’t more popular in karaoke bars?

The kids trying to crack it on Soundcloud will drag it any chance they get, the lyrics technically don’t make sense, and there was that uncomfortable VMA performance. Yet despite all the hurdles, ‘Closer’ still came out of 2016 as the song of the year. It was a year in which pop music hit an apex that we might not see again for decades and boy oh boy did the Chainsmokers take the side out on a high. I don’t even know how this song worked in clubs because the bpm is so slow, but it just did. When MTV is airing a ‘Best of 2016’ countdown in 20 years time, I’ll look forward to telling the youths about this band called the Chainsmokers, and how they changed the pop music game.

The Chainsmokers grant Kate her wish and play Spark Arena on Tuesday 24 October. Spark Thanks have an exclusive pre-sale for Spark customers, available from 12pm Monday 31 July to 12pm Wednesday 2 August.