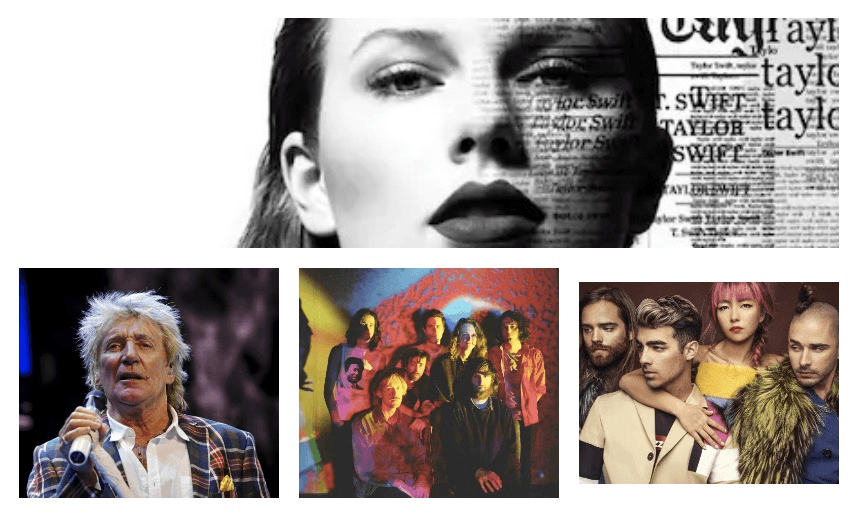 Best Songs Ever: Taylor Swift has absolutely botched it and Rod Stewart is still alive and singing

Our regular round-up of new songs and singles, featuring Taylor Swift’s return and an attempted relevance revival for Rod Stewart and Hot Chocolate…

LEISURE – Alone Together
Ahhhh Leisure, the sex gods of New Zealand music, and maybe the world. I think all of us except for killjoy Henry Oliver can agree the band’s self-titled album was one of the slickest releases of 2016, and so it comes as no surprise that their latest single ‘Alone Together’ follows suit.  So how does it stack up against ‘Got It Bad’, ‘All Over You’ and ‘Nobody’? That would depend on whether you’re expecting something different or much of the same. A little more subtle than some might be expecting (and subsequently taking a little longer to warm up to), the group still prove themselves to be smooth as hell and as desirable as ever. There definitely isn’t the same crashing onto the scene that came when they first formed, if only because we’ve grown accustomed to what they’re capable of, but ‘Alone Together’ should still make the cut for whichever R18 playlist you keep buried in the depths of your Spotify. / Kate Robertson

Taylor Swift – ‘Look What You Made Me Do’
Ever since ‘Love Story’, new Taylor Swift projects have been an event. She’s a deeply complex public figure, both basking in and attempting to distort the nature of the spotlight, to have different rules apply to her than to her peers. And even when it’s felt like she’s grossly over-reached – her disposition through feuds with Katy Perry and Kanye West felt unseemly, like that of a hedge fund manager on a winning trade – she’s been able to get away with it thanks to the scale of her success.

That relied on a string of near-perfect pop singles running from ‘Love Story’ through ‘Blank Space’ which were mostly melodically brillliant, musically distinctive and, crucially, able to transcend generations and locations to build one of the most imposing global brands in pop culture.

As of now the string is snapped. ‘Look What You Made Me Do’ isn’t as awful as its harshest early reviews have suggested, but it’s a close cousin: an ideas-bereft indulgence that is, even by Swift’s standards, smugly self-obsessed. Worse, it’s boring – recycling you-won’t-like-me-when-I’m-mad lyrical conceits she’s been exploring since at least ‘Better than Revenge’, released early in Obama’s first term.

The sentiment would be just about passable if it were wrapped in a confection as addictive as ‘Style’. Instead it’s a bizarre euro-trash revival taking quasi-industrial early ‘90s synths (co-credited to Right Said Fred, of all fucking people – that needing to happen should have maybe been a tell) and trying to make them fresh. Even if it were successful it would be unoriginal – Charli XCX was playing with them five years ago and Justin Timberlake five years before that. But it’s cold and disengaged, and leads to a deeply unsatisfying hook with no melodic payoff. Which is to say that the one thing she’s always had in hand is entirely absent.

Add that to the rightly-scorned imagery for the forthcoming Bad Reputation and we have the appearances of the era being over. The only caveat to that is that the lead singles from her last few albums have been unreliable predictors of the quality of their parent albums. So it’s certainly too early to write her off. But those who’ve been shorting Taylor Swift stock for years are celebrating her first unequivocal musical failure right now. / Duncan Greive

Openside – ‘I Feel Nothing’
The group’s tightest single to date, ‘I Feel Nothing’ is a total bop, and I mean that literally – an absolute sitting at your desk bop. It’s also a step away from the pop punk Openside started out with which was rad, but didn’t help with the ongoing Paramore comparisons and kept them stuck in a bit of a mid-2000s bubble. It’s no secret that the current pop music environment is in no way accommodating to pop bands, and I wish so badly that this song had been released at a time when Kids of ‘88 reigned supreme and Bieber was wishing for one less lonely girl, but that being said, it shot up the NZ Viral Top 50 so maybe I’m just moving in the wrong circles and Kiwi listeners deserve a little more credit. With a hook so catchy it’d give Pharrell a run for his money, ‘I Feel Nothing’ will get you through your Friday arvo, and even if pop’s not your thing, at least give it a hoon to appreciate the group pushing beyond the pop drop. / KR

King Gizzard and the Wizard Lizard – ‘Tezeta’
This is awesome. If UMO at their most psyched out and jammy is your thing, or you just like to chuck on something that you can zone out to after a long-as day, consider starting with Sketches of Brunswick East, King Gizzard’s new album. Hell, it’s worth it for ‘Tezeta’ alone; an early highlight that sees the Melbourne act pay homage to Ethio-Jazz mastermind Mulatu Astatke. Made in collaboration with newish Stones Throw signee Mild High Club, it’s a jazz-heavy album that doesn’t really feel like one at all (I know how stupid that sounds, but trust me). It’s also King Gizzard’s third of five records planned for this year. It’s a bit daunting if you’re trying to play catch up – they’re a ridiculous 11 albums deep – but the fact that they’re pulling it off at all is kind of amazing if you ask me. / Hussein Moses

Rod Stewart & DNCE – ‘Do Ya Think I’m Sexy’
No classic rocker has been purely coasting for quite as long as Rod Stewart has. He hasn’t released a great record in at least 35 years (if you count Tonight I’m Yours as great – if you don’t it’s 41 years back to A Night on the Town), yet constantly releases new music, whether it’s those terrible Great American Songbook albums, or his okay 2010s efforts at writing songs again. That songwriting bug stuck with Rod as long as it meant he might move some records, so when he didn’t it was time for a shameless stab at the charts – which is exactly what this reworking of his 1978 disco hit ‘Do Ya Think I’m Sexy?’ is. Rod’s been down this road before: faceless techno group N-Trance recorded a fairly bad version in 1997 (it was number 1 in exactly one country – New Zealand) but this is worse, his collaborators DNCE turning the already reasonably lightweight song into a piece of lazy douche-pop vaguely reminiscent of the Chainsmokers, wherein the 72 year old Rod painfully chimes in over the top from time to time, like a senior citizen sent to find his granddaughter at a party, but who tragically gets confused and lost. I love you Rod. Please stop. / Pete Douglas

Few bands have had as many essential pub jukebox hits as Hot Chocolate. ‘You Sexy Thing’, ‘Every 1’s a Winner’, ‘It Started With a Kiss’, ‘Emma’… just massive, massive tunes. The band have been operating without original frontman Errol Brown (who died in 2015) since 1992 – they toured with fellow English soul legends The Real Thing (‘You To Me Are Everything’!) as recently as last year according to the band’s official website, hot-chocolate.co.uk. Unfortunately, the website doesn’t have any information about the mysteriously digital double A-side that dropped on Spotify this week. ‘Could Have Been a Lady’ is a re-recorded version of one of the band’s first singles originally released 1971, a classic Hot Choc rocker with a trademark scorching lead guitar line from Harvey Hinsley. ‘Another World’ is a more reflective number that captures the band’s soulful side with grace and restraint; whether it’s another re-record, an unreleased track from the vaults, or all new material, it belongs up there with the band’s best. / Calum Henderson