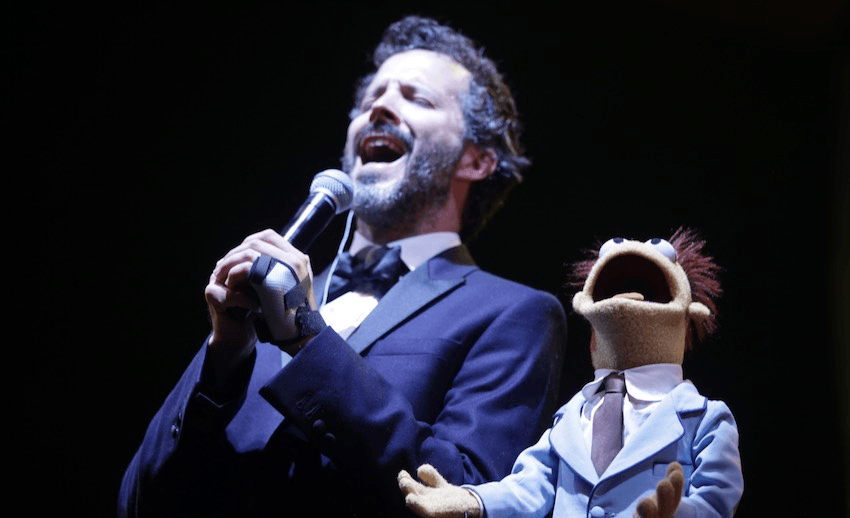 We review the entire country and culture of New Zealand, one thing at a time. Today, Alex Casey goes to The Jim Henson Retrospectacle: Live in Concert and cries a bit.

‘Tis a wild sensation indeed to get whole-body starstruck by a bit of felt and some faux fur. But as the house lights went up and the audience waved at one very special guest performing in The Jim Henson Retrospectacle concert last night, I simply couldn’t move my limbs to join in. In a room full of local celebs – Jemaine Clement and Sam Wallace – it became patently clear that no crummy old human star can outshine a muppet in the flesh.

Flesh? You know what I mean.

The problem with the Jim Henson Retrospectacle concert is that I want to tell you everything but I also want to tell you nothing at all. Topping off Wellington’s three week celebration of all things Jim Henson, the concert spectacular combines the New Zealand Symphony Orchestra with the songs of the Henson universe, hosted by Bret McKenzie and the characters of Sesame Street, Fraggle Rock and The Muppets, live on stage.

Here’s what I can tell you: I cried twice (both times during ‘Rainbow Connection’). Every time a new cute and loveable childhood pal bounded out on stage I thought I was going to vomit in my mouth a bit. They’ve arrived on our shores at the same time as The Avengers: Infinity War, but it’s clear which venture is the most ambitious crossover of all time. Some characters dressed up for the occasion, others brought their rubber duckies.

Some have an extra large suite booked out in Zealandia, if you know what I’m saying.

Henson’s cultural appeal transcends generations, without ever having to hammer home winky-winky Shrek-style jokes about boning. The kids sitting around me seemed to enjoy it, sure, but it was their parents who sat transfixed, quietly singing and clinging to huge Ernie soft toys that may or may not have ever belonged to their young children at all. A woman held up a small Kermit toy, swaying it back and forth like a lighter for ‘It’s Not Easy Being Green’. Sam Wallace was smiling. We all were.

Come for the characters and the excellent music, but stay for however in the name of Count von Count the muppeteers manage to move smoothly across the stage. “He’s a puppet,” a kid behind me whispered sagely, “I can see the hands.” A huge screen creates the more conventional TV-style framing of the characters as they sing and interact with Bret, but to watch the muppeteers sweating and singing and flinging themselves around in their own intricate choreography, is well worth a geeze down below.

As the MC for the evening, Bret McKenzie had the immense task of keeping the characters in line, balancing their mayhem with his extremely laid-back energy. But he was far from phoning it in, particularly when belting out ‘Man or Muppet’ – the song that won him an Oscar in 2012 – and charging around the Michael Fowler Centre for a karaoke version of the David Brent classic ‘Mahna Mahna’. There was no shortage of meta-comedy either, particularly when the muppet/man dichotomy all but melts away.

While I’m genuinely unsure if there is anything funnier than Fozzie Bear following up a bad joke with an extremely enthusiastic “waka waka,” I laughed basically non-stop throughout the show – pausing only briefly to well up and peer at Sam Wallace. Brief music breaks come in footage from Jim Henson’s extensive showreel, including early advertisements, sequences from Dark Crystal and fitting cameos from Statler and Waldorf, plumbing the depths of the rich, ridiculous universe he created.

It’s not often you walk away from a show entirely free of cynicism, drinking in sentiments like “keep believing, keep pretending” – ones that you’d probably roll your eyes at if you saw them in cursive on an Instagram feed – without question. The night ended on an equally tender note from Henson himself, to simply leave the world a better place than when you found it. I reckon the Retrospectacle concert did just that.

VERDICT: Are we humans? Or are we muppets?