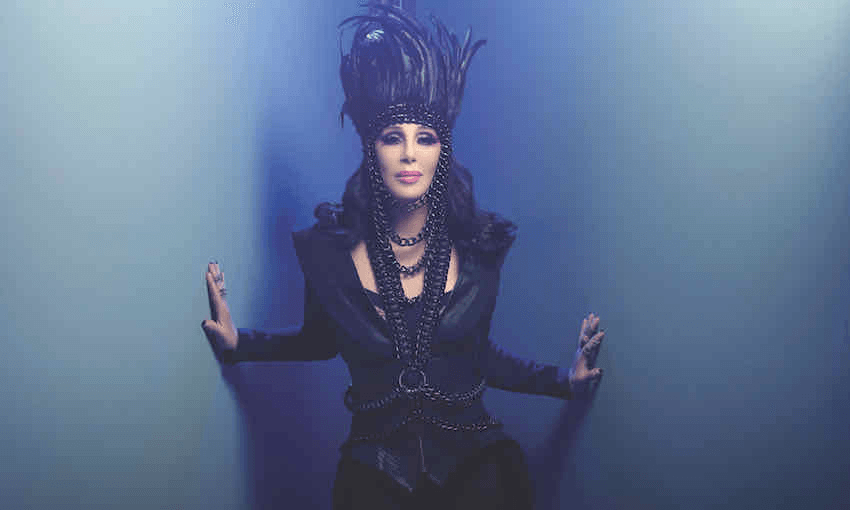 The many faces of Cher: a celebration

Cher is coming to town! Sam Brooks runs through the many facets of Cher’s near-60 year career – and what makes her so special.

Look, Cher has been a pop star longer than most of us have been alive. She’s had more hits than I have had glasses of wine. She knows how to do pop right – whether it’s the gothic folk-pop of ‘Bang Bang (My Baby Shot Me Down)’, the more jangly stylings of ‘Gypsies, Tramps and Thieves’, the 80s stadium pop of ‘If I Could Turn Back Time’ or the autotune popularising ‘Believe’, Cher has been a reliable and long-lasting pop star.

Has she broken a lot of ground? Musically, maybe not – with the exception of ‘Believe’, which is the obvious and sole predecessor for Kanye West’s 808s and Heartbreak, one of the most influential albums of the last decade. But in terms of longevity, impact and consistency? She broke so much ground she brought up oil.

Not every pop star is a great singer, and not every great singer is a pop star. Our musical theatre stages are full of people who can hit a high C but don’t have two licks of charisma to rub together, and our stadiums are full of singers who use a highly creative and scientific combination of pre-recorded vocals, sound mixing and their mouth-sounds to create a passable live vocal. It is upsettingly rare that a great pop star and a great singer are actually the same person.

Cher is one of those people. Her vibrato-heavy warbly alto serves her well in being immediately recognisable – there’s a reason why she’s a popular impression choice for drag queens, and it’s because the moment she opens her mouth, you know it’s Cher. Even when it’s behind a wall of Auto-Tune, you know that’s Cher. She rolls words around in her mouth like she’s doing speech therapy in the ’40s – she mutates English and makes it Cherlish.

But she also, you know, has a very good and strong voice. She comes from an era where singers had to sing live on television all the time – you couldn’t pre-record and lip-sync your way to flashy performances. If there was singing to be done, you did it. And if you had to do choreography along with it, well that’s the cross that you as a pop star had to bear.

Take this performance of ‘Walking in Memphis’ (a total low-key banger) and ‘Just Like Jesse James’ (one of the few belters in Cher’s catalogue), and you know you’re not just watching a famous lady sing, you’re watching a proper singer slay their craft.

Little known fact: Cher won her Best Actress Oscar for heavy comedy/light drama Moonstruck in one of the strongest years the Best Actress category has ever seen. (Glenn Close in Fatal Attraction, Meryl Streep in Ironweed, Sally Kirkland in Anna, Holly Hunter in Broadcast News were her competitors, and all would have been worthy winners.)

Cher’s a great actress, you guys. Take her debut in Mike Nichols’ Silkwood, a biopic about real-life whistleblower Karen Silkwood, where Cher plays the chill best friend. It’s a warmer, fuller and much better performance than the role calls for – and one where Cher uses her distinctive face and voice to great effect. She shines from the sidelines, and never draws focus from co-star Meryl Streep’s performance (one of her best).

Then just two years later, take her role in the little-seen Mask, where she plays the caring, winningly aggravated mother of Rocky Dennis. It’s a much better performance than the boilerplate biopic asks for, it’s spiky and funny and deploys her special Cherness™ sparingly. It’s the peak of her acting career, and it’s one that any actor would be proud of.

Then there’s Burlesque, which is better than you think it is, and Cher actually gives a pretty damn great performance in it.

Cher’s social media presence is a gift, especially her Twitter. If Trump’s Twitter presence is the stream-of-consciousness devil on the world’s shoulder, then Cher’s is the white-wine drunk angel on the other side. Does she make sense? Not one bit. Does it matter? Not one bit. It’s Cher.

If you want all of her moments crystallized into one account, I give you the fan-page:

cher trying to zoom in on deer pic.twitter.com/LMR1Fe7O7x

It could be easy to sum up Cher’s success and longevity as an LGBT icon as just her being very easy to impersonate by drag queens, which she is! But why is she?

Firstly, she’s always been a little bit camp. Cher’s always been about the costumes, the glamour and the ridiculousness of performance. Cher is never going to appear in front of you in a hoodie, poorly fitting jeans and an acoustic guitar. She takes herself seriously, but never as seriously as those dudes who go in front of you like that. She knows her audience is there to have a good time, have an escape; they’re not there to watch someone with a chip on their shoulder.

This is a woman who has had to perform her entire career – the costumes, the choreography, the concepts – and she’s now at a stage where she can give you full Broadway (although in reality that’s what she’s been giving her audience for the past twenty years of farewell tours).

Secondly, she’s been incredibly open about her own difficulties around her son Chaz’s coming out, and his later transition. That takes guts, and it’s guts that the community appreciates, and supports in kind.

We love Cher, and we always will.

Cher as the woman who sang ‘I Got You Babe’

Cher as the Cher in this video

Because sometimes Cher is beyond words: