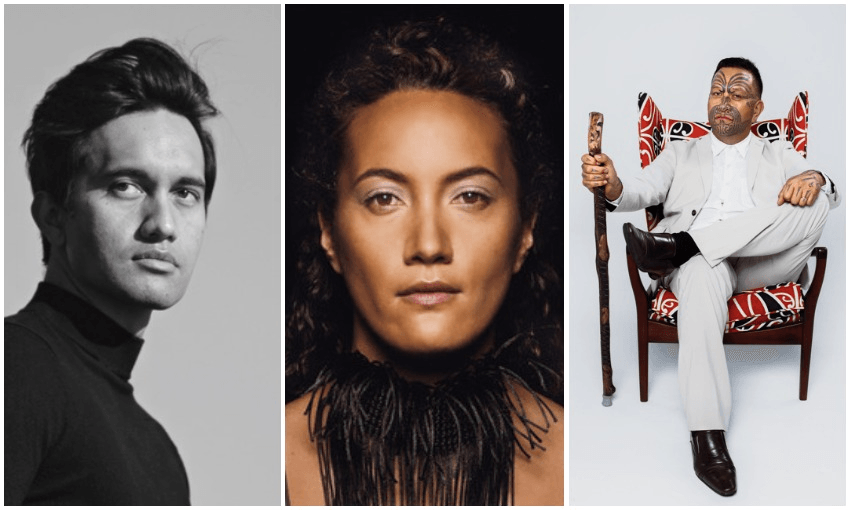 The five finalists of APRA’s Maioha Award for contemporary Māori songwriting were announced today. Miriama Aoake looks at the final five and their place in the future of te reo Māori.

This August has been a particularly busy month for Māori music; a celebration of the capabilities and dexterity of a thriving community. Alien Weaponry, a teenage thrash metal band, have been enjoying global success since claiming the 2016 SmokefreeRockquest title; they’re currently touring Germany and Spain and playing some of the largest metal festivals in the world. Electronic four-piece SoccerPractise has earned international acclaim and recently signed with Kartel Music Group, home to artists including Fatboy Slim, Peaches and Morcheeba. Rob Ruha and Ria Hall (Ngāi Te Rangi, Ngāti Ranginui) are soon to announce their joint tour, with 11 dates planned across Aotearoa and further shows to be announced in Australia. And Seth Haapu released his first song in te reo Māori this year, ‘Ngaru Hōu’, under the cloak of his latest EP, Volume III.

Māori artists are, by definition and by whakapapa, fearless navigators negotiating ever-shifting tides.

Every year, the month of August plays hau kainga to Te Marama Pūoru Waiata Māori – Māori Music Month – which aims to elevate the profile of Māori music and celebrate its successes. Today it culminated with the announcement by APRA (the Australasian Performing Rights Association) of the Maioha Award finalists; the winner will be announced at the Silver Scroll Awards ceremony in September. Celebrating composition and storytelling in te reo Māori, the Maioha Award always buzzes with talent – not because every Māori can sing (facts), but in the way it celebrates walking, talking and singing the kaupapa, fostering whanaungatanga, and sharing and growing the kete of knowledge.

Rob Ruha (Ngāti Porou, Te Whānau a Apanui) is nominated for ‘Uia’, Ria Hall for ‘Te Ahi Kai Pō’, alongside co-writers Tiki Taane and Te Ori Paki, and Seth Haapu for ‘Ngaru Hōu’. Ruha is a self-described haka-soul composer and musician, emerging from kapa haka. He has taken on roles as a consultant and performer for Mahana, and as the musical director for the te reo Māori version of Moana. His catalogue of waiata is as expansive as his trail of awards is long. With a Masters in Mātauranga Māori, and in his capacity as a mentor, Ruha operates from a wellspring of manaakitanga that conjures wehi from any audience who hears his voice. ‘Uia’, a waiata composed for Kingi Tūheitia, is concerned with the inheritance of mana from atua and our tīpuna as indivisible. Mana in ‘Uia’ is refracted through the 1766 prophecies of Te Toiroa-ikariki of Te Māhia, who foresaw the need for new modes of leadership, atua and community to negotiate the difficult terrain he tangata were to encounter. Only when mana is in unity, Ruha proposes, can Māori address the multi-faceted issues – local and global – we are presented with.

Ria Hall has progressed along a similar trajectory, emerging from the hub of Waka Huia kapa haka before changing streams to reggae in Te Whanganui-a-Tara. She has performed at the Rugby World Cup opening ceremony, lent vocals to collaborations with Stan Walker, performed backup vocals for Hollie Smith, featured as a presenter on Marae DIY, and collected innumerable awards for her growing body of work. Hall’s kaupapa is conceived from a whakatauki that permeates wider Māori society: ka mua, ka muri, walking backwards into the future. It is a recognition of whakapapa, acknowledging the need to look to our tīpuna to inform our approach to the future. ‘Te Ahi Kai Pō’, the fire burning away the darkness, is an invocation of loss in the aftermath of war. It is a waiata that speaks to the incomprehensible loss of Māori life at the battle of Te Ranga in 1864, a retaliation to Māori victory at Pukehinahina. ‘Te Ahi Kai Pō’ is a conceptual waka that transgresses time and space to ignite our shared histories.

For the last five years, Seth Haapu has been orchestrating a myriad of projects behind the scenes. Haapu has produced, composed and played with Maisey Rika, Sons of Zion and Stan Walker, worked on several film soundtracks, toured with Crowded House and Supergroove, and opened for Adam Lambert. Like Rika and Ruha, performance and composition are in his bones: Haapu’s great-grandfather Tio Paki Haapu was a bandmaster, composer and multi-instrumentalist with the Ratana Brass Band. Haapu the younger is enviably adept at the guitar and piano, and has begun to infuse his music with slices of tāonga puoro, the poi, the moana and the pahu drum. ‘Ngaru Hōu’, is a karakia of love, revelation, acceptance and embracing circumstances, reciprocating thanks for all that is given. It is galvanised by the cleansing power of the moana. Pushing himself to conceptualise music beyond the conventions of a Western methodology, Haapu has produced a salient, distinctive oeuvre that is constantly transgressing boundaries.

Waiata has always functioned as a vehicle for the intergenerational transferral of knowledge. Subject matter reflects events past and present, embracing themes of love, genealogy, derision, humour, grief, battles and death. The fundamental component is the opportunity for public expression of emotion and storytelling. Little has changed in the contemporary landscape. Māori artists have continued to fuel the fire, using composition and performance as an intimate vessel for expression. But the function of waiata has grown. As an ongoing response to the suppression and decline of te reo Māori, waiata can offer a fertile avenue for engagement and promotion. The expansion and diversification of genre invites multiple points of access for everyone, promising a mutually beneficial exchange – come for the music, learn the language, and invest in the future of the reo.