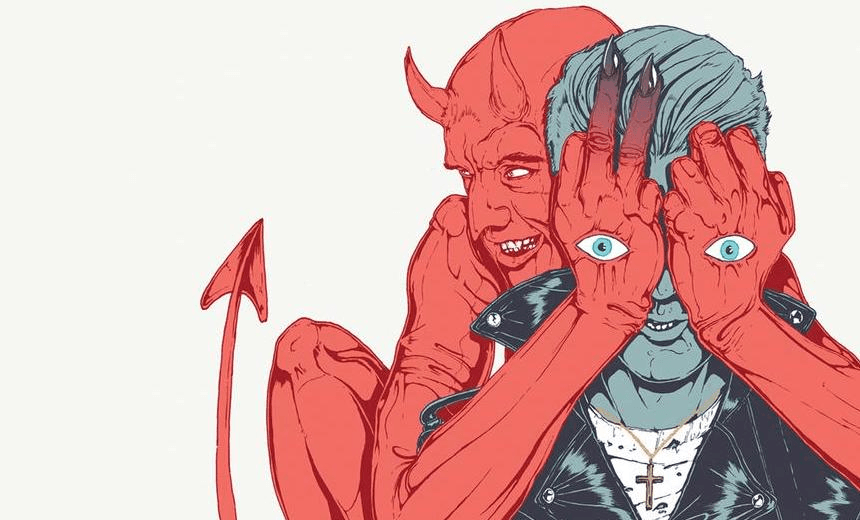 Over the course of the first fifteen years of their existence, Queens of the Stone Age at times seemed less like a band, and more like a broad banner under which Josh Homme could deliver his particular brand of moody and menacing hard rock. Homme cycled through band mates and pinned major roles within each of his records on collaborators such as Dave Grohl, Billy Gibbons and Mark Lanegan. While he was clearly always in charge, he had no problem changing up his band (sometimes during recording) or grabbing a superstar to fill a hole he felt needed filling.

This approach changes considerably on the band’s sixth album, Villains. Queens of the Stone Age keeps the same line up that toured extensively behind 2013’s …Like Clockwork, teaming faithful multi-instrumental lieutenants Troy Van Leeuwen and Dean Fertita with bassist Michael Shuman and former Mars Volta drummer Jon Theodore. The only concession Homme makes to his collaborative bent is via his enlisting of British pop maestro Mark Ronson as producer.

Such stability is almost unheard of in the Queens universe, but any concern that it may bog the band down into the kind of dull, conventional modern rock territory against which they’ve always pushed are quickly dispelled. No previous Queens album sounds like the true work of a band quite like Villains does. It’s not that Homme’s bandmates push their way into the spotlight often (though the powerful work of the rhythm section of Shuman and Theodore, in particular, often impresses), but rather that the peak which the band reached while touring behind …Like Clockwork transfers into the studio. Each song feels built from the ground up, and there’s a palpable sense of joy that can be felt through the act of playing them together.

The pre-release material characterised Villains as ‘dancey’ compared to the often introspective …Like Clockwork (a record which basically saw Homme working his way back from the brink after a near-death surgical experience, and an ensuing bout of depression), and while this description applies at various times, it doesn’t quite capture the way in which the band finds unique variations on its signature sound, all while managing to cleverly add new textures to the mix.

This is played out across the album as a whole, but can also be crystallised to individual highlights: the way in which opener ‘Feet Don’t Feel Me’ opens out from a John Carpenter-style horror movie score into a stomping piece of self-mythology worthy of John Fogerty (albeit with the swamp switched out for the desert); the manic Rocky Horror Picture Show-style backing vocals on the propulsive ‘Head Like a Haunted House’; or the way in which ‘Un-Reborn Again’ unexpectedly recycles the lyrical hook from the Georgia Satellites’ ’80s hit ‘Keep Your Hands to Yourself’, before concluding with a coda of wailing saxophone and guitar reminiscent of the glammy squall of early Roxy Music.

These touchstones are subtle, and pop up here and there throughout the album, but as always Homme finds ways to make rock n’ roll sound fresh, exalting his love of guitars (which are everywhere as usual, despite Ronson’s presence) while expanding the band’s sound further than ever with keyboards and synths. The final product is the flipside of …Like Clockwork. Whereas that album was at times chilly and reflective, this is warmer and often celebratory – the sound of a band finding endless ways to play off their strengths.

The result is not just one of the very best rock records of the year, but a statement of purpose from a band at a certain kind of peak – one where they can confidently state their case for greatness, while also pointing to where they might go yet. As such it’s not just a worthwhile listen for Queens of the Stone Age diehards, but for music fans of all kinds.