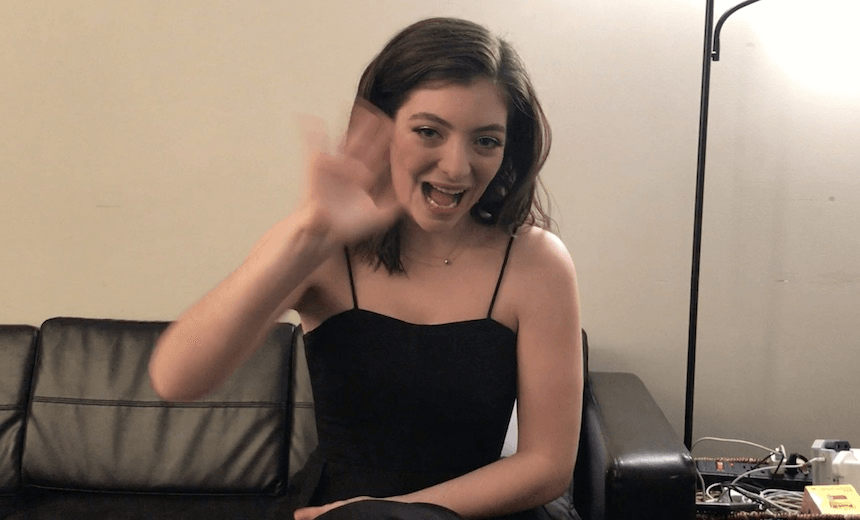 Tonight, Ella Yelich O’Connor, along with her co-writers Jack Antonoff and Joel Little, won the 2017 APRA Silver Scroll Award for Lorde’s song ‘Green Light’. Elle Hunt explains why the song is so powerful.

The 2017 Silver Scroll, the award for excellence in New Zealand songwriting, has gone to Ella Yelich O’Connor, along with her co-writers Jack Antonoff and Joel Little, for Lorde’s song ‘Green Light’.

She was unable to accept the award in person at the Dunedin Town Hall, the Melodrama World Tour having just got underway in England, but sent a prerecorded message of thanks.

“I can’t believe it,” she said of her third nomination and second win after ‘Royals’, also co-written with Joel Little, won in 2013. “I really wanted to win the Silver Scroll award, I just feel like it’s so prestigious and important. I always love and respect the songs that end up in the Silver Scrolls.”

That is not intended as a reflection of Bic Runga, Chelsea Jade, Aldous Harding or Nadia Reid, all of whom are creating more richly faceted, idiosyncratic music than New Zealand has seen in decades (or at least since Bic Runga’s last album). But Yelich-O’Connor’s talent is preternatural, it seems almost unfair to judge others against it.

There is no shame in losing to Lorde. She may have resources at her disposal now that she didn’t four years ago, embodied by Jack Antonoff, whose co-writing credit (on ‘Look What You Made Me Do’ by Taylor Swift) just spent three weeks at the top of the Billboard Hot 100. But it’s her instinct, her taste, her point of view that have always set her apart, and there is no reason to attribute that to anyone else – now, or at any point in her career.

‘Green Light’ – a song Yelich-O’Connor told the APRA judges she was “so proud of” – is evidence of this at work, not only in how it is written but that she selected it as the lead single to promote her sophomore album. ‘Perfect Places’, the second pick, or ‘Homemade Dynamite’ would have been much more radio-friendly choices. ‘Green Light’ is an strange song by comparison, woozy and crepuscular, unsettled despite its driving energy. For all its frantic forward motion, it seems to never quite find its footing, and takes more than one unexpected turn, the most crucial coming just before the one-minute mark, when the key changes from minor to major.

Of course it’s deliberate. Yelich-O’Connor told Henry Oliver for the Spinoff’s ‘Behind the Melodrama’ podcast that she began writing what would become ‘Green Light’ with Joel Little soon after the breakup that inspired much of the album – “too soon, probably, to be writing anything of significance,” she added. “You’re just in this fog of grief, you can’t construct any linear thoughts.”

Six months later, at work in earnest with Antonoff, the pre-chorus refrain (“hope they bite you…”) came back to mind, changing the course of the song.

“Jack was just hitting these chords and they were so angry, and for the first time, the song just came into this sharp focus for me,” she said. “… There was such a heat to this first verse, then the song started to take shape.

“We started to add to the collection of emotions in the song – because there are so many. It’s a real schiz bit of pop music.”

It is revealing to compare ‘Green Light’ to Chromeo’s remix, which smooths out the pace, tones down the drama, takes those corners slower. In the hands of the Canadian electrofunk duo, the song becomes a more conventional proposition, washed with New Wave indifference and irony – not so much waiting for that green light, wanting it, as keeping an eye out for it.

As rendered by Yelich-O’Connor, her eagerness to move on from a past relationship is urgent, almost desperate – and all the moreso for the permission to do so having been thus far withheld. When fans interpreted the song as a reference to The Great Gatsby, she gently corrected them on Twitter: it was “more like standard traffic light type meaning of green light :-)”.

Frozen on orange, not yet given the go-ahead but secure in the knowledge it will come, ‘Green Light’ balances desire and uncertainty on an unwieldy axis. On ‘Behind the Melodrama’, Yelich-O’Connor likened it to a race: “The next part slaps the hand of the last part and continues its section of the relay,” she said. “There’s an element of the baton changing hands. It’s like, ‘hold on, I got this, I got this – I’m gonna run’.”

But, as she told Zane Lowe at the time of its release in March, ‘Green Light’ had not come easily: “It took us so long to kind of craft what it was”. It fell into place when she made the connection with “that drunk girl at the party dancing around crying about her ex-boyfriend, who everyone thinks is a mess”: “That’s her tonight, and tomorrow she starts to rebuild.”

The video interprets that literally, with Yelich-O’Connor at a nightclub by herself, then starting out on her journey home, inexplicably joyful. The clip sparked a keen sense of recognition in me of the nights – too many to count – I’ve drunkenly walked home with my headphones on, simultaneously tearful over some boy and compelled to dance by just how good the music sounded in my ears.

Often in the past six months, in fact, it’s been ‘Green Light’ I’ve put on single-song repeat. It revels in the ecstasy that comes with misery, secure in the knowledge that things can only get better and it will only take time. We’ve all felt it, at some point or another. But Lorde found brand new sounds in it.