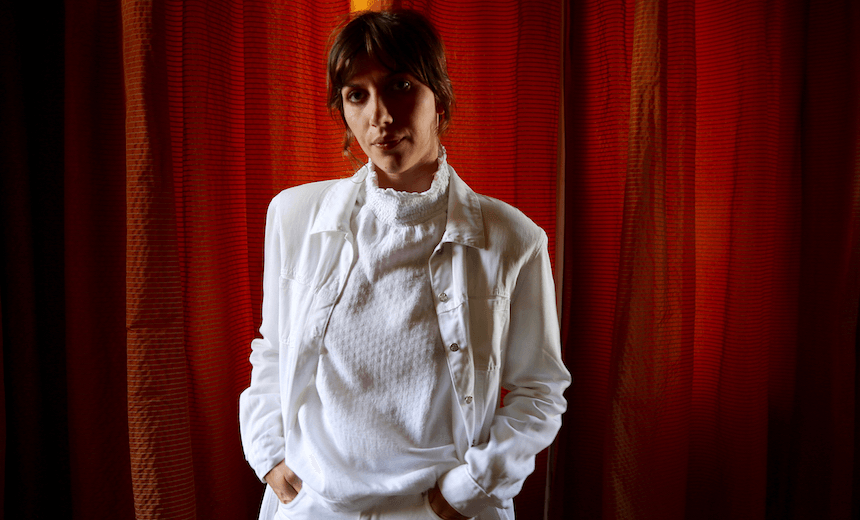 When I first heard Aldous Harding’s ‘Horizon’, I was stopped cold. I’d listened to her album Aldous Harding a few times on its release but hadn’t kept up with her output (the primary medium of which seemed to be YouTube videos shot in the lounges and bathrooms of boho apartments in the midst of her hectic EU & US tour schedule). ‘Horizon’ sounded like it came from a completely different world than Aldous Harding. What was once introverted and internal was now expressionistic and expansive. What happened to her? What was she doing? What was next?

‘Imagining My Man’ partially answers that question, bridging Harding’s new theatricality and expanded sonic palette (both vocal and instrumental) to her previous work’s folk traditionalism. Those that missed her balladeering and dexterous finger-picking will find a comfort here that ‘Horizon’ denied absolutely. The piano and drums, the choir and the ’70s-Eno/Cale sax are all less a shock of the new than ‘Horizon’’s dramatic starkness.

These differences and similarities are on display in the songs’ videos (both directed by Charlotte Evans and produced by Evie Mackay), which can be read as two of a series. In both, Harding engages the camera, only sometimes singing along. In both, Harding is dressed in all black, accompanied only by another woman in white (her mother in ‘Horizon’, her manager in ‘Imagining’). In both, she carries the scene in her physicality like a skilled actor but undercuts any sense of self-seriousness with a subtle grin or a wide smile. But ‘Horizon’ is open, exterior, and rural – shot in a sunny tree-lined field. ‘Imagining’ is closed, interior, and urban – shot inside a car in gray downtown Auckland. ‘Horizon’ is mythic, timeless. ‘Imagining’ is familiar, contemporary. In ‘Horizon’, Harding is a waterlogged warrior, an avant-assassin. In ‘Imagining’ she’s jewelled, glamourous. Where – the video invites you to ask – is she going?

Like everyone else stopped by these two songs, I’m waiting to find out.

To my ear, Aldous Harding belongs to the Angel Olsen/Sharon Van Etten school of singer-songwriters, set apart by her low, almost warbling voice. ‘Imagining My Man’ is about letting go of expectations of romantic love, but musically is characterised by restraint, with small details and variances that are all more the lovely for being sparingly scattered. The “hey!” at about 1:39, for example – a less self-possessed songwriter would have used this after every staccato juncture, but Harding builds to that in the second chorus just before the four-minute mark, coinciding with the entry of the drums. After a nearly six-minute slow burn, the end, when it comes, is a little anticlimactic – I imagine Olsen might have opted for a big finish. Perhaps Harding could have taken the same three chords somewhere new, but the journey is very lovely.

I’m still not quite sure what to think of the swell of acclaimed indie-folk singer-songwriters that have taken over RNZ et al in a bloodless coup (a Kiwi Animal reappraisal would be nice, though), but at least they’re sonically a lot more interesting than they need to be. ‘Imagining My Man’ sees Aldous Harding poised somewhere Nadia Reid’s immersive Tim Buckley-isms and i.e. crazy’s gothic/industrial malaise. The not-quite-Art-of-Noise “hey!”s and pastoral horns leaven the new song’s sound from the ‘ominous/buzzy’ setting of ‘Horizon’.

Vocally, her marble-mouthed huskiness is still striking in a New Zealand context, as the CocoRosie/Joanna Newsom/Devendra Banhart mouthing-along-to-old-78s style never really took off here. To be fair, there are local precursors in the likes of Skeptics’ David D’ath, but his vocal eccentricities were more along the lines of Kate Bush circa The Dreaming character studies, whereas Harding gives the impression of singing from the big ‘I’.

The second song we’ve heard off Aldous Harding’s sophomore album (which apparently will be called Party, with no discernible sense of irony), ‘Imagining My Man’ starts as a crawling, intimate, piano and finger-picked acoustic number – the kind of song that definitely could have appeared on Harding’s eponymous debut – but about a-minute-and-a-half in things open up a little with a neat backing vocal effect (is that a child?) and the addition of percussion and electric guitar as Harding essays the expectations of love vs. the reality. It’s powerful, though a six-minute down-tempo is not a usual choice for a single. The influence of PJ Harvey collaborator John Parish’s production is quite obvious here (particularly in the coda where brass is added to proceedings) and it seems harding might be on the cusp of delivering an album as stark and beautiful as something from Harvey’s White Chalk era. In other words, it’s excellent. But if you’re feeling vulnerable today maybe save it for later.

2017 Aldous bangs SO hard. It’s a beautiful song with a beautiful video and I’m 100% in a trance watching it play out. A real slow burner, much like the recently released ‘Horizon’ and unlike most of the songs on her first album. There’s also something quite wonderful about the state of reflection the song is set in, it seems like that point of acceptance you eventually reach where you just don’t give a fuck anymore and I’m so here for it. That finger picking is hella on point too. So yeah, it’s good. Real good.