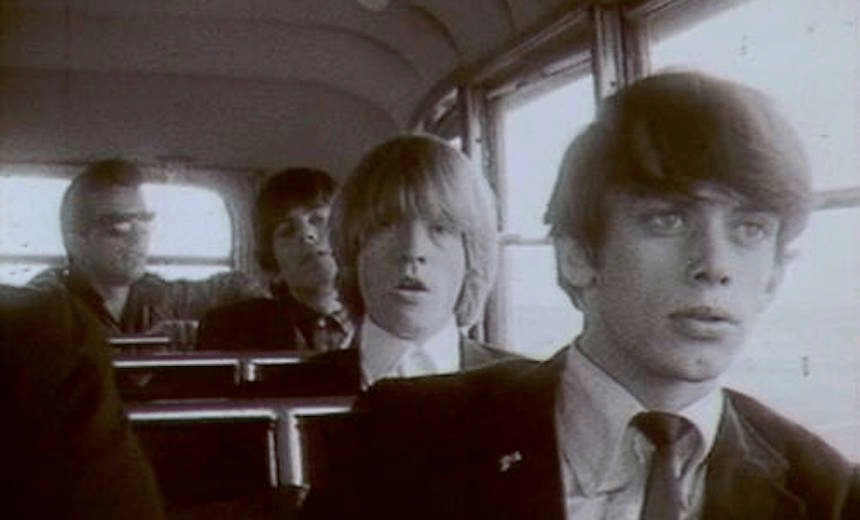 By Murray Cammick
Guest writer
Made possible by

Murray Cammick – co-founder of Rip It Up and founder of Southside Records and Wildside Records – remembers Ray Columbus, the New Zealand mod icon who died yesterday.

Last time I saw Ray Columbus on stage was at the Wild Things Spectacular at the Monte Cristo Room in Auckland, 2007. The Breakaways, The Pleazers and the Underdogs were reunited and Ray was performing with former-Invaders Billy Karaitiana and Dave Russell and a few younger musicians. Ray was the guy in the coat with the cap, in the sweaty club, looking dapper, every inch the Mod.

In an interview with Real Groove in 2001, Ray enthused about the style of their early manager who took them to Auckland December 1962: “Johnny Johnson was the coolest guy. He was a Jive champion, a jazz-bohemian, not a beatnik. He was real slick, wore beautiful sharkskin suits – a real style guy. He was fantastic!” Columbus liked Johnson’s business style too. “He wasn’t arrogant, he was just sharp.”

The Invaders had played the Christchurch USA military base’s “Enlisted Men’s Club” and had been exposed to US R&B on the jukebox. “We’d hear stuff like James Brown – these black guys would get on the floor and start doing dances like the mashed potato,” said Columbus. “Being an ex-tap dancer I was able to learn the dances.”

In the early 1960s, two Christchurch bands arrived in Auckland and showed the locals how it was done: Max Merritt & His Meteors and Ray Columbus and the Invaders. The Invaders were still part Shadows but embracing R&B – they played with power, style and good gear, and had every promoter wanting to sign them up for a return visit. They conquered Auckland in 1963, Sydney in 1964, again showing the locals how it was done. It was the year of The Beatles and “Yeah! Yeah!” – so they added “Yeah! Yeah!” to ‘She’s A Mod’ and it was a No.1 in Australia first, then back home.

I’ve said the two Christchurch bands showed the locals in Auckland and Sydney how it was done. Some folks will say “Oh! Yeah?” My answer: “Yeah! Yeah!”

Both bands toured with the Rolling Stones in Australia and New Zealand – The Invaders in 1965 and The Meteors in 1966. In 1965, the Stones had one original song in their published sets, in 1966 they had four originals. It was early days for everyone. The extensive January 22 to Feb 16, 1965 tour had two shows most nights, sometimes three. There was a mutual respect between the Stones and the two New Zealand bands. Billy Karaitiana played bass in The Invaders in 1965 and in The Meteors in 1966. On the second tour, Bill Wyman gave Karaitiana the first Vox Teardrop bass ever built. Columbus had wanted to take The Invaders to the US but work visas were denied, so his rhythm section left to join The Meteors.

In 1977, RipItUp magazine was new punk / new wave obsessed, country music was evil and we met Ray Columbus at a press reception for his new single ‘I Wanna Be The Singer’. The single was not for our demographic but it was cool to meet the sixties legend. He was aware of our fledgling enterprise and genuinely enthusiastic about the music magazine’s potential. We were fresh on the music biz boat and he was an elder statesman by then – he was thirty-something! – and did things older people do; he’d joined the Arts Council and they’d made an urgent grant to bailout Split Enz. And he was host of the cowboy show That’s Country!?

In 1981, CBS issued a Ray Columbus and The Invaders Anthology and we got hip to the cool tracks that weren’t thrashed on radio. (This year, Ray’s solo work and recordings with The Invaders have been compiled and released on the CD Now You Shake by the UK reissue label RPM.)

In November 1985, RipItUp magazine hit issue 100. We needed to have a party and Phil Warren and the Six Month Club crew gave us the venue and great musicians made our night. Ray offered to perform and we gladly added him to the lineup. He showed up at the rehearsal with charts for ‘She’s A Mod’. I don’t think bandleader Dave Dobbyn thought charts were necessary. Ray did the old showbiz trick of not being side of stage for your call, so Dave had to ask, “Where’s Ray?” He did a show-stealing entrance from the audience and stole the show with ‘She’s A Mod’.

When Ray Columbus did the interview with Real Groove in 2001, he was more passionate about music than ever. I was trying to talk about the past and he was about to invade the USA. He was managing young rockers Zed and their debut album Silencer was en route to 60,000 sales. “World Zedification” was the plan and Ray was the man. Then the USA company wanted an American manager and …

The Ray Columbus autobiography The Modfather was published in 2011. A review reader objected to the book title, pointing out that Paul Weller was The Modfather. Weller was a pre-schooler when mod got started. Ray’s generation were the Modfathers.

My neighbour went to the Volume exhibition at Auckland Museum on Sunday and the three- and seven-year-olds in tow loved the Amusement Arcade vibe and enjoyed being part of the C’Mon show and they drove home in the car singing, “She’s a mod, she’s a mod, Yeah! Yeah! …”