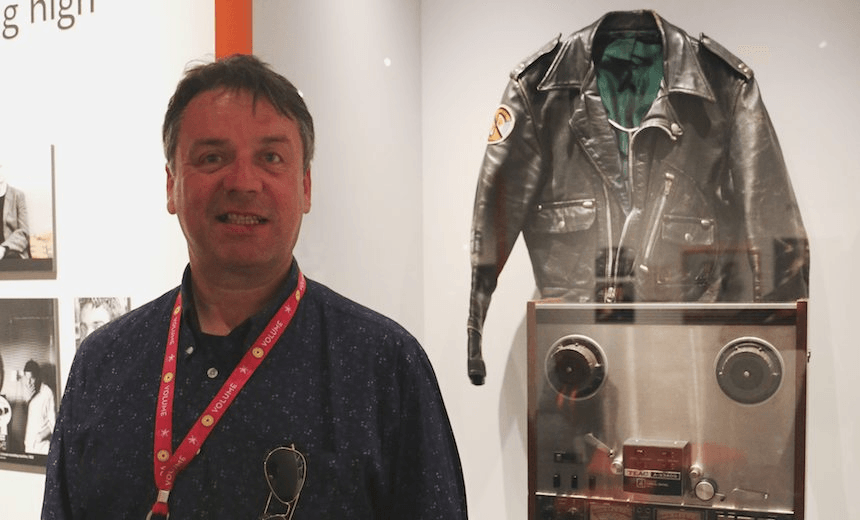 MARTIN PHILLIPPS WITH *THE* LEATHER JACKET

The Chills visit Volume: ‘I can’t sit back and enjoy a lot of the early Flying Nun stuff’

By Graham Reid
Guest writer
Made possible by

MARTIN PHILLIPPS WITH *THE* LEATHER JACKET

Graham Reid takes The Chills on a tour of Volume: Making Music in Aotearoa exhibition at the Auckland Museum.

A little more than 24 hours before they take the stage at Laneway under a blazing blue sky, five very weary Chills arrive at the Auckland War Memorial Museum. They’ve been up since 5am and are at the tail end of a lengthy tour which has taken in Europe and the US last year, and the South Island these past few days, in promotion of their 2015 album Silver Bullets.

The album has garnered highly favourable reviews at home and abroad. Chills’ frontman Martin Phillipps, who launched the first Chills line-up some thirtysomething years ago, has every reason to feel pleased. The band has been stable for many years now, the relationship with Britain’s Fire Records is assured, the new songs are strong… but has the album sold as much as the critical reception might suggest?

“I don’t think anything sells as you want it to,” he laughs. “But, critically, in terms of establishing this band now, it couldn’t have done better. It has been perfect. We are facing a dilemma that in Europe with the fast turnover of things it’s history already, whereas in America we are looking to get back in about October and we’ll still be able to tour Silver Bullets. So it’s done everything we’ve hoped, and now we are working towards a next album.”

Before then, however, will be a single for Record Store Day: a new song ‘Rocket Science’ and, on the B-side, ‘Lost in Space’: “a song I wrote in ’81 but we never recorded”.

So plenty in the present and future, but while in Auckland they’ve come to the museum to catch something of the past: the exhibition Volume: Making Music in Aotearoa – a six-decade overview of photos, artifacts, artwork, equipment, films and hands-on activities. The exhibits include the iconic leather jacket which Phillipps immortalised in song and and generously loaned to the exhibition.

“I didn’t realise it would be competing with another leather jacket,” he jokes, referring to one that Peter Urlich wore in Th’Dudes.

While inside looking at that jacket, bequeathed to Phillipps by the band’s former drummer Martyn Bull, who died in 1983, bassist James Dickson overhears a man telling his wife about it. “I wondered whether I should tell them that Martin was standing right behind them.”

Such is the passage of time and history, that the musical heroes of yesteryear can either go unnoticed or their contributions unheralded.

Ask the various Chills what they were surprised about in Volume and the answers are interesting. Dickson was taken by the artists of the ’50s and ’60s, “especially the Underdogs performing in their underwear, and Peter Posa’s album cover with one with the lady leaning over [White Rabbit, which features Posa and a woman in a Playboy bunny outfit]. That was spectacular. I was impressed. He looks bemused on the cover.”

Drummer Todd Knudson is taken by the fact some of the musicians included were “so young, like Shona Laing. I remember her from the ‘80s and had no idea she had started so early in the ‘70s… and also that there were so many psychedelic bands in the ‘60s.”

Violinist/pianist Erica Scally is impressed by the Split Enz stage costumes made by the band’s Noel Crombie (“He used to surprise the band with them,” notes Phillipps. “A week before a tour he’d show them what he’d made for them.”). Keyboard player Oli Wilson also refers the ‘50s and early-‘60s section, “because it was a bit more otherworldly. The more contemporary stuff was more relatable but that other stuff was more a step back.”

“Those milkbar cowboys in the ‘50s looked quite heavy,” says Phillipps. “I’d expected a tamed-down New Zealand version of that. But no! I’d cross the street.”

But of course the real question is, what does Phillipps think when he sees the exhibits from the ’80s, especially the Flying Nun material, which includes fellow travellers like Chris Knox, the Clean and others?

“I guess it’s getting so long ago now that I’m almost looking at it like other people. The same with New Zealand music from that era, I very seldom listen to it because I can’t separate the music from the stories and the people I know.

“I can’t sit back and enjoy a lot of the early Flying Nun stuff, it’s distracting as opposed to exciting or soothing or whatever. That’s what’s it’s like… looking at all these people who died or stopped making music.

“But it’s also nice to look back and see that it’s all part of a historical legacy and that it’s of interest to people. We didn’t see that coming!”

On the way through, it has been noticeable that as practicing musicians they have stopped to look carefully at guitars, amps (“I had one of those,” says Phillipps) and foot pedals in a way that’s foreign to civilians who don’t make music.

“I’d hoped there’d be more of New Zealand-made instruments and equipment,” Phillipps says, “but it’s good there’s a selection to show people that it did happen, and that they were so in demand, people here started making their own equipment.”

There’s some small irony that the Chills sit and chat unnoticed by people streaming past, many of whom will stop at that leather jacket, the photos of Phillipps, and the album covers in the record store mock-up and let the memories come back. But the Chills are still a here-and-now band, one which has reached a late-career peak that few would have expected only five years ago.

Tours, albums, shows… it just goes on. But, as Phillipps notes, not for everyone. Some gave up or died, and some musical threads haven’t made it into the exhibition. “I hadn’t thought about it before, but there’s a whole underground/King Loser thing going back. It’s not so much post-punk but more going back to rock’n’roll… there were a lot of bands of that ilk, people like Shaft.”

“[Volume] struck me as a museum piece about the recording industry and not really the music industry, says Oli Wilson, who is also an academic with a keen interest in the culture of how music is presented in museums. “It doesn’t really reflect the entire ecosystem of music culture in New Zealand. It’s a recording-focused thing and tells the story about those who had access and participated in the recording part of our industry.

“It has a bit about the live stuff, but my own experience is about seeing the music live. There wasn’t much about venues that were seminal, and venues are where those communities came together to see the bands.

“That’s not criticism, just a comment. There are tangible material objects, but the real story is in the communities that were producing those objects.”

And within 24 hours, Dunedin’s long-distance runners The Chills will be again connecting with their community, this time under a burning blue Auckland sky.