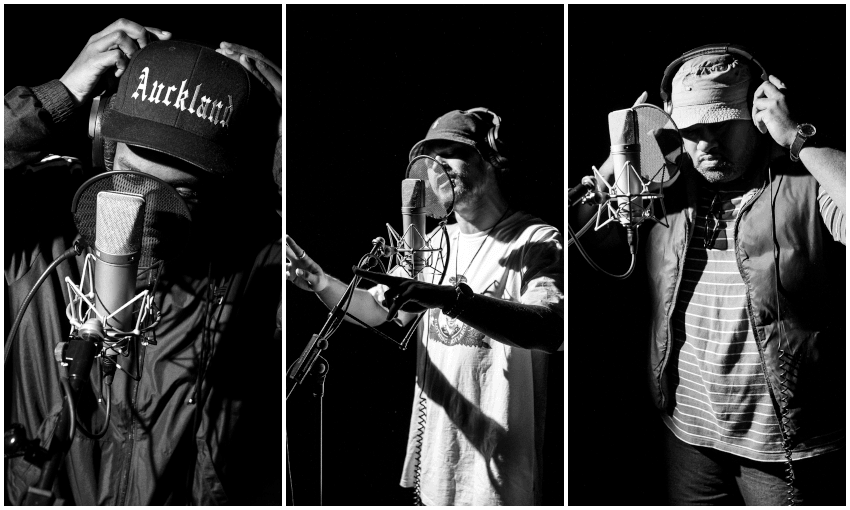 The Red Bull 64 Bars series has become a hotbed of local hip-hop. Hussein Moses asked the artists who had stepped up to the mic to break down their favourite one-liners from a series that’s full of them.

Now seven seasons deep, and on the eve of the next group of young talent stepping up to the mic; rap series Red Bull 64 Bars has established itself as the go-to spot for the best underground hip-hop talent in the country. Co-created by Red Bull and local rap icon David Dallas, and recorded at the brand’s Auckland studio, the no-frills concept of the series acts as the ultimate test for up-and-coming lyricists: can you rap one verse, non-stop, for 64 straight bars?

Raw rhyming is at the heart of the series. The verses and videos it’s produced capture the competitiveness and bravado that’s essential to rap culture, as well as the high-pressure moments of artists being put on the spot in front of cameras – often for the very first time.

The minimalist, back-to-basics approach was inspired by Sway’s ‘Five Fingers of Death’ challenge and Charlie Sloth’s legendary web series ‘Fire In The Booth’. Whether you’re a rap purist, or just appreciate the craft, each video from the series has become a must-watch for fans of New Zealand hip-hop, with local MC’s making their case for supremacy through unforgettable verses and knockout one-liners.

Acts that now sit at the heart of New Zealand’s hip hop culture like Melodownz, Jane Deezy, Church and SWIDT’s INF laid it down like a rite of passage in the Red Bull booth when they were coming up. With a new season on the way, we rounded up some of the project’s past participants and asked them to reflect on some of their favourite bars from seasons past.

“This whole 64 just has an ease to it and when he delivers that bar, that doesn’t change yet the feeling still manages to. Also that’s a whole lotta African contained in just that one line that makes me personally wanna snap my fingers in Z formation while yellin “tell em again!” Anytime a minority group, any and all of them, can be represented like this is special; not just for us but especially for the generation that got next.” – Jane Deezy

“For me, Diggy’s 64 is up there with my top 3 next to Dirty and Church. I like how that bar from Diggy caught me off like I had to process that line before I got it and when it hit I was like ‘yooooo that’s dope’. Mans came raw as fuck throughout his whole 64 but that was a line that stood out for me, and how he was talking about the junkies and crackheads and said ‘eyes wide open like anime characters’ – that shit bars for real. Only Diggy could construct a bar like that.” – Melodownz

“It’s hard to pick a bar because Manu is fire all the way, but I can relate to this hard. As a kid I’ve actually gone for a ride to pick somebody up, way up North, because the police were after em’. Imagine being woken up at 11pm by a phone call from someone and then told to get in the van cos you’re going on a spontaneous trip up North to get somebody. As a child you don’t know WTF is going on but you eventually realise when you put the pieces together.” – INF (SWIDT)

“Dirty’s 64 is the holy grail to me. When I was writing mine, my measuring stick was always his. What makes his so cool to me is his authenticity: the accent, the subject matter, it’s all relatable in some way. This lyric is just one of the highlights because everyone has been on a road trip that stopped in Taupo. But the way it’s flipped here is genius. He’s not talking about “doing the dash” or anything Americanised. It’s straightforward. Dirty’s going down the line. It’s perfect in its simplicity because it’s such a vivid picture in my head.” – Church Leon (Church & AP)

You must appreciate the life that you’re blessed with” – Rizván

“The thing about Rizzy is that he’s those rare Aesops that can’t jump on a beat without making it count. Every verse throughout his entire catalogue has depth and insight, whether it’s him telling us about his upbringing in Tonga or the typical night of a doorman who stays ‘dipped out in black’, he always pulls the audience into his own life. That’s what I admire about him, open and honest. Love the keint.” – Diggy Dupe

“Tryna infiltrate my brain? I was raised with a head of stone” – Rizván

“The thing about that line I love so much is what came before it. This bar comes at the tail end of his verse where he talks about all these things that come against him, whether it be the struggles he faced growing up or the struggles he’s faced more recently. To go from those to that bar is admirable to say the least. I love cunts with a strong mental and try my best to keep mine tough.” – Dharmarat

“If you are what you eat, you’re embedded with freakish horsepower / Siana, it’s a Tongan delicacy” – Rizván

“Rizvan’s pride in his culture and family is inspirational. As he rhymed, I felt like a mosquito on the wall witnessing a tropical island childhood of humble beginnings. Having nothing, yet having everything. After hearing his 64 bars I wanted to take a DNA test to see if I was AT LEAST .001% Tongan. His 64 is unparalleled. Masterpiece, Rizzy.” – DIRTY (ENO x DIRTY)

This content was created in paid partnership with Red Bull. Learn more about our partnerships here.