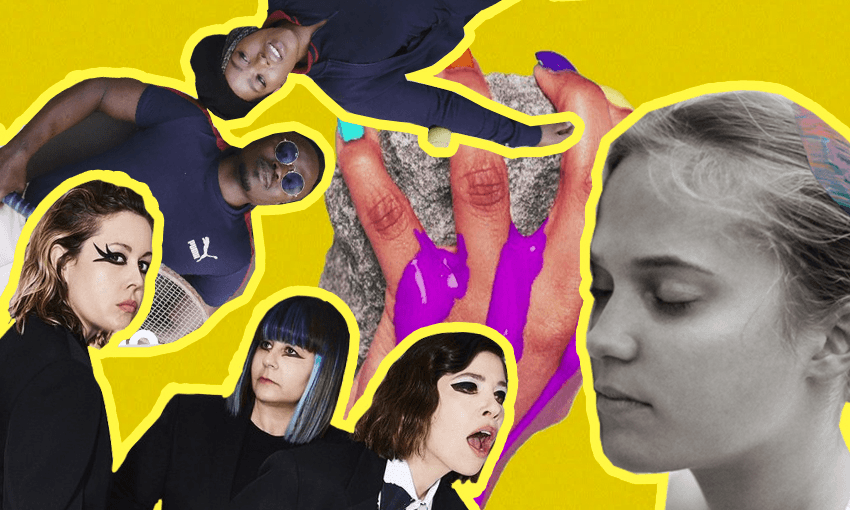 The Spinoff Music’s songs of the month: May 2019

What does a Sleater Kinney collaboration with St Vincent, an epic mashup, and the return of bro-music’s moodiest navel-gazers have in common? They’re all in The Spinoff Music’s best songs of May 2019.

‘Hurry on Home’ by Sleater Kinney

2019, and the only thing that can save the world is a Sleater-Kinney song produced by St. Vincent. I was a massive fan of their 2015 album No Cities to Love, where SK carried their ’90s riot-grrrl aesthetic into a lusher, rounder sound, but this feels leaner, meaner and more urgent. It’s like glam-garage rock. When Brownstein growls ‘unfuckable, unlovable, unlistenable, unwatchable’ it feels less like labels of shame, and more like labels of pride. / Sam Brooks

Greek indie-pop artist Stella-with-a-sigma goes disco on her first single for Canadian label Arbutus (early Grimes, Braids et al). It’s trebly nirvana as ‘Samba”s supple bass is frosted with the sort of ersatz calypso presets last deployed by Deep Cuts-era The Knife, Theremin, and lotus-eating Balearic guitar. Maybe it’s the song’s queer-night-out-in-Athens music video influencing me, but she has a touch of a Hellenic Robyn, flickers of dread bubbling up on the dancefloor: “Do I know you? / Have we met before? / Do you realize that they own you? / Have you finally had enough?” / Stevie Kaye

From the abrasive monarchy-baiting of its title track to the spare and confronting personal history of closer ‘Northhampton’s Child’, the entirety of Slowthai’s debut long-player Nothing Great About Britain is red-eyed, teeth-bared, capital-case Appointment Listening. If you’re looking for a relatively digestible intro before you lock the doors and draw the curtains, single ‘Inglorious’ is an ideal primer for the bad-acid sonics and knife-sharp wordplay of the UK rap scene’s most shockingly bright young thing. A brief and often darkly hilarious feature from the inimitable Skepta is the kind of co-sign a young British rapper dreams of: a veritable legend still basically in his prime, letting the world know who’s got next. / Matthew McAuley

‘Oblivions’ by The National

Until their latest album, I Am Easy To Find, it felt like The National were running in the same circle with slowly diminishing returns. The solution turned out to be simple: women. Carin Besser, Matt Berringer’s wife, has been contributing lyrics to the band for a few albums now, but for the first time, the band is including women on vocals, turning their somewhat navel-gazing monologues into delicate, conversational duets. I Am Easy To Find includes Gail-Ann Dorsey’s massive contralto, Lisa Hannigan’s wilting soprano, This Is The Kit’s Kate Stable’s fizzy whisper and Sharon Van Etten’s ever-familiar croon.

My favourite track on the album is ‘Oblivions’, which also happens to be Mina Tindle’s only feature. It feels like the culmination of the album’s thesis – a group of songs that discuss love not at the start nor at the end, but love right in the middle of it, a marriage lived and loved through. Berninger’s booming deep voice is always going to be the selling point of this band, but the heart of the album rests in the way Tindle pleads, “Oh my mind is made up of nothing now”. It’s a statement from someone who has decided that love is enough, trust is enough, and while the fear is still there, those still things will carry them through. / SB

It’s a bittersweet reality that life in the Southern Hemisphere means you hear summer jams while being lashed by winter, though for once it’s from someone in the same boat – I’d missed the January release of Congo-via-Durban charmer Tresor’s ‘Sondela’ until the video popped up last month. There’s the zero-g falsetto buoyancy of Sun-El Musician & Samthing Soweto’s ‘Akanamali’, all hypnotic synth pads, ornamental brass trimmings and effervescent vocal runs – though mostly in Xhosa, the lone English refrain “I just wanted you to know my smile belongs to you” is enough to melt hearts like butter. Shades of Wayne Wonder’s immortal ‘No Letting Go’, which isn’t a claim I make lightly. / SK

If Sleater-Kinney can’t save us in 2019, maybe a mash-up between a 1981 Human League song and a 2001 soul song can? This song actually premiered by accident on Annie Mac’s show a few months ago, and it’s taken until now to work its way through to streaming services. And man, whatever happened to the mash-up? They were amazing. KDA has apparently had this in his back-pocket for 13 years now, and god knows what else the man has up his sleeve, but if it’s anything like this, he needs to release it. More or less any song could be improved by Angie Stone’s vocals, but lining up her ‘I Wish I Didn’t Miss You’ vocal with The Human League’s anthem ‘The Sound of the Crowd’ makes for an instant club classic – bottle service style. / SB

‘Thinking Bout Me’ by Cecily

The sound of this thing is huge. Cecily’s voice has a Sigrid-esque lilt to it, full of croaks and quirks, and while this song starts off like a distorted version of Julia Michaels’ ‘Issues’, it blows up into what feels like a celebration of wallowing. There’s a paradoxical high that you can get when you’re trapped in self-destructive internal monologues (“Guess I’m a hypocrite/A stupid bitch/Dumb, dramatic, stupid bitch”) and ‘Thinking Bout Me’ captures that rush with ever-growing effervescent choruses, and a bridge that somehow, beautifully, samples ‘Twinkle Twinkle Little Star’. Keep an eye on Cecily, if there’s even one more song like this in her future, she’ll be huge. / SB

‘Give Me Space’ by Amamelia feat. Junny

Amamelia – Amelia Berry of dearly departed Auckland twee-disco outfit Polyester – explores the outer reaches of the rhythmic solar system on new track ‘Give Me Space’, whose icy breakbeats are worlds away from her former band’s French Touch flirtations. Maybe it’s the cosmological concerns, but I’m reminded both of the icy, ludic fussiness of Spring Heel Jack circa ‘Where Do You Fit In?’ and the flat affect and vocal science of Isolation Loops-era Bachelorette. Who knows, maybe it’s time to break the seal on the vault containing Fiona McDonald’s A Different Hunger. / SK

This one dropped no more than 10 hours ago as I write, so forgive the brevity, but I’m already eight rewinds deep and have the hook, the beat and roughly 60% of the lyrics indelibly burnt into the part of my cortex that’s designated “STRICTLY 4 HEATERS”. Church and AP’s vertigo-inducing rise sees them hitting London next week, and it’s hard to imagine a better set of representatives for the artistic output of our blessed isles. God Defend Niu Sila. / MM

Another collaboration between Wellington’s Hybrid Rose and Auckland’s Fanfickk, ‘Solitude’ splits the difference between ballad and anthem – an introverted inversion of the kitchen-sink mise en scène of the Specials’ ‘Friday Night, Saturday Morning’, with the deadpan wit of Princess Chelsea circa The Great Cybernetic Depression. Glowing, Duplo synths and liberal use of pitch-bend (and I’m a sucker for vocals returning in the bridge via a vocoder) give the track more warmth than you’d expect, with a brightness that’s equal parts chiptunes and some sort of molecular gastronomy-esque deconstruction of hi-NRG. / SK

Miss June have been the next big thing in NZ’s underground for what feels like an infinitely long time, but despite a handful of big hooks and an undeniably lethal live show, their recorded output has always felt to me like a slight underdelivery on their considerable potential. With their first release on discerning American indie French Kiss Records, the double-A-side ‘Best Girl’/’Twitch’, they’ve finally caught up to the hype. Sounding something like 1992 Sonic Youth playing a 1995 Smashing Pumpkins song, ‘Best Girl’ ticks all the Miss June boxes: squally but melodic guitars; a gut-punch rhythm section; and a lead vocal that’s as terrifying as it is compelling. Kick out the windows in your mum’s VW Golf and lay down some doughies in your nearest rugby field, because rock music just officially got fun again. / MM

You can listen to (most of these) songs right on this Spotify playlist right here: