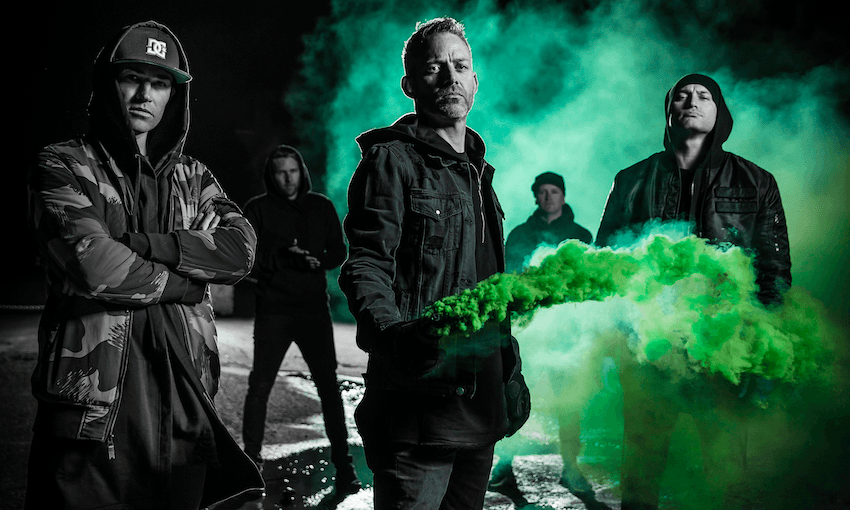 Blindspott, the only band in history to have the same album debut at number one twice.

Blindspott, the only band in history to have the same album debut at number one twice.

Content with playing rock covers out of west Auckland garages, longtime friends Damian Alexander, Marcus Powell and Shelton Woolright never thought it was within their reach to write and release an album of their own music. But five years after they got together in 1997, sharing originals with their growing fan base became a challenge.

“It’s impossible to think we ever knew what we were doing or what we were creating,” drummer Shelton Woolright told The Spinoff.

If they had low expectations for the recording in 2002, they could never have anticipated its longevity. In the last week of New Zealand Music Month for 2020, Blindspott’s self-titled debut has made history. It stands at the number one spot, again, on the Official New Zealand Music Chart, after it was rereleased on vinyl earlier this month – 18 years since its debut.

A couple of decades earlier, with the likes of Faith No More, Rage Against The Machine and Cypress Hill ringing in their ears, the kids from West Auckland had decided to give it a shot.

“We all had similar tastes in music so recording was easy,” Powell said.

In its first week of release, Blindspott’s debut album went platinum. Tracks like ‘Nil by Mouth’ and ‘Phlex’ became anthems and the group grabbed the attention of an audience outside of New Zealand. A movement was kickstarted. The band didn’t try to understand this huge feat, unattained by so many other New Zealand artists – instead gunning towards international glory without thinking twice.

“It all happened so fast,” Woolright said. The first song they ever wrote together, ‘Nil by Mouth’, launched the band and Blindspott was signed to EMI. The group trialled the track first by playing it to friends. Watching the words being echoed back by their peers, they started to see their own potential.

Once the song became a hit, writing together as a band became easier.

“I remember sitting in my room coming up with ‘Room To Breathe‘ with the boys and recording on an old Aiwa,” Powell, the group’s guitarist and co-vocalist, said. “I learned that the group is the sound. Not any one person.  And that’s what makes music so special to me. The collaboration and the mix of ideas.”

The group was already recording at Auckland’s York Street Studios when Powell put together the main riff of ‘Ilah‘. In his mind, the song feels like the most natural and collaborative track on the album. “All the songs hold a story for me – I mean, my own interpretation. Every single guitar part I wrote reminds me of the experiences I had around them prior to showing the band,” he said. “It signifies a time when the only thing we were concerned about was how music felt.”

‘Phlex‘ reached number two on the charts before being certified gold, digging deep into the hearts of fans.

They went on to release their second album, End The Silence, in 2006, which also debuted at No 1. As it stands, Blindspott is the only New Zealand band to have both their first and second albums debut at No 1. Success came hard and fast for the good-time-loving westies who had started out with only the purest of intentions.

At one showcase in Asia hosting 80,000 people, the group were helicoptered into the backstage area. From the outside, it appeared Blindspott had more than they could have ever hoped. But an eventual fall-out halted the group at the end of 2007, with cracks appearing a year prior when distractions delayed the release of End The Silence.

Woolright still harbours regrets over how the situation was handled and how their private angst played out in the public eye. In hindsight, he reckons all that really needed to happen was for them to get into a room and have a “bloody good scrap” like brothers. Alexander says the focus on “world domination” and the “next goal” made it hard to see how good they had it.

“I loved what we were doing but it was a trait I think we had as a band to not settle and not take no for an answer, which ultimately means you didn’t stop to smell the roses as much as we should have.”

In 2018 Blindspott announced they would forces once again after almost 10 years apart. They’ve restored the foundations that formed the imaginative “what ifs”, rebuilding the friendships that force them to remember why they loved one another so much in the first place.

The jokes are still just as bad, and they revert into 20-year-olds while rehearsing, but that’s the lost magic that couldn’t break their undeniable bond.

“I’d hate to feel like it was work or a chore to be at band practice, it’s not at all. I still love it as much as I did at the start,” Alexander said. “I spend a lot of time really just focusing on the ‘now’ and not thinking about where else we could be or what we could be doing.”

This year, they were three shows into a 10-leg tour when Covid-19 forced its cancellation. Disappointed, the unexpected grounding was tough to accept, but Alexander says the most important thing was the safety and health of their fans. “In saying that I’m fucking gagging to get back out on the road and do these shows, more than ever.”

Their first album today stands certified three times platinum in New Zealand and no other Kiwi artist has managed to slip back into the No 1 place like Blindspott did this week, following the release of the vinyl. Only two international artists can claim the same accomplishment – Prince and Nickelback.

The work was well received because it was and still is “New Zealand’s album”, said Powell.

“We share the same stories,” he said. “The fans own it and are a part of it … Every moment on stage is really special to all of us, and being able to share it with guys I’ve known for 20-plus years is a gift.”