Why is an ordinary ballpoint pen held in the collection of Tāmaki Paenga Hira Auckland Museum? For The Single Object, Madeleine Chapman learns it has a story to tell about the power of privilege.

This story was first published in July 2018.

In 1978, young brown men were being arrested. With unemployment rising and the economy faltering, blame drifted through the streets of central Auckland looking for a home, and it found one with immigrants. Not all immigrants, though, just the ones from the Pacific Islands, particularly Sāmoa and Tonga. Immigrants whose temporary visas had expired were being arrested and deported. The dawn raids – early morning police raids on Pasifika homes in search of overstayers – had begun in 1974 and escalated in 1976. ‘Random’ checks were being conducted on those suspected of being in the country without a valid work permit.

In the early 1970s, the Polynesian Panthers, an activist group formed to fight for racial equality in Aotearoa, printed 1500 copies of a booklet written by their legal adviser, a young lawyer by the name of David Lange. Among the many pieces of advice, the booklet instructed young Pasifika that, if stopped and questioned by police, “Do not go with him! Only go if arrested.” Adding “go quietly – otherwise they might add more charges.” Sage advice that, even if followed to the letter, didn’t guarantee a positive outcome.

On a Tuesday night in March 1978, seventeen year old Niue man Iki Toloa was heading home after a day of work at Consolidated Plastics. After working late he had missed his last bus, so was walking home along Karangahape Rd when he was stopped by a police officer. The officer asked to see a work permit. Toloa replied that he didn’t have one as he didn’t need one. He was Niue and Niue people are New Zealand citizens. Then, according to reports published in the Auckland Star later that week, the officer “asked about three identical combs which were protruding from his pocket.” Toloa handed them over to the officer and explained that one was his own and two were from his work. The officer arrested him for theft from his employer. The combs were valued at 20 cents each.

Young Pacific Island men being arrested was nothing out of the ordinary at the time. One of the original members of the activist group Polynesian Panthers, Tigilau Ness, who was expelled from Mt Albert Grammar in 1971 for refusing to shave his afro, remembers it as a time when being brown and poor was a crime. “Back then there were charges like ‘idle and disorderly’, where brown people stood out,” he says. “If we were hanging around in the streets, which was a common thing to do, we’d be stopped and questioned and asked for identification. If we didn’t have money in our pockets then we were suspected of casing a place out or attempting to case a place or we were up to no good.”

Following his apparent confession and subsequent arrest, Toloa was convicted of theft from his employer and awaited sentencing. The police had failed to contact Toloa’s employer and when they eventually did, after his conviction, they were told that Toloa had taken the two 20 cent combs from the reject bin at the factory. This was a common practice among employees and one that management allowed.

While Ness and the Polynesian Panthers tried to figure out how to fight the conviction, the rest of Auckland, including the Pasifika community, accepted the judicial process as it played out. This came as no surprise to Ness. In the time of the dawn raids, Pasifika people were “more or less a religious lot who felt that the government was right.” Despite the monocultural system that was being enforced, there was a hesitancy to fight back “even though it was oppressive to the Pacific Island people. I think a majority of them were ashamed of the stigma put on us being Pacific Islanders.” For many Pasifika people, particularly recent immigrants, those in charge couldn’t be wrong. It took the first generation children, many of whom were secretly participating in Polynesian Panthers protests, to show their parents that being arrested didn’t always mean you’d committed a crime.

Those who saw the ‘random checks’ and dawn raids for the racial discrimination they were joined activists groups. For Pasifika, it was the Polynesian Panthers. Other predominantly Pākeha groups included the People’s Union, Halt All Racist Tours (HART), and the Citizens Association for Racial Equality (CARE). In 1978, the secretary for CARE was David Williams, a young law lecturer at the University of Auckland who was providing free legal advice to the Bastion Point protest groups.

Williams read about Toloa’s arrest and conviction in the paper and called a friend who, in his frustration, said “I mean for heaven’s sake! Even if he did steal it it’s not worth more than a university pen.” And at 20 cents, it wasn’t, which gave Williams an idea. He called the reporter from the Auckland Star who’d written the original story and told her that the next morning he’d be at the downtown police station, handing himself over for arrest after confessing to stealing from his employer. The stolen goods? A single University of Auckland pen.

As promised, the next morning Williams took a university pen from his home and confessed to the officer on desk duty at the Auckland police station his crime of stealing from an employer, a serious offence. As Williams recalls, the following exchange took place:

Williams: I’ve come to provide you evidence of a serious crime called theft from my employer, which is punishable by ten years’ imprisonment. Seeing that I’m confessing it, you have got sufficient evidence to arrest me and prosecute me.

Officer: What’s going on here? Why should I be bothered with you?

Williams: Well you were bothered with Iki Toloa yesterday, weren’t you?

Officer: Oh, this is political, is it?

Williams: Whether you call it political or not, the fact is that I am giving you a confession to having committed a crime which is a serious crime in the crimes act.

Officer: Well, you were probably doing work with it at home.

Williams: No, I wasn’t doing any work with it at home. If you look at the end of that pen you’ll see it’s got green chalk in it. That’s my four year old son playing with it and he banged the pen into the chalk and the chalk is still there. I wasn’t using it for any work at home. I stole it.

Officer: We better ring up your employer and find out whether they want you prosecuted.

Williams: You didn’t do that for Iki Toloa.

Officer: Well we’re going to do it for you.

And it was what Williams wanted, but he didn’t get it. The police refused to arrest him because his employer didn’t want to press charges. For Williams the hypocrisy was clear. “Here’s me, I confessed to having committed this same offence with an item of about the same value, and yet my employer gets approached and I don’t get prosecuted. Whereas a young Niue man working in an Auckland factory does get prosecuted without reference to his employer.” 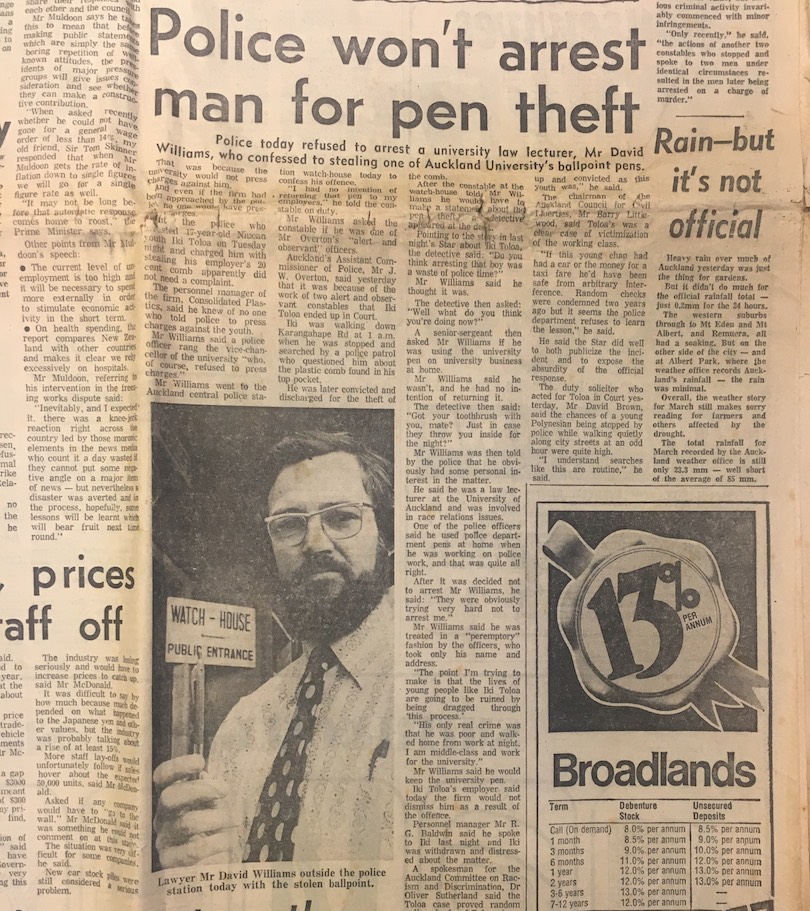 The arrest of Toloa had absolutely nothing to do with theft or criminal activity, says Williams. It was simply an excuse to prosecute yet another brown person in a decade marred by racial inequalities. “Basically anyone who was brown on the streets was liable to be stopped, especially people from Sāmoa and Tonga. They called it random, but it wasn’t really all that random. It was quite targeted.”

Following a front page story on Williams’ visit to the police station the police commissioner agreed to refer the case back to court. Once there, the police offered no evidence and so the conviction was vacated. Toloa never finished up with a conviction, which Williams considers a bittersweet victory for human rights. “The good part of the story is he got off in the end. The bad part of the story is that he was treated like that in the first place.”

Watching it unfold, Ness knew that only a “hard headed white person who has empathy for brown people” could not only follow through, but get away with what Williams did. The fact that Toloa was stopped and questioned at all proves his point. In a New Zealand where overstaying immigrants were being blamed for all societal ills, the selective targeting of certain immigrants was increasingly hard to ignore. As Williams remembers, the supposedly random checks “always wound up finding brown people to check on and not all of the British or Canadian overstayers.”

In a time when few were standing up for human rights for all, David Williams joined the Polynesian Panthers and other activist groups in following up sentiment with real action and tangible results. While the Panthers used charity work and protests, Williams used a pen. It’s not a special pen. The University of Auckland pen looks much the same as any other. But it’s also an artefact, a piece of history. In 2015 the pen was acquired into the Auckland Museum’s Pacific/Ethnology collection, and it will be on display to the public as part of the museum’s renovation and exhibition refresh over the next two years. I got to see it in the basement of the museum. Its ink is blue and there’s plenty still left in it. The chalk Williams’ son mashed into the pen is still visible 40 years later. Whatever historical weight it may hold, it’s still just a pen. And though it’s often quoted that the pen is mightier than the sword, Williams took such a statement literally. But he also knows, and stresses to this day, that it was privilege that allowed him to enact change with only a pen. And those who share his privileges have no excuses for not doing the same.

“Silence is a form of condoning. If you’ve got a chance to stand up, you should be willing to do so. For me to stand up and make a fuss, what are the consequences going to be? Actually not very serious. It’s quite important that people who are given a certain status by society do try to speak truth to power at times.”