The relationship between dog and owner often feels like a bond as deep and strong as blood. Emily Writes met five families whose dogs have a special role in their lives.

On Gaia Bellini’s first birthday she had a photoshoot with her 90-year-old great-grandmother. It was a gift from her mum Olivia. Gaia’s hair was tied up in beautiful bows and she wore Swarovski crystals.

Gaia is a standard poodle. Her “sister” Mazie is a Griffon and soon they’ll be joined by a human sibling. Olivia says she loves her dogs and she could never give back to them as much as they have given her.

“They’re my family,” she says simply. Gaia brings joy to all her community (Photo: Furtography.co.nz)

And just like any other family, they celebrate birthdays, have special outfits and enjoy their favourite meals.

Gaia is entitled, Bellini laughs. But it’s part of her breed. During last year’s lockdown, Olivia dressed Gaia up to walk the streets of Ōrewa. Bellini says she brought joy wherever she went in the mostly-retired community north of Auckland.

“When I’m having a bad day, Gaia is there for me. She gives me unconditional love; she never judges me. People who don’t own pets or don’t love animals often don’t understand how much they give you.”

Gaia and Mazie have been there for Bellini’s darkest days – so why shouldn’t they be showered with affection, she says.

Producer Bevin Linkhorn has had his schnauzer-poodle cross Dougal since the dog was nine weeks old. Dougal is the apple of his eye.

“He’s five-and-a-half now,” Linkhorn says. “Which makes him about 40 in ‘human years’, basically my age.”

He’s deeply loved by Linkhorn and his wife, director and playwright Lyndee-Jane Rutherford, for an obvious and perfect reason: “He’s a good boy.”

“He’s really sociable and loves hanging out with people, probably because he thinks they’re either going to give him treats or cuddles. Often both.” 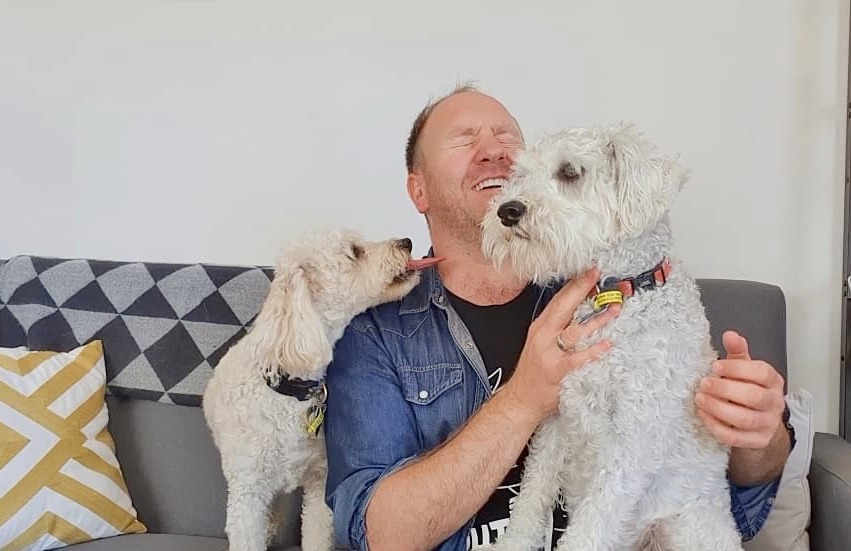 Dougal is always by their side, often travelling with the creative couple. “We hang out a lot. He sometimes comes to work with me, we get to walk to the beach every day.”

He also brings joy to everyone he meets and has an ability to know when he’s needed.

“I reckon he’s in tune with people’s emotions. A friend was looking after him one day and she received some sad news. Dougal was very quick to get himself in her face and give her his undivided attention. He stretched right up so that he could look deep into her eyes. He seemed to sense that something was wrong and my friend was upset. He’s got empathy.”

“I give him lots of walks and attention, is that spoiling? He’s very food focussed, so I’m conscious of not overloading him with treats and food. He’s got to maintain his athletic beach physique,” Linkhorn laughs.

“He does sleep on our bed, I think that’s the very definition of spoiled, eh. Dougal is our dependent. We don’t have kids, so perhaps our care and attention focus is directed at him.”

Dougal is certainly not complaining. At 48, Alix Cooper lost the love of her life, her husband Craig Cooper, to multiple myeloma after a seven-year battle. In the car on the way home from the hospital after Craig was told he had just weeks to live, he turned to Alix and said: “Right, we’re getting you a little dog.”

A week later, a litter of puppies was born and Pepsi, a shih tzu/maltese cross, came home with them soon after. Pepsi became the first and only child they had together after multiple miscarriages.

Alix says she’s not religious, but she believes Pepsi came into her life for a reason. In the short time the puppy spent with Craig, they loved each other. After Craig passed, Alix was devastated, but Pepsi was there for her.

“Pepsi saved my life,” she says. “I had nobody. The only thing that got me out of bed was this little dog. I truly owe my life to her. She gave me a reason to live.”

After Craig died, Pepsi slept on his side of the bed. And now Pepsi has become Alix’s constant companion.

“I don’t feel like I eat alone because she eats with me. I’m not making a meal for one – it’s for us. She’s my child. My everything. She’s the light of my life and the reason I could smile again.”

Every year Alix celebrates Pepsi’s birthday. Her gratitude for the little pup that saved her is endless. When Pepsi turns seven on April 9 there will be a party. “I’ll make him some salmon mousse.” Pumpkin and Dragon are soon to be married (Photo: supplied).

Beki Lee’s dogs Pumpkin and Dragon are getting married later this year. They will dine on crayfish and eye fillet steak at the wedding, to be held in Hamilton.

Lee’s “save the date” cards for the wedding feature two happy dogs that certainly seem quite in love. It’s a far cry from Pumpkin’s first months of life. When she came to live with Lee she was in pain from flea bites and a facial wound. She has now recovered and is living the high life.

That love is real and deep. While Lee was there for Pumpkin, that care and attention has been reciprocated from the dogs to their owner. After her baby was born she suffered terribly from postnatal depression. She says it was Dragon who helped her through.

“I didn’t think [postnatal depression] would happen to me. I’m such a happy person. But it got me. It got me and I was so sad. I thought, this is no way to live. Then I turned around and I saw Dragon. He saved me.”

This is why their bond is so strong and why they’re such an important part of Lee’s life. After everything they’ve been through, why wouldn’t they be given a life of luxury?

“They make me so happy. They saved my life. I just want to give them the best life that I can because that’s what they gave me.” 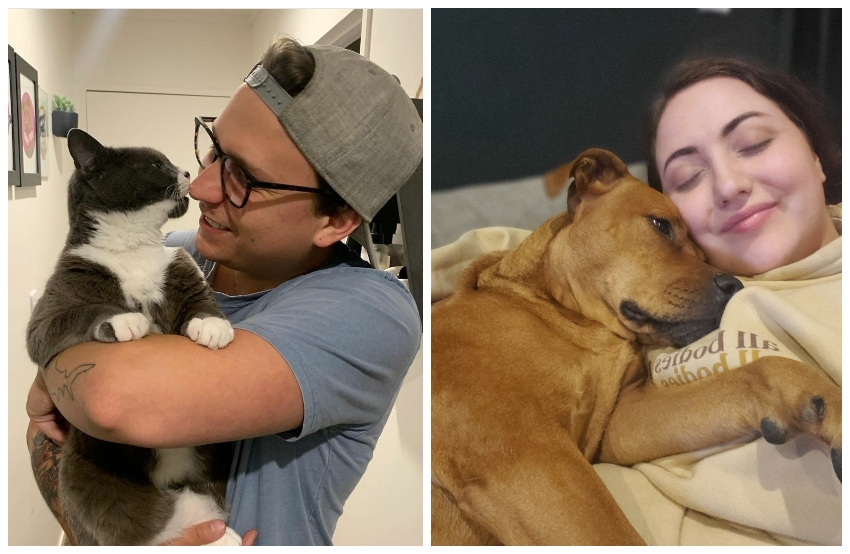 A family of four (Photo: supplied).

Nala was found starving and neglected in a park when she was just a puppy. Now she is pampered by her owners, radio personality Megan Mansell and her husband Guy.

When you visit their home there are photos of Nala – a pit bull mixed with shepherd and something else – and artwork too. Their cat Plum is similarly spoilt.

The Mansells recently took Nala on a trip around New Zealand, tailoring the itinerary around her so she’d have plenty of rivers to swim in and long walks to enjoy.

“I think we spoil her because she’s a rescue,” Megan says. “We don’t know just how bad the first months of Nala’s life were, but we can make her life wonderful now. She was left to starve and die and you think about what could have happened to her, and it makes you want to make her life better.”

Nala is what is often described as an “undesirable breed” but she has a gentle and loving nature and her big brown eyes make her easy to fall in love with.

“She could have been put down,” Megan says. “Plum was a rescue too and we don’t know about her background but now she has a special embroidered blanket just for her. Now they have this very lush life.”

Very soon it will be three years since they rescued Nala and there will be a celebration. “Of course, we will have a party,” Megan says. Because Nala deserves it.