Summer reissue: The crowd’s attention wasn’t primarily on the ball when political editor Justin Giovannetti went to see his first rugby game. As the parliamentary team faced off against the local Centurions all eyes were on the director general of health, Ashley Bloomfield, starting at openside flanker.

To describe the man as humble just doesn’t seem right. He’s too humble to call himself humble.

The doctor who led what has been hailed as one of the most successful responses to Covid-19 in the world scored the first try in a rugby game surrounded by men who looked twice his size. His response was an aw shucks shrug. When about 100 people lined up to score a selfie with him, he took all of them. Each compliment greeted with an aw shucks shrug.

Never has so much adoration been offered to someone who was so self-effacing. The New Zealand way is to be modest, but the adrenaline was flowing, would it kill the man to pump his fist?

A collection of public servants, legislators and former All Blacks travelled to the blue collar Lower Hutt suburb of Wainuiomata yesterday to play a little rugby. On paper the game was a clash between the local Centurions and the Parliamentary rugby team. In truth, it was Dr Bloomfield’s rainbow-clad warriors and those other guys wearing black. You know, Mark whats-his-face and the agriculture minister. On a beautiful sun-soaked day the director general of health took the field with the No 7 jersey. The Centurions must buy their uniforms in sizes L to XXL, because Bloomfield is an average-sized man but he looked like a toddler wearing his dad’s rugby shirt.

And then they were off. I’ve never been to a rugby game before and I didn’t study up before this, but it had been 35 years since Bloomfield last took to the field, so I figured we were on equal footing.

The thing I didn’t expect was the sound of two large men banging into each other a few metres away. There’s a thunderclap of flesh and air that sounds like pain.

We should take a moment to think about this. In the midst of a global pandemic where millions are infected with a deadly virus science doesn’t yet fully comprehend, with most of the world living under strict physical distancing measures, New Zealand’s chief public health doctor was on a field, without pads, banging into a hundred kilo slabs of muscle.

And then he scored. 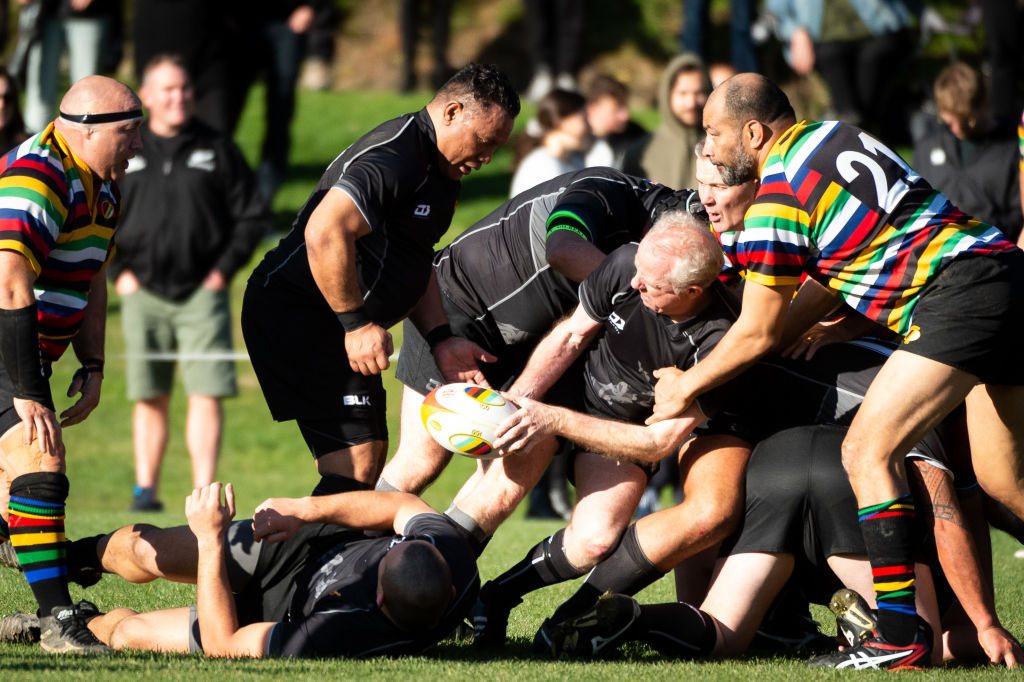 After about 25 scoreless minutes of punts, the rainbows banged into the parliamentarians up the right side. The legislative team buckled and broke. Bloomfield ran through the centre. Lower Hutt mayor Campbell Barry, being quite a good sport, passed the ball to the director general who carefully put it down. The Centurions never looked back.

“You good? It’s really important to me you stay healthy,” a member of the Centurions coaching staff told him with a pat on the back. Bloomfield just tucked his mouthguard into his rainbow socks and smiled.

The parliamentary team tripped over its own shoelaces for the rest of the first half. They got the ball with nothing but green grass in front of them and dropped it. Twice. It was a political cartoonist’s dream.

Health staff bestowed the name “the eliminator” on Bloomfield before the game. The Centurions had all but eliminated the parliamentary side in the first half. Ashley Bloomfield keeps an eye on proceedings from the sidelines, after being subbed off post-try (Photo: Justin Giovannetti)

National’s Michael Woodhouse, No 10 for the Parliamentarians, deserves credit for being very loud. He spent the first half trying to rally the front line. The heckling voice that serves him so well in parliament was put to productive use. He’s the MP who told the country a homeless man sneaked into a free stay of managed-isolation. The Centurions didn’t fall for his verbal jabs the same way the government has.

While other countries have parliamentary sports teams, the atmosphere of the 25th annual parliamentary rugby game would be hard to beat. There were a few hundred people in attendance, with a couple boxes of Tui floating around and not a uniformed police officer in sight. At one point in the game a confused-looking kererū swept over the field. Its laboured breathing was matched only by that of the parliamentarians picking themselves up again after a hit.

With the scent of sausage sizzle hanging in the air, the two sides took a quick half-time break. In a moment of near-perfect Kiwiana they snacked on orange slices. Ashley Bloomfield posed for dozens of photographs after the game. Photo: Justin Giovannetti

The scoreless parliamentarians searched for a few points in the second half. The Centurions looked to be taking pity on them and took their foot off the accelerator. Parliament scored twice, the game looked close at 14-10. Then the Centurions ran a last try.

The fans took to the field and Bloomfield’s mop of hair disappeared into a crowd of cameras and selfies. The players were battered and bruised. Is that man bleeding from his face, I asked? Yes, yes he is.

The last month has been chaos at parliament. It’s been easy to be cynical about a lot of words from political leaders. With an election in less than two months it would be easy to see a rugby game as a public relations ploy. None of that happened. There were no politics on that field in Wainuiomata. After a tough month, that was the afternoon everyone needed.

Now someone go offer Bloomfield one of those Tui I saw floating around. Or maybe he’ll just turn water into wine.