Welcome to The Spinoff’s live updates for Sunday September 26, by Madeleine Chapman. Get in touch on info@thespinoff.co.nz

Thanks for your company today. All our coverage of the Covid response is made possible thanks to Members’ contributions. Help keep the show on the road by joining today.

7.30pm: Goodnight from Simon Bridges, who wants no drama

This morning, while people were busy getting mad about Sir John Key’s hydra column that was seemingly everywhere, or getting mad at Chris Hipkins for disagreeing with it, former leader of the opposition Simon Bridges was chilling out on his buzzy couch. Never has a person looked so comfortable in a filmed interview. Speaking on Q&A in the final, feel-good slot of the programme, Bridges insisted he’s very happy and has no intention of becoming the leader of the National Party again. His unbuttoned shirt and grown-out locks suggest he’s telling the truth. His presence on Q&A in the middle of tough times for Judith Collins suggests something else. But let’s just appreciate this interview frame before starting a new week. That cushion set-up is reminiscent of a child moments after yelling “bury me in pillows!!!” The copy of his book looking somehow both accidentally and purposefully placed on the back of the couch. And is that a dog?? Powerful, striking, one for the history books.

Update: the presence of hair ties  on Bridges’ wrist has just been noted, confirming that he wears his hair in a ponytail (or bun) sometimes. Take that knowledge with you and have a blessed week. 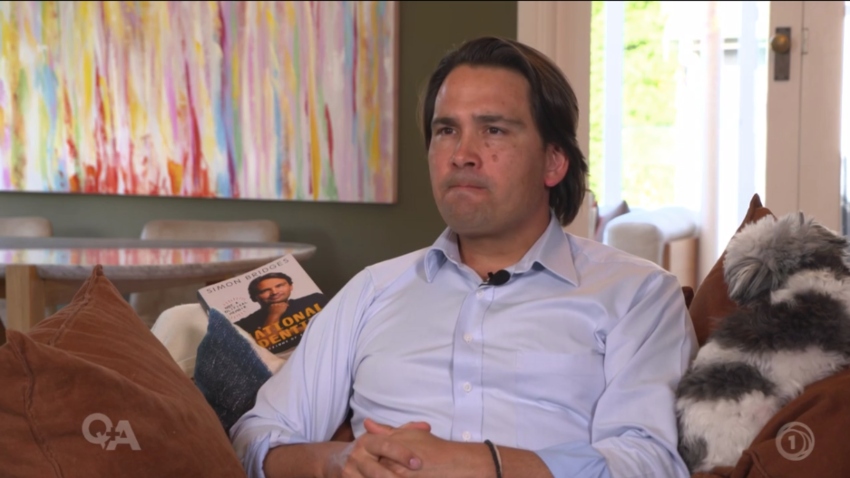 Of the 51,472 vaccine doses administered yesterday, 19,350 were first doses and 32,122 were second doses. The prevalence of second doses is promising and expected as people reach the end of their three-to-six-week break between doses. But with first dose rates currently at 76%, and the goal being at least 90% vaccination coverage, that’s a heck of a lot of people still needing to book in for a first dose. Second doses will likely (hopefully) spike in mid-October to align with the spike in first doses at the start of the nationwide level four lockdown. With special vaccination events running this week for Māori and Pasifika communities, let’s hope some of the gaps in uptake across communities start to close.

For a full walk-through of vaccinations rates by age group and ethnicity, head of data Harkanwal Singh has you covered.

1.25pm: 18 new community cases, all in Auckland, with two unlinked

There are 18 new community cases of Covid-19, the Ministry of Health has announced in a media statement. All are in Auckland. The total number of people that have tested positive to date in the current community outbreak is 1,165. The majority are recovered.

Of yesterday’s 16 cases,  eight were infectious in the community, in increase from two the day before. There are 12 people currently in hospital across Auckland with Covid. Four are in intensive care.

As well as the 18 new community cases, there are two historical and one new case in managed isolation.

Just under 14,000 tests were taken in the last 24 hours and 51,472 doses of the Covid vaccine were administered yesterday (with more second doses than first doses).

Climate activist Greta Thunberg has once again poured cold water on New Zealand’s green image, this time in a long profile published by The Guardian. As well as discussing new friendships, taking time to grow up, and Donald Trump, Thunberg brushed off suggestions that politicians are climate leaders. And specifically, Ardern.

She says she can’t think of a single politician who has impressed her. “Nobody has surprised me.” What about, say, New Zealand prime minister Jacinda Ardern, who said that the climate crisis was a matter of “life or death” at the June launch of her new roadmap to control global heating? She looks sceptical. “It’s funny that people believe Jacinda Ardern and people like that are climate leaders. That just tells you how little people know about the climate crisis.” Why? “Obviously the emissions haven’t fallen. It goes without saying that these people are not doing anything.” In April, it was revealed that New Zealand’s greenhouse-gas emissions had increased by 2% in 2019.

This isn’t the first time Thunberg has singled out the Ardern government’s (in)action on climate change. In December 2020, Thunberg tweeted a Newsroom story, quoting a scathing line within it – “In other words, the Government has just committed to reducing less than 1 percent of the country’s emissions by 2025” – and referring to “New Zealand’s so-called climate emergency declaration”.

Ardern responded, agreeing that “if that was the sum ambition of any government, then that would be worthy of criticism” before adding that “it is not our sum ambition. And it is not the totality of our plans on climate change”.

Not a year later, Thunberg tweeted another article, this one from the Guardian, reporting record greenhouse gas emissions from New Zealand’s dairy industry. She added no comment of her own, simply quoting the article, “New Zealand is one of the world’s worst performers on emission increases. Its emissions rose by 57% between 1990 and 2018 – the second greatest increase of all industrialised countries.”

When asked about the tweet, Ardern chose not to respond directly, but did defend New Zealand’s emissions. “It would be unfair to judge New Zealand based on what, essentially, are targets that were set some time ago,” she told reporters. “We are now undertaking an incredibly heavy piece of work to lift our ambition and our emissions reductions.”

And now this, the most direct and personal critique of Ardern’s reputation as a leader in climate action. We await Ardern’s response.

The former prime minister has spoken. In an opinion piece published by both Stuff and NZ Herald (incredible reach, who will get your click?), Sir John Key has criticised the government’s Covid-19 response and provided a list of ways it could be improved. In particular, Key labels the MIQ lottery system “a national embarrassment” and calls the decision to keep borders closed “the North Korea option”.

Included in his list of ideas is a cash incentive for young people getting vaccinated, financial incentives for Māori and Pacific health providers for every person they get vaccinated, and only allowing vaccinated people into licensed premises. As part of that last idea, Key suggests “maybe park the Shot Bro bus outside a few nightclubs as an incentive”. Two-for-one shots, baby.

There were 16 new community cases of Covid-19 yesterday, all in Auckland. Three of those cases remain unlinked. It was an increase on Friday (nine cases) and a key number to look out for today is how many of those cases were infectious in the community (see blue chart below for the trend throughout this outbreak).

There are 13 people currently in hospital across Auckland with Covid. Four are in intensive care.

On Saturday night the All Blacks beat the Springboks 19-17 at North Queensland Stadium to win the Rugby Championship. The game itself was very boring and yet very stressful, a fitting event for everyone watching while still in lockdown. If you missed it, you could always watch a replay or read the full match breakdown, just for kicks.

Check out our Covid tracker for the full picture, including vaccination numbers.