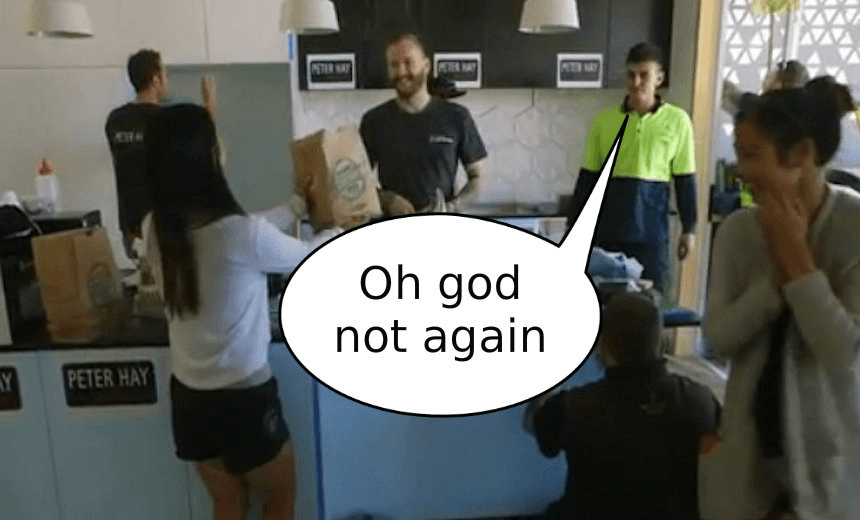 Television: The Block NZ Power Rankings Week 9 – One Last Pita For the Road

The Block NZ is all over bar the auction room shouting. There’s time for one last round of Pita Pit, and one last Power Rankings, before Houses 1 through 4 go under the hammer on Sunday night.

What would The Block NZ have been without Brooke and Mitch? Basically, the greatest character duo we’ve seen on TV in ages. So much hidden depth and complexity. On the face of it they were deeply villainous, conniving, rotten to the core. You scorned their petty strategic scoring, Brooke’s monumental sook over Grammar Zone eligibility, Mitch’s constant whinging. None of it should have come as any surprise after Brooke was caught muttering that Sarah and Minanne were “asking to be punched in the face” on the second day. Is that just how people talk in Christchurch?

But you could never truly hate Brooke and Mitch. There was a vulnerability to both of them – Mitch’s nervous giggle, Brooke’s full-blown emotional meltdowns – and an admirable determination to succeed. One of the most human moments on all TV this year was when Brooke tried to storm out of the house in a fit rage but found a big tradie wearing earmuffs blocking her way. She looked for a moment like she was about to unleash a howling, primal scream, but instead turned on her heels and thundered back past the camera, ready to explode. When she said goodbye to the house on Wednesday night’s episode, she burst into tears.

Ultimately, they were the best team on The Block. They would make deserving winners, and it would be churlish to hope that they don’t.

Funny to look back at Cat and Jeremy’s introduction on the show in episode one and remember how awful they once seemed. To be fair, everybody on the show seemed singularly loathsome for about the first three weeks, before something like Stockholm Syndrome kicked in. But for some reason these guys in particular seemed like bad news.

Of course, that initial impression couldn’t have been further from the truth. They were the ultimate good sorts – relentlessly cheerful, unfailingly positive, the perfect antidote to Brooke and Mitch. They were always up before anyone else, happily chipping away at little details in their house, but still they never found time to put handles on their doors.

With the help of a Jim Carrey-channeling Jason Gunn, Cat and Jeremy won the final week’s front yard judging. The win adds an instant $5000 to their chances on auction night and means they finish back where they started – as the judges’ and the people’s favourites.

Hayden joked that it was “time to start practising for Dancing With the Stars” as he and Jamie pulled away from House 1 for the last time on Wednesday night. He’s going to be gutted when he finds out it’s unlikely to return next year, but he should be used to disappointments after his time on The Block.

The judges seemed to hate every single thing he did. They singled out his black walls, but really what they hated was his sense of individuality and his refusal to conform to their strict NZ Home and Garden sensibilities. To his credit, he pushed back. His custom graffiti splashback in the kitchen was a final defiant gesture – one which cemented him as a sort of folk hero and made Jason and Bernadette look like a pair of doomed fools.

Hayden and Jamie go into the auction as genuine dark horses. Visiting House 1 in real life, in natural light, the black walls looked nowhere near as oppressive as the did on TV. They worked in the overall context, and the house felt ‘cool’ both in terms of temperature and style. Their back yard and outdoor entertainment area is enormous and seems like a major selling point. And the graffiti splashback can be easily replaced.

Sarah and Minanne are a modern day Kiwi success story. They started at the bottom – rock bottom, staring at bright purple walls and a dirty floor and a kind of abstract modern art interpretation of a bed – and ended up winning kitchen week by default after two other teams had been eliminated for breaking the rules.

Hearing the news, Sarah wailed in a way you don’t often see on television. “No!” her voice wobbled, “I just don’t think that’s fair.” Minanne sobbed and grinned maniacally and then started sobbing again, all within the space of about three seconds. “What the fuck?” she blurted out as if shocked and confused by her violently fluctuating emotions. Truly one of the great moments on The Block, instantly overshadowing Sarah’s marriage proposal.

While Sarah and Minanne came last by just about any measure, it’s not out out of the question that they could still win on auction night. House 2 combines a lot of the most ‘saleable’ elements of the other houses, just in a marginally shittier way. They’ve got a big back yard, but not as big as Jamie and Hayden’s. Their kitchen and bathrooms are slightly lower-spec versions of Brooke and Mitch’s, and the house maintains a fairly cohesive aesthetic from room to room.

Really, when it comes down to the auction, who the hell knows?

When John ‘Cocksy’ Cocks rose to fame as the resident builder on My House My Castle, New Zealand celebrated the arrival of its first – and most assumed last, only – celebrity builder. Few would have predicted that a ripped, topknotted Scotsman would render old Cocksy obsolete within a decade. Marty is now also the new face of UK immigration to New Zealand (replacing that strange militaristic ‘Moneyman’ character) after the debacle around his Visa provided the show’s biggest offscreen drama. A true Scottish legend, right up there with The Proclaimers and the Highlander from Highlander.

Dale’s admirable and kind of Zen-like patience in the face of perpetually indecisive and sometimes completely braindead clients Sarah and Minanne was a beautiful thing to behold. He never flipped his lid or lost his rag, although in the show’s final weeks he did take to wearing dark sunglasses all the time. Sarah and Minanne were the show’s great success story, sort of, and they should be eternally grateful to Saint Dale for his wise counsel and steady guidance.

Towards the end of The Block Brooke and Mitch’s builder Piet started to look worryingly gaunt and weatherbeaten, like a method actor preparing for a role in a stage production of Castaway. He is inarguably handsome – perhaps even more so than the famously good-looking Marty – but you do worry about the toll the builders’ 10-week all Pita Pit diet has taken on him. He was a loyal servant to the maligned Brooke and Mitch, illegally building them a fancy table outside of work hours – an act of supreme generosity which inadvertently cost them $5000.

In a remarkable display of parochialism Cat and Jeremy hired builders exclusively from their hometown New Plymouth, lured to Auckland by the prospect of all-you-can-eat Pita Pit. Josh was quiet and hard-working – he looked like the kind of guy who could have been starting fullback for the Taranaki ITM Cup team for the past ten years and yet only Scotty Stevenson would know his name – but just may not have the X-factor required to become a genuine celebrity builder.

Click here to watch The Block NZ on 3Now