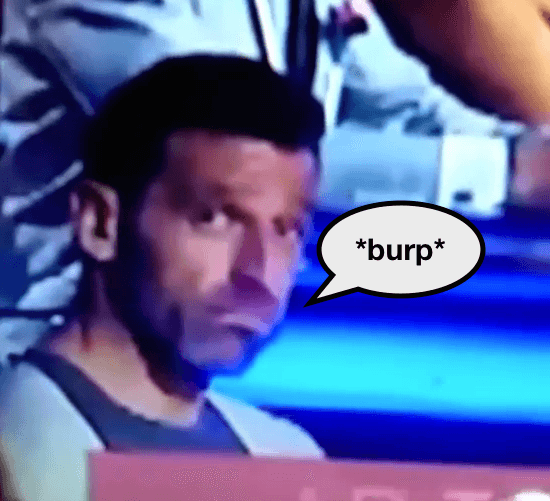 Dancing With the Stars: Power Rankings, Week Six – Nobody Puts the Burping Man in the Corner

I wasn’t around in the ‘80s, but boy oh boy do I feel like I’ve lived a thousand lives in it now. It was all about shocks this week: shocking hair, shocking double elimination, shocking pronunciation of “aka” by Candy (“akker”). And just like ‘80s, there was so much gratuitous padding on the show. They wheeled out the dancing Toddlers in Tuxedos to distract everyone from the fact that every day is a pasodoble with death, and no amount of healthy Special K biscuits is going to change that.

We lost Shane and his halter top and Ben and his acting this week, which is sad. But through all the sequins, leg warmers and terrible wigs – I saw some astounding moments of television gold. That’s why I’ve rogue with my rankings this time around, instead diverting attention to everything but the dancing itself (please note: I couldn’t resist and there is a small “proper” power ranking at the end)

1) Sweet Burps Are Made of These

Evacuate the dancefloor, this guy has just dropped a huge GASodoble. Highlight of the season, and the probable winner of Dancing With the Stars NZ 2015:

Burping with the stars #DWTSNZ

One of the bigger scoops this week was that Simon Barnett used to plaster on the eyeliner in the ’80s and hit the town with Mike McRoberts like they were in Miami Vice. Is it real? Is it a joke? I certainly don’t care.

Siobhan’s visit to see her family stole the show this week. I was charmed from the dog, to her Granny, to a charming childhood story about driving through the Chernobyl blast. Wait, three generations of women blessed with the superpowers of dance and bold statement necklace-wearing? All united by one nuclear blast that sent them on a journey to conceal their superpowers and go about a normal life? Are you hearing this James Griffin???

4) Nice Day for a, White Wedding

In a massive misstep, Jay Jay attempted to take her adopted South African son Enrique back to experience the ’80s in her pre-roll video.

You might want to consider what life was like for South Africans in the ’80s before you drag them into a dairy that is clearly still under apartheid.

5) Girls Just Want to Have Fun (and Be Human Guitars)

This “play a chick like a guitar” move is making a massive comeback because, as we all know, PC has gone mad and women haven’t been treated as objects for ages. Not since the ’80s. Why does this weird human-as-instrument move never happen the other way round? Looking forward to next week when Vanessa plays Simon’s frosted tips like a harp.

6) Another Joe Bites the Dirt

Chrystal delivered her best line since “are you going to open your mouth” this week. Midway through Dom’s post-match banter, she grabbed the mic off him:

Me when Chrystal made that sick burn:

7) I Just Died in Your Arms Tonight

The other M Night Shyamalan-style dance reveal this week was that the non-celeb dies at the end. Kind of like in Halloween: Resurrection where all the non-famous ones die before Tyra Banks and Busta Rhymes.

I’m also pretty damn determined to prove that Johnny Williams with a goatee is secretly Robot Rakete 2.0, a MediaWorks prototype whose functionality they are testing out in busy group dance formations:

9) Pour Some Glasses on Me

There were enough audience members in dark glasses to keep Rawdon Christie confused for the next ten years (need context for this niche viral joke? click here)

Shut your eyes children, Dom’s doing something very weird on the telly.

From the pre-roll footage of Simon seemingly peeing his pants, to his mesmerizing mesh vest and life-threatening choker – Si had this week in the bag. Congratulations New Zealand on having a rock god with frosted tips. We did it.

Aside from her critically-acclaimed “good butt” this week, Chrystal continues to prove that she is effortlessly good at everything. Will it be enough to pip Barnett and his exposed nipples? Not by a long shot.

Siobhan and Charlie now seem solely determined to do as many extreme lifts as possible, I still feel like they cheated a bit with those extra dancers this week.

The might of The Edge could well keep Jay Jay in the competition for longer than Siobhan, but I have a feeling Jay Jay might need that long black limousine on standby very soon.

Want EVEN MORE awe-inspiring Dancing With the Stars content? Listen to our podcast The D-Floor below: