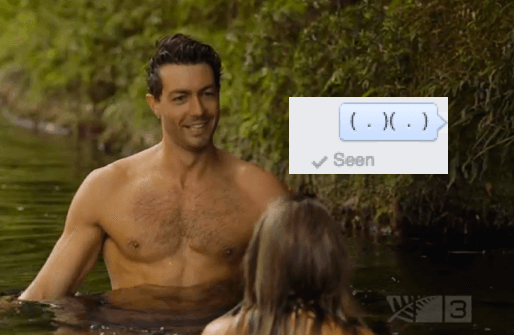 After blow-karting down The Bachelor NZ race track of love, Alex Casey delivers her fifth power rankings in our weekly series. If you missed last week’s power rankings, click here.

Call the ambulance – nay (neigh, lol get it), the morgue. I’m officially dead after this week. We’ve been thrown down waterfalls, had our wrists broken and our hearts wrung out by Artemis Green and his six lucky girlfriends. After hooning all the hot chocolate available in the Bay of Plenty, Danielle B left the competition in some futuristic garb. Presumably she was hurtled directly from the French Country House™ into space, to be amongst her shiny minions:

Kristie hyperventilated, wrote a revisionist history of the Black Doris plum and, after getting the biff, very nearly gave everyone the bash:

(seriously, that’s her favourite movie. It’s all there in black in white in these incredible pop quiz submissions I stumbled upon earlier this week)

And through it all, our Art continued to diligently work out like a big handsome rat forever trapped in an exercise wheel:

I would just like to give a brief mention to Mike Puru for truly sliding into The Bachelor’s DMs this week. Just when you thought the show was sponsored by an inanimate yet refreshingly charismatic bottle of Lindauer Special Reserve©, Mike stepped up his hosting game big time. He got busy next to the hot tub again:

And had the world’s fastest conversation with a panicked Art at the rose ceremony:

Anyway, just like Art seemingly pulled out that extra rose for Kristie from his toned buttocks, allow me to get these damn power rankings out into the open. They’ve been sitting in the dark too long, not unlike a lonely ice-cream sundae in a cart made by a woman who goes by the racist throwback handle of ‘Black Doris’. Kristie said it, not me.

1. (LW: 3) Matilda
Matilda broke her goddamn wrist for you Art goddamit. The heir to the Billy Big Balls throne has arrived. After overcoming her severe equine PTSD, she got 100% nailed by her horse named Paris, falling off and breaking her beautiful marketing/sales bones. “It hurts like a bitch” she screamed. “How much does it hurt?” “A F****LOAD”. Matilda has definitely done the lion’s share of the swearing so far. At least her broken wrist guaranteed her a rose for the next few weeks, and gave her a hall pass to chill out in this all-white room (heaven?) and read a nice mag:

With her wrist on the mend thanks to some strong coconut cream in her pina colada, Tilds made it to the second cocktail party, where she put all of her feelings on the line (a near death experience will do that to you). She’s in this for the long haul, as long as there is no more mention of horses or Paris.

Stay tuned for next week for when she seemingly vajazzles the hell out of her cast.

2. (LW: 5) Poppy
Poppy got the incredible skydiving date, where she got to flex her vocab beyond saying “Arthur” 100 million times a minute. Explaining that certain ‘love’ hormones are released when the body has an adrenaline rush, Art got a brief science lesson from our very own Professor Gaseous Maximus:

Visiting a watering hole after their plunge back to earth, Poppy’s bikini top also took a massive plunge – and Art truly saw it all.

She’s done a fart and a flash now – that’s bloody relationship progress if you ask me. They shared a tiny tots tub together (lovingly decorated by Mike Puru apparently?) and then broke Poppy’s oath with an intimate couch kiss. It was a “faultless kiss”, and a seemingly faultless date.

Alysha, the absolute fool, tried to put the extremely complicated saddle on backwards, but still galloped into Art’s heart chambers this week. At the cocktail party, she sat him down for some serious “big picture” talk. I could tell it was serious because there was an UNOPENED bottle of Lindauer next to them. Madness.

The Southern Sapphire is not thirsty for Lindauer, but details. She thinks her and Art are at similar life stages for having kids and launching careers and, let’s be honest, they are probably both at their peak attractiveness. Also, conspiracy theory: Art GREEN and Alysha BROWN. All the makings of a spinoff cluedo game right there. It was Miss Brown. With the Lindauer. In the French Country House.

So yeah, Alysha is safe as horses for now. Which, as we’ve seen, means not entirely safe. She is definitely single-white-femaling Poppy with this plait job though.

Falling in love with these Power Rankings? Make sure you click here and subscribe to our excellent Bachelor NZ podcast too – with Jane Yee, Alex Casey and Duncan Greive talkin’ Bach every week.

Dani didn’t have a particularly strong week. She needs a slap on her unmaimed wrist – and also a Bachelor medal – for using Matilda’s injury as an opportunity to cuddle up to Art. As Jane Yee pointed out on our magnificent Fantasy Suite podcast, it does seem like she thinks they are already boyfriend and girlfriend, and everything else is just working through the admin.

She’s comfortable for now, and sure to rise back up through the ranks again.

Chrystal sat out of the horse riding which, retrospectively, was obviously quite a smart move for a yoga instructor. She can’t be messing around with slings and broken bones, she’s got to be available at all times to do tree pose on the beach.

Chrystal didn’t have a lot of screen time this week, and was mostly seen patting people on the head and saying “babe”. This isn’t the last of her though, something tells me that she’s got some tricks stashed away that enormous cowl neck of hers.

I worry that Art doesn’t want a princess, and Chrystal is literally atop the royal throne. I don’t want to see her go, she’s a hell of a fire-starter in the house. Plus, her endless off-the-mark movie quotes and foley artistry are a Viner’s dream.

After last week’s tooth-chipping skin-crawling awkward yacht date, Natalie has chilled out a bit this week. Perhaps too much, she let the girls clamber all over Art until she finally approached him at the last cocktail party (post Danielle B’s ascension into space).

She wanted to see how he was feeling, but once the old talking happened she lost control of the old mouth a little bit:

As she said during the ceremony, everyone wants that rose, that beautiful little red rose. I like Natalie a lot, but I truly fear for the brunette curse.

My Dad’s Constant Confusion About Everything Bachelor-Related

This Old Guy Randomly Serving Pina Coladas on a Jetty

Pray For Stephanie the Masseuse

And finally, if you are left wanting more hard hitting analysis from this week, step into the latest episode of The Fantasy Suite, or read yet more of our Bachelor–ising in this week’s Group Think: