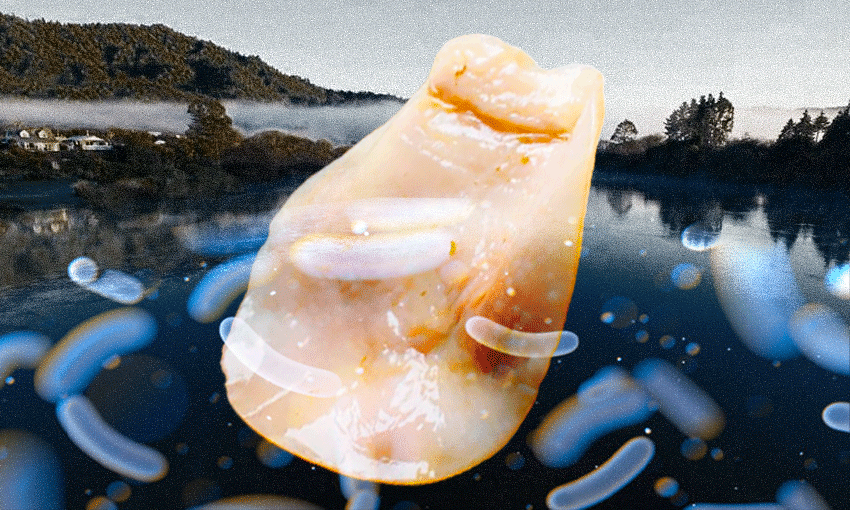 New research has revealed the power kombucha’s active ingredient can have on drastically reducing E coli levels in dairy effluent. Alex Braae asks a scientist whether that finding could be applied more widely.

Drinking kombucha can be good for your guts. And it turns out the active ingredients in fashionable fermented tea might be good for the guts of our natural environment too.

A new study from AgResearch scientists has found that scobys used to make kombucha are also effective at heavily cutting E coli contamination down to “undetectable levels” when they’re applied as a treatment to the effluent that comes out of dairy cow sheds.

Dairy farming can have a serious effect on freshwater health, which in turn can have a serious effect on population health. And when bacteria like E coli get into drinking water supplies, it can act as an indication that faecal contamination has taken place, which means other nasties might be present. Finding E coli in a town supply generally results in boil water notices being put in place for residents.

A scoby – more properly known as a “symbiotic culture of bacteria and yeast” – is a gelatinous microbial substance that has been described on The Spinoff as “a slimy hell-blob”. In this experiment, the kombucha scoby was placed in jars also containing a mix of tap water and dairy shed effluent. For anyone wondering, you probably shouldn’t drink that particular brew.

The research came out of AgResearch’s internal Curiosity Fund, which enables short projects based around researching unusual concepts and ideas. Lead researcher Seth Laurenson said the team originally wanted to explore bioplastics that could be made from a combination of on-farm products and kombucha.

Laurenson said the team had a hunch there might also be interesting results around E coli, because kombucha is well known for its antimicrobial properties.

“Where I guess the challenge lay was could we evoke that effect if we put kombucha into a stinky old bit of dairy effluent. If you put it in a pristine tea with everything it needs, then it’ll produce an antimicrobial tonic that people drink. But could we take that one or two steps further?”

Because the research has only taken place at a very early stage, it is still a long way away from being rolled out on-farm. However, the research has managed to produce a proof of concept, which is a useful starting point for any scientific endeavour.

“In this proof of concept, we’ve eliminated that faecal microbe. But where I’d quickly come in after that is to say that’s in the conditions of that experiment, and life is very different when you go to a dairy farm.”

Looking ahead, it could prove to be highly useful research for the wider agricultural industry. Laurenson said farmers are always looking to manage contaminant losses from farms.

“The discussion that we’ve had in New Zealand has centred largely around nitrogen. But frequently that discussion has included things like sediment, phosphorus and E coli, which is an indicator species for faecal microbes in general.”

It isn’t the first time kombucha has been at the heart of a novel experiment in dairy farming. A previous collaboration between Fonterra and AgResearch looked into whether it could help reduce methane, the climate-warming gas belched out by cows.

Along with the reduction of E coli, the experiment also found that the PH balance of the water was lowered in samples with scobys – in other words, the water became more acidic. And when the PH level of the water was controlled, the die-off of E coli in the sample wasn’t as pronounced.

“So we could potentially say it’s not necessarily the reduction in the PH alone that is causing the die-off. We suspect there’s some other thing going on there,” said Laurenson.

“What the literature would suggest is that kombucha changes the PH, making it more acidic, producing that acetic acid, but it’s also producing small amounts of alcohol as well, which as we know is a good antimicrobial as well.”

That in turn raises potential implications for freshwater health if the study’s finding were to be applied on-farm straight away. The way effluent is normally treated is by putting it in a big pond, and then irrigating it out over farmland, but the product of this experiment wouldn’t necessarily be good for that purpose.

Laurenson said the logical next step of research would be to take the effluent that had been treated for E coli, and then figure out how the effluent’s PH balance can be corrected, lowering the acidity level again.

He’s also interested in following up the research with more work on bioplastics that can be both produced and used on farms, given that was the original focus of the project before it shifted to effluent treatment.

Laurenson added that a major value of this sort of research was in exploring ideas, and said he had been fascinated by the properties of kombucha – in part because his wife and a lot of their friends love drinking it.