Summer reissue: Summer holidays got you dreaming of a happier, easier, gentler life in the provinces? Amanda Thompson actually made the move, and has some real talk on what to expect.

God I love Auckland. Sorry Wellington, hope we can stay friends – but my heart is a Jaffa flavoured Jaffa cake filled with Jaffas and topped with orange and chocolate sprinkles on a chocolate coloured plate surrounded by orange slices.

I wasn’t born in the city of Sails/Sales but then nobody is – Auckland’s 1.6 million people mostly come from somewhere else, each person choosing this isthmus of anti-cyclonic gloom above all other possible places. And we all know it’s terrible. I’m not going to try and pretend the city isn’t stuffed full of road cones, mosquitoes, personal trainers, people who use their phone on speaker and vape in your face. But there are literally no other downsides. Apart from the traffic, the property prices, the cutthroat school zones, the traffic, the shite public transport, the humidity and the traffic. But there are also jobs and entertainment and cuisine and fashion and so much variety to be had – if you can’t find a part of Auckland you enjoy, you’re just not driving far enough. Keep driving. Seriously, much more driving. It’s Auckland, you’ve gone nowhere in the last half an hour. But if you have two million dollars (although three would be better) and a helicopter, what’s not to love?

I don’t live there anymore. When you get to a certain age and do not have two million dollars or a helicopter, and maybe you’ve popped a couple of sprogs, you tend to weigh up the free parking, perfectly pleasant schools and affordable homes you can get in the provinces against Auckland’s offerings – wankership in your neighbours, air pollution borne illness, work until you die – and you often go for the former. It’s weird.

And every summer, more Aucklanders will leave their sweaty gridlock and come to us in our sleepy town for a couple of weeks peace and seaside calm. They marvel at the cheap housing, the quiet beaches, the pleasant locals, the endless blue skies. And every year, their holiday ends and they trundle back to their rat-on-a-treadmill existence, stop-starting on the Southern Motorway for hours and thinking: maybe I should make the move? Who could ever want to leave this? (Photo by David Hallett/Getty Images)

So should you? What would you miss, what would you love? Is it worth it? Will you end up finally getting your own home if you move to the provinces, or just a Swandri and a wispy mullet? Is there any almond milk?

As a secret urbanite faking my way through the heart of small town Aotearoa for the past 15 years, here is my very valuable advice.

This is the most common discussion that comes up with my old Auckland friends, the burning question, the big one. Could I buy a house? And the answer is a definite yes. Yes it is worth it, yes it is much cheaper and yes it is easier. If you were desperately considering that tiny cross-leased Lockwood with brown aluminium joinery in Henderson, know that in my town for the same price you could own an historic renovated villa with many bathrooms, high ceilings and a fancy kitchen. It will be five minutes from town, across the road from the school and ten minutes from the beach and you will probably have enough money left over to put in a spa. What else do you need to know? No, household basics like power and broadband are not noticeably dearer – and we do have reticulated water, sewage and a rubbish collection. Fast speed fibre connections, even. Rates can be expensive but not in a game changing way. In very small towns there are bargains to be had for less than $250k. This is not a joke, this is not a drill. It is a very real reason to move. 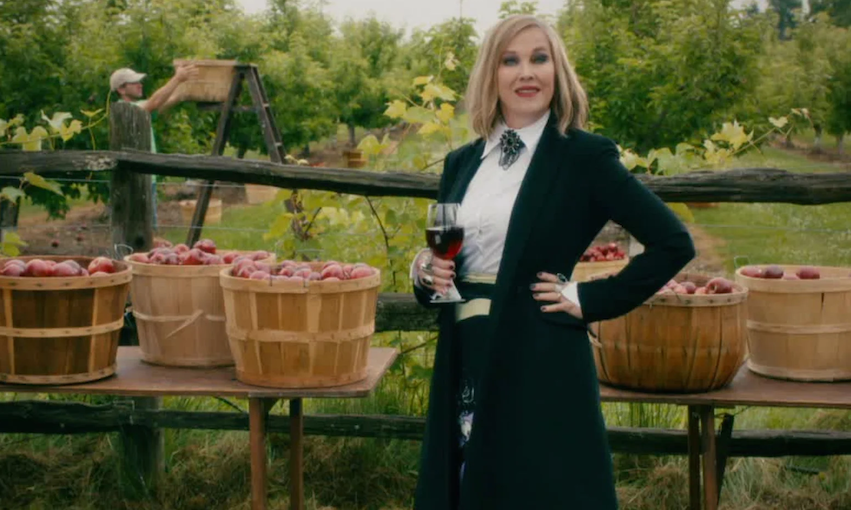 No. Funnily enough, farmer’s markets are an urban invention. In the country, farmers are too busy actually farming to worry about that kind of shit on the weekend. Either that or they’re all at Saturday sport. Small towns take their sports seriously, and anyway, what else is there for the kids to do? A local clubroom has a wood carving over the bar proclaiming the wisdom “Get them into sports, keep them outta courts.” Every rugby ground, cricket pitch, netball court, touch field, or beach volleyball arena in our town heaves with families all day, all year (kids play in the morning, a fundraising sausage sizzle and fry bread for lunch, adults play in the afternoon, ‘after-match’ in the evening.) We do have the odd market, but we save them for selling important things like knitted bed socks and rimu chopping boards to tourists. Shopping is not a viable hobby here. Quickly change your interests from collecting novelty Victorian pin cushions to competitive adventure racing. It’s a great way to make friends which, as you will see, is very important in not-cities.

On Sundays nothing much is open anyway. Except church.

Yes. Holy hecka yes. All the yesses. Parking is free and right outside the door, too – although on a related note, you will definitely need to hang on to your filthy polluting 4WD. There is one bus a day and one taxi here. Forget you even heard of Uber. RIP trains, escooters etc.

When you are thinking about moving because you long for a kinder, more connected community

Yes. People are very kind in small towns. They chat with their neighbours, and they all know who you are. The same people that cut your hair (inexpertly) will play in your social netball team and collect your kids from school for you. They will smile at you and cuddle your baby when you are trying to get the groceries in the car. These are all wonderful things. However, there can be a dark side to this lack of anonymity. They all know who you are. Ever turned into the KFC carpark without indicating because you were busy trying to text your friends to ask what they wanted? You can guarantee that the person who watched you do it will a) never ever forget that you did that and b) be your local cop, or c) your next potential boss. Everybody will know your business and what they don’t know, they will feel free to completely fabricate and pass on as a fact. Plus that teenager you got shitty at because they licked their fingers before putting your lamington in a bag will be the same teenager who is your St John’s responder when someone finally smashes into your car because you don’t indicate, you dick. So don’t be a dick. Be considerate, take the time to chat to your good neighbours, and the good neighbours will be nice to you.

When you are thinking about moving because the countryside looks cheaper, so you will have more money for your ‘lifestyle’ which is basically designer shoes, Korean noodles, arthouse cinema and craft gin cocktails every week between Thursday and Sunday

No. The painful truth about the provinces is that the arts, fashion, on-point noodles and lovely cocktails are not respected here. Neither are conspicuously extravagant lifestyles, or even shoes. You will have to accept the cult of the jandal in summer, the cult of the gumboot in winter. Embrace deep fried sushi and have hot chips with everything. Drink Lion Red but leave the pub at 9pm because Des the barman is closing up (he has sore feet and they’re out of chicken chips.) Grow your own kohlrabi because nobody round here even knows what that is and you can afford a garden now so stop complaining. Don’t come down here sneering at us for going barefoot in our supermarkets or nudey in our lakes, instead come along for the bareback ride. Let go of some of the high stress habits that were keeping you up at night gnawing your knuckles and worrying about getting old and tragic, your arse getting squarer and squarer in those ironic vintage wide leg Wranglers, pathetically still trying to be relevant by memorising the Laneways lineup. Let it all go. 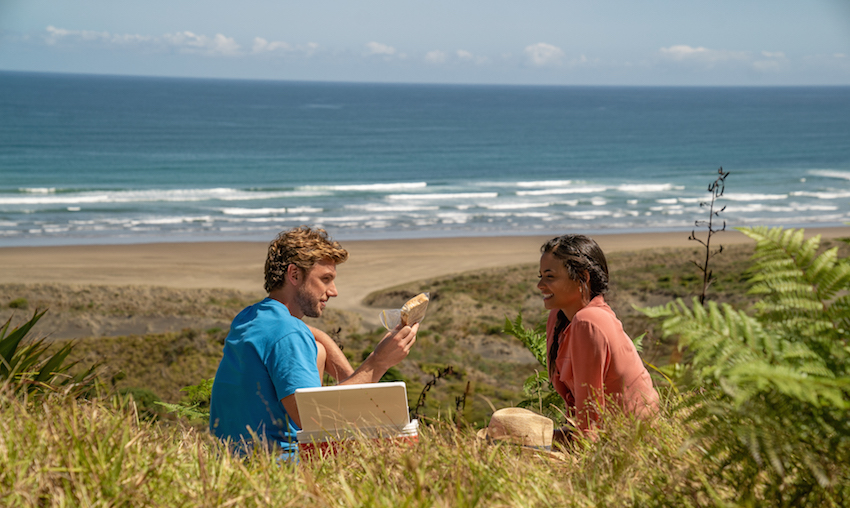 A scene from the NZ-set Netflix romcom Falling Inn Love

Yes and no. Yes, you can nip down after work and have a surf every day. Yes, the beach will be wide, empty, pristine and beckoning – except when you want to use it. When you live in a seaside town you get resigned to the beach being full to the brim with Auckland wankers at the very best times of the year. Blocking all the roads with Audis and buying up all the Frujus, they torture our exhausted surf clubbies by constantly trying to get selfies with them and then launching their comically oversized inflatable flamingos outside the flags, in a rip, after they’ve had a few cheeky pinots inside the liquor ban zone. While wearing those stupid wide leg Wranglers.

Also, it is blistering hot summer for about ten months of the year and the only air conditioning is at Countdown. It can get old.

Yes. For the price of an average Auckland house you can afford enough land for several ponies. And a couple of dogs, one of which will be blind and fart under your bed, while the other keeps trying to herd the ponies. You might also have some ducks, a few cats, a cute pet lamb called Mary that you got for calf day last year but which is now fifty kilos of reeking mutton that still tries to get up on your couch with you and one cunt of a chicken that attacks to kill every time you go to the clothesline because it’s actually a rooster.