A new poll has found a majority of New Zealanders want the government to act now to combat climate change, but overall we appear more complacent than our international peers. George Driver looks at what the research tells us about the country’s views on the climate crisis.

New Zealanders want action on climate change – just not as much as people in other countries, according to a recent poll.

An Ipsos study, released on Monday, surveyed 21,011 people in more than 30 countries this year, including 1010 in Aotearoa. It found that compared to other countries, we are less concerned about the need for urgent action on climate change, less likely to take action to reduce emissions and are more trusting that the government can get us through the crisis.

In total, 57% of New Zealanders believed the government would be failing its citizens if it didn’t act now to combat climate change, compared with the global average of 65% around the world and 63% in Australia.

A majority of New Zealanders (60%) also believed businesses should act now to combat climate change, but less than the global average of 68%, and 69% in Australia.

Although 3 in 5 New Zealanders feel an individual responsibility to tackle climate change, the country ranks low in a global comparison Q: To what extent do you agree or disagree with the following: If individuals like me do not act now to combat climate change, we will be failing future generations

When asked whether people would be failing future generations “if individuals like me do not act now to combat climate change”, we were near the bottom of the table with 62% agreeing with the statement, compared with 72% in other countries. In this category, New Zealand only showed greater concern than Saudi Arabia (61%), Hong Kong (61%), Japan (59%) and Russia (46%).

The survey also found that while a majority of New Zealander were taking action, or were likely to take action, to reduce their emissions, on average people overseas were doing more.

But we have no excuse for being more complacent. New Zealand’s emissions record to date is among the worst in the OECD. Aotearoa had the fifth highest gross emissions per capita in the OECD in 2019 (behind Australia, the US, Canada and Luxembourg), while our emissions increased by 26% between 1990 and 2019, the fourth highest rise in the OECD. According to the Ministry for the Environment, this was “mostly due to increases in methane from dairy cattle digestive systems and carbon dioxide from road transport”. Net emissions are also expected to continue to increase to 2025.

In almost all countries there was an enormous disconnect between the majority believing the government should take urgent action to reduce emissions and a minority believing their government had a clear plan to do so. But the survey found New Zealanders were more likely to believe their government had a clear plan to tackle climate change, with 37% agreeing with the statement compared with the global average of 31%. The NZ government has committed to reaching net-zero emissions by 2050, but the target excludes methane emissions from agriculture – a sector that accounts for 48% of the country’s emissions. The Climate Change Commission recently released a detailed plan for how Aotearoa could reach the net-zero target, but the government is yet to release its plan to reach its emissions targets –one is due out before the end of the year.

The survey also highlighted a generational divide, with a certain group born in the decade or two after WWII feeling the least amount of urgency for “acting now” against climate change.

Fifty percent of those aged over 50 thought the government would be failing the population if it didn’t act now to combat climate change, compared to 67% of 18 to 34 year olds.

Opinions were also correlated with education levels, with 51% of those with a high school education or lower believing the government should act now, compared with 66% for those with a post-grad degree or higher.

When asked about the likelihood of avoiding flying in the future, New Zealand ranked last 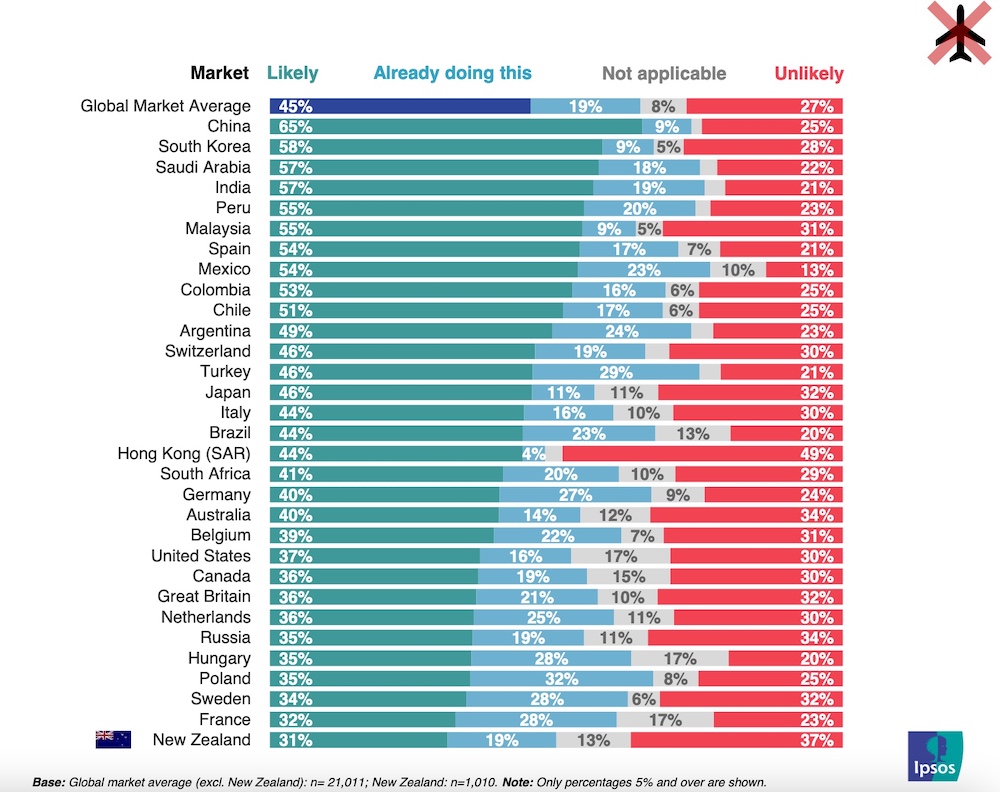 Q: Thinking about things you might do in order to limit your own contribution to climate change, how likely or unlikely would you be to make the following changes within the next year? – Not flying, or replacing some flights with train or bus journeys

University of Auckland psychology professor Quentin Douglas Atkinson studies the psychology of climate change and says there are some cultural factors which may explain why we are less likely to take individual action on climate change. Our industries and behaviour are arguably less compatible with emissions reductions, compared to places with good public transport that are less reliant on agriculture.

“For example, we’ve developed a car culture that makes it difficult for many Kiwis to imagine how life would work without relying on their car,” Atkinson says. “We’re exporters of meat and dairy products and have high rates of meat and dairy consumption. We are geographically isolated and like to fly a lot.”

He says the country’s self-image may also hinder our perception of the level of action we need to take.

“We perceive ourselves as ‘clean and green’ and market this image to the world. This can result in what is known as ‘moral licensing’ – small virtuous acts, or the perception that one is virtuous, can make one less likely to take truly meaningful action.”

“All this is particularly true of younger people who will shape the New Zealand of the future. And publicising research like this Ipsos poll can help people realise we aren’t the global environmental saints we sometimes think we are, and help to motivate more meaningful action.”

Massey University senior lecturer Jagadish Thaker is an expert on climate change communication and says the poll shows climate change action is not yet a priority for many New Zealanders.

“It shows a low level of guilt for the lack of urgent action on climate change,” he says. “Kiwis show a lower priority to climate change than Australians and that is a national shame.” Q. How do you expect your personal behaviours to change once any restrictions on your life because of coronavirus are removed? Do you expect to do the following things more, less, or the same amount as you did before the coronavirus pandemic? – Doing errands & journeys on foot or by bike rather than by car, e.g. commute, school run, trips to the shops

But Thaker says the fact that three out of five New Zealanders agree that businesses need to act now on climate change means there could be greater consumer activism. He says more action could also be taken to help people understand what they can do to reduce emissions.

“We need to help the public understand not just the science of climate change, but how climate change translates into everyday impacts and what they can specifically do to act on climate change.”

But the survey’s results might not be as clean cut as they seem. University of Waikato researcher Taciano Milfont is a leading academic in conservation psychology and cautions against drawing any firm conclusions about New Zealanders’ lack of concern about climate change based on a single poll. He says it is difficult to compare survey results between countries without more robust controls for how the questions may be interpreted in different cultures.

“One thing we often do in cross-cultural studies is first make sure that people understood the questions the same way. When you make these comparisons there is an assumption that those comparisons are meaningful, but we don’t know that here.”

Looking at it purely as a survey of 1010 New Zealanders, it shows a clear majority want the government, business and individuals to take immediate action on climate change, he says. 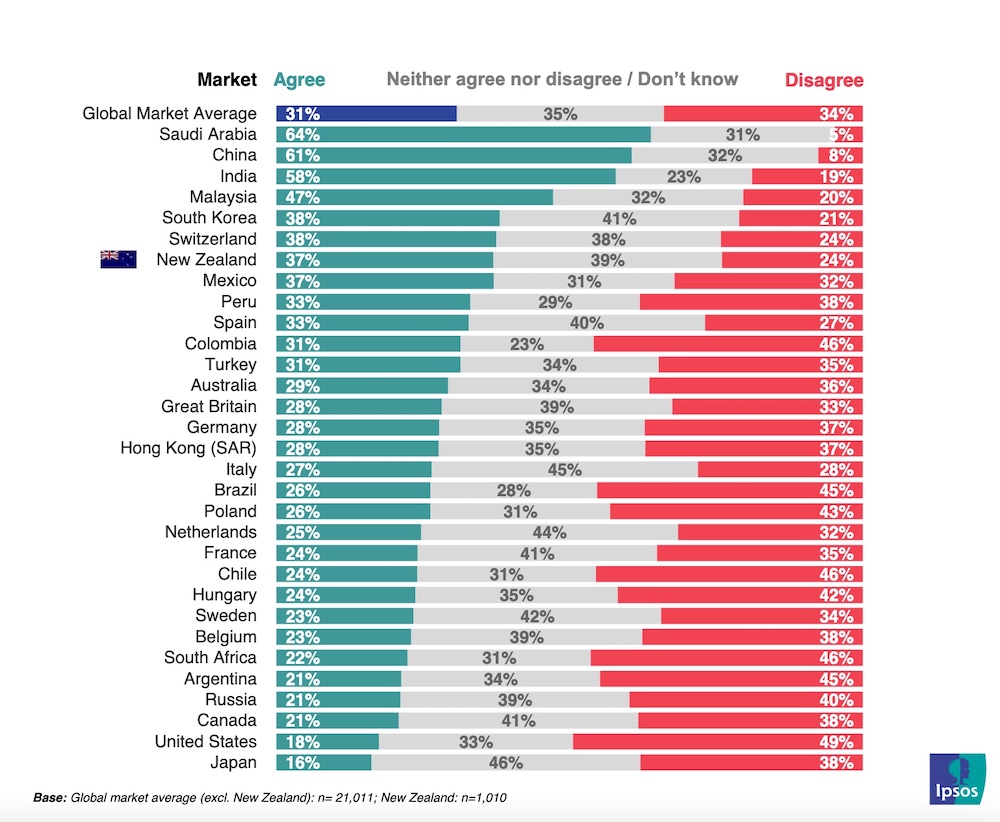 Q: To what extent do you agree or disagree with the following: [MARKET]’s government has a clear plan in place for how government, businesses & people themselves are going to work together to tackle climate change

The level of concern and understanding about climate change is also increasing over time. Milfont published a paper in Nature Communications this year about the generational divide in climate change opinions in New Zealand. The study looked at how the opinions of different age groups had changed over a decade. While there was a generational gap in people’s beliefs – with younger people more likely to believe that climate change was “real” – all age groups showed a consistent increase in the belief that anthropogenic climate change exists.

This trend is consistent with other public opinion polling. Insurance firm IAG has conducted a survey on New Zealanders’ attitudes towards climate change since 2018 and found 79% agree that “climate change is an important issue to them personally” in 2021, up from 72% in 2018. More than 80% also believed climate change would result in more extreme weather. But people were pessimistic about the government’s response, with 40% believing the country’s response to climate change was on the right track, 35% believing we’ll meet our emissions targets and 41% thought the country wasn’t moving fast enough.