Noticed a lot more sea lions popping up around our inhabited coastline in recent years? There’s a good reason for that, explains Erica Wilkinson of DoC.

Did you know that when a New Zealand sea lion wants to play, it leans down on its front legs with its head close to the ground – the identical “play bow” that we love to see our pet dogs do?

Or that, when it’s scared, a sea lion will charge full pelt at a threat, stopping centimetres away from the target? Think of this as a terrifying game of chicken. Scientists call it bluff charging.

We’re lucky we get to know this animal’s behavioural characteristics. We very nearly didn’t. Just a few hundred years ago, humans hunted sea lions to near extinction for their fur. We only stopped when their population was so small, the remaining sea lions couldn’t meet the demand of the industry.

Sea lions were once found throughout Aotearoa – yet for a long time, they didn’t breed on the mainland because we kept killing them. They were forced to flee to the extreme south of their habitat. That was until one brave sea lion turned up on the Otago coast in 1993 and gave birth to a pup on a local farm. It had been 200 years since a sea lion bred on our shores.

This in itself is a big deal because sea lions are incredibly philopatric: they give birth and raise young where they themselves were born. It’s very hard to get them to break that cycle. But that one sea lion, “Mum”, did. Since then, a steady trickle has followed her lead. 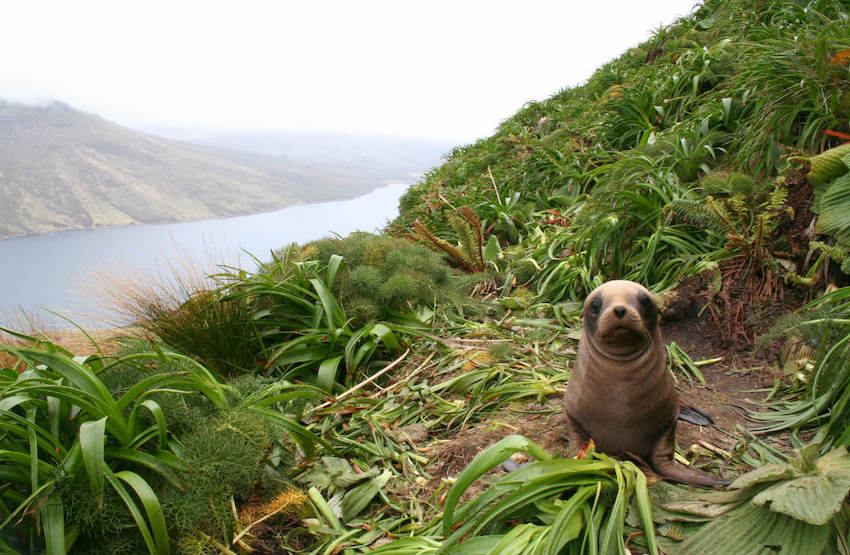 A sea lion pup up a hill (Photo: Andrew Maloney/DOC)

Today, we treat these charismatic megafauna much better. We need to. There are an estimated 12,000 left, and New Zealand’s sea lions are among the rarest in the world.

Once they were hunted, but now Aotearoa makes global headlines by closing off a busy street in Dunedin so that a mother and her pup can have peace. That’s the New Zealand I’ve grown up thinking we are. Somewhere that all of us can be proud of.

This summer on the mainland, New Zealand sea lions are breaking records. Twenty pups are expected to be born – the most in a single year since sea lions returned.

This new mainland population is excellent news. As the species is now breeding in several locations, the chance of extinction is reduced. If a disease or a storm sweeps through one of the populations, everything’s not lost. As more mainland pups reach breeding age, the number of pups should continue to increase. If we treat these animals well, we’ll see more sea lions around our coast.

What humans are doing

Sea lions love their routine, which makes life a little easier for the New Zealand Sea Lion Trust and the Department of Conservation (DoC), which track and tag the animals. One female, for example, gives birth at the same time and in the same place every year.

It’s not all plain sailing though. Over summer, sea lions will often give birth in thick bush. This means a tagging team will need to crawl through to find the pups. You really need to tag them as soon as possible and preferably when the mum isn’t around. By the time a pup is six weeks old they already weigh 20kg, and their mother is fiercely protective.

NZ Sea Lion Trust’s Jordana Whyte offered one piece of key advice for us humans: be as boring as possible if you run into the animals. Even though her team carries protective shields, the sea lions mosey on up and poke them with their noses to check out what’s going on. And for the love of charismatic megafauna, don’t try to pat them.

Sea lions are fearless, confident, and curious. They’re not scared of humans. But if we get in their space, they will be incredibly territorial.

A male sea lion just outside of Dunedin got it into his head that he owned part of a rural road – every time a car came around the corner he’d leap out of his ditch and challenge the car. For a time motorists had to go the long way round. What next and the dangers that lurk

The mainland population is increasing, and in other good news, Stewart Island/Rakiura was officially declared a breeding colony in 2018.

But we’re not out of the woods yet. Far from it. The mainland and Rakiura populations only make up 2% of the total population. That’s not enough to save this species.

Sea lions are labelled “nationally vulnerable” for a reason. Between 2000 and 2010, pup production at the largest breeding colony on the Auckland islands declined by almost 50%.

The third lowest pup count in the history of monitoring was taken in 2014, prompting the development of the New Zealand sea lion Threat Management Plan (TMP) by DoC, Ngāi Tahu and Fisheries NZ. The TMP looks across the whole range of threats affecting sea lions. It’s the same approach taken with Māui and Hector’s dolphins.

There’s a perfect storm of reasons for the decline: location, disease, and bycatch are all partly attributed.

Sea lions took up their stronghold in the subantarctic because they had nowhere else to go, having been forced to flee by humans. The problem is the food isn’t very good, the climate is tough, and the terrain is dangerous.

You can tell by how the animals look that they’re not living to their potential. They’re smaller and less robust than those on the mainland. They’re also less likely to breed.

One of the problems with a philopatric species is it’s hard to get them to change from breeding where they themselves were born. Even when the conditions are awful. Campbell Island’s breeding colony, for example, is constantly affected by gale force winds, massive storms, and boggy terrain. It’s common for pups to die. They fall into mud holes with steep sides and they can’t escape. In 2014, 60 pups were manually rescued by the field team.

DoC now installs wooden ramps to let the pups save themselves, and they get used a lot. Next summer DoC and Auckland Zoo are also trialling pup shelters to give the animals support over that early few weeks when pups are the most vulnerable. 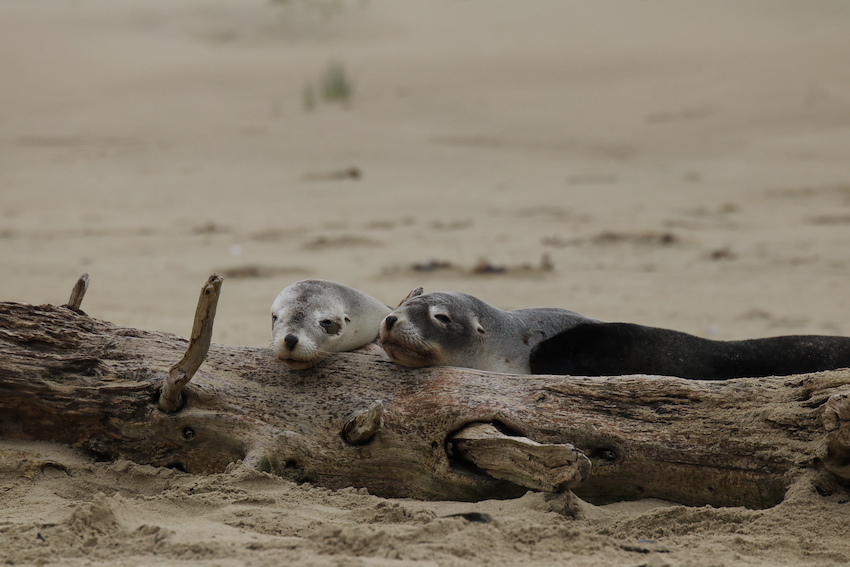 The animals are also at risk of being accidentally picked up by fishing vessels. This can be devastating. For example if a breeding female is caught and drowns in a trawl net, you lose three sea lions. She’ll have a pup waiting onshore, and a fertilised egg in her uterus wall. In recent months, four sea lions were accidentally fished, three of which were female.

A huge effort that has gone into reducing bycatch in the Auckland Islands squid fishery. MPI sets a maximum limit on the number of sea lions that can be caught before the fishery is immediately closed – currently 52 annually.

Trap doors are also installed at the top of trawl nets to give the animals an escape route. There were concerns raised when these trap doors were installed. Were they enough to ensure sea lions escaped uninjured and didn’t die elsewhere? Following research in recent years, most scientists recognise these trapdoors do work. Dr Ben Sharp, principal scientist at MPI says they are why bycatch numbers are now fewer than 10 a year. Once, about 160 sea lions were dying each year in fishing nets.

The animals are also susceptible to Klebsiella pneumoniae, a type of bacterial infection present in some colonies since 2000. It caused more than 60% of pup deaths in a colony on Enderby Island between 2013 and 2018. DoC has supported research into what causes the pups to be so at risk, and we might finally be at a turning point with this disease. Trials into a mitigation method take place this summer.

Firstly, prepare to see more of them on the mainland. We hope to see them on more beaches and perhaps even the North Island in the next decade. They are coming back to where they belong.

Here on the mainland, they don’t have to swim as far or dive as deep to find food. They reach sexual maturity easier, which indicates an easier life.

Be ready to live around them. We’ll need to make sure they don’t contract diseases from our pets, or us. In this doom-scrolling world full of environmental worst-case scenarios, the return of sea lions is a rare gem. Let’s be ready to welcome them home.

Erica Wilkinson is the Department of Conservation’s threatened species ambassador