Tom Eats recounts his personal experience of the moment his hearing came back.

The social occasions with family and friends frustrate me the most. I’m fortunate to have a close and strong family, and yet much of their news, literary references, debates and silly jokes pass me by. Regular efforts are made to rope me in and conversation will pause while someone tries, but soon it takes its own course and flows away. Over time I’ve grown to fear the sudden spotlight, of groping blankly for an appropriate response while the table gazes on. I feel somewhat powerless in those moments. Being left standing is doubly hard when it’s people who are close; public settings are less forgiving, but there is a strange kind of solace in fading to the margins. I have my strategies to understand as much as I can but these are working less well as I age. Hearing aid tech has tended to add volume but with little improvement to precision, and signing was not a serious option with my condition.

When I was two years old I became unwell with measles encephalitis, from which few were expected to survive; those that did usually became wheelchair users. I survived after a few weeks in hospital, and then the next challenges were standing and walking; after that my writing and reading were what needed most work. Over the years since, my balance and coordination have become manageable with practice, and my eyesight has only worsened incrementally. But at eight I became ill again with tonsillitis and since then my hearing has ebbed like a lake running dry – each tide a little lower, with the odd fluctuations for weather.

Two weeks BC (before cochlear)

I gather that many of the patients who join the cochlear implant programme have lost their hearing in a way that feels quite obvious to them. A question in the application form asks about the effects of my hearing loss. A penchant for pedantry has me pondering my response: what have I lost – and what have I got to lose?

It is early March 2021. I’m in the planning stage of a process to have a surgical implant, supported by the Southern Cochlear Implant Programme, and it’s this question of loss that I’m focused on. Not so much my hearing loss so far, but the loss of what hearing I still have left. The operation severs the connection between the ear and the brain, so afterwards the ear will be mostly ornamental.

A cochlear implant is essentially an ear bypass; a device is put under the skin on the side of your head that reaches down to connect to the auditory nerve. A processor a bit like a hearing aid sits outside, sending sound down the implant to the brain through a small magnet. A diagram showing the workings of a cochlear implant (Image: Getty Images)

For me, the cochlear implant represents a singular idea – that I could once again stop feeling like a bystander in the lives of people I care about and work alongside. More than that, it holds out to me the promise of surprise, of getting to know people on their own terms, of connecting with strangers, of having more than basic conversations in public spaces. Doubt, a potent ingredient in life’s cocktail of disabling aspects, could be shunted to the margins.

A few years ago I was diagnosed with Capos syndrome, a new, rare genetic condition with a tiny group of sufferers – about 50 worldwide. The sample of studies to provide fuel for optimism is precisely one – a 14-year-old girl in Turkey whose voice comprehension went from 13% to 80% in a calendar year post-implant. My comprehension test is at a similar start point. Youth is an advantage, however, and to my knowledge I am the prognosis for the others who have been diagnosed with Capos, being the eldest by 20-odd years.

Most of my life has been spent in mainstream schools and environments, so I don’t know anyone with my particular combination of challenges. In my more melodramatic moments I’ve likened myself to a fly on a windowsill, mystified by the regularity of getting up again.

My experience of conversations is that they frequently become a fudge without context, a best guess at missing words often leading me off on a tangent that leaves the other person baffled. Doubt hovers around, never far – but hesitation and awkwardness can be contagious and for a long time I failed to recognise that this affected others just as much as me.

There are many heroes in my story, my family and friends who regularly brave the doubt, bridge over the hesitation, and with a bright and easy smile put everyone at ease. My wife, my mother and others offer regular windows into conversations, and I am very grateful for their patience in repetition and to keep reaching out despite my often flustered response. I find frustration often tagging along with doubt; social interaction is full of tiny cues and knowing that I am likely to be missing at least some of them makes it hard to be sure.

Those frustrations are manifold but in particular there has been a part of me that has wanted to make a difference – in part, I’m sure, because I’m regularly surrounded by people who do this for me. Life is full of give and take, and I’ve often felt that I take more than I give.

The way I perceive sound will fundamentally alter with the surgery, and with it the chance of one “normal” sonic experience I’ve been waiting for a long time for – seeing (and hearing) Crowded House play live. 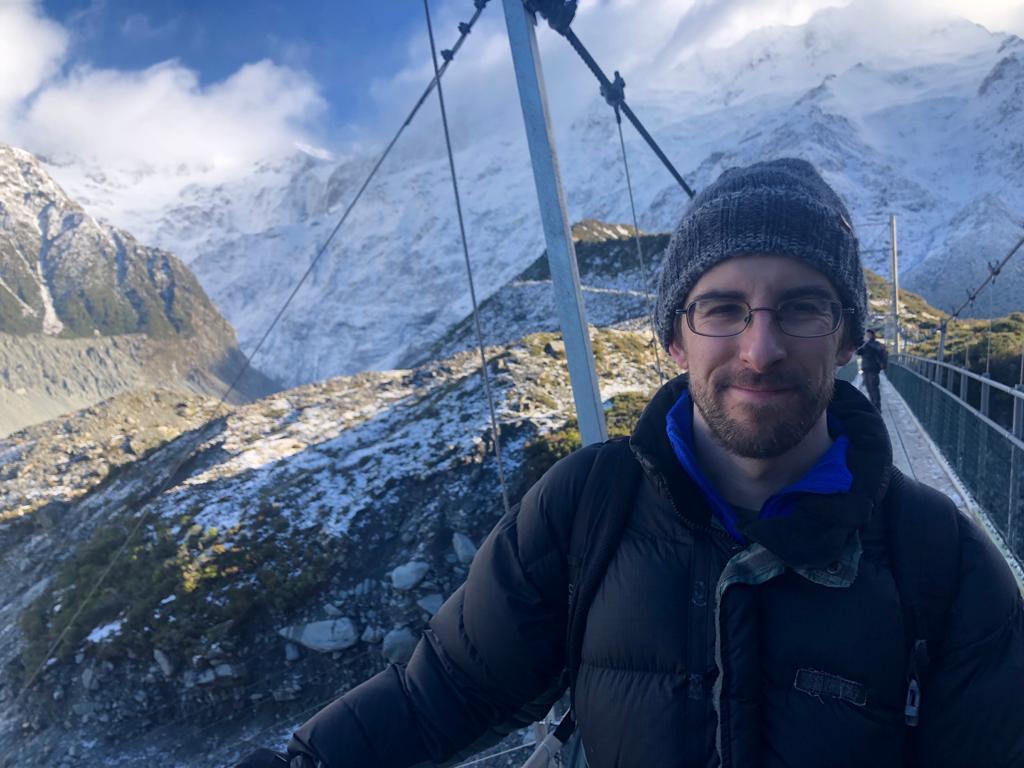 Waking up after the operation is full of soft-focus hues. Whatever it is they give you to wake you up contains a solid dose of feelgood. The following couple of days in hospital are marked by dizziness, urinating into a bottle and a spot of throwing up. To stop the ceiling spinning I fix an innocent light fitting with a penetrating stare until it passes. A zimmer frame is at my bedside, and aids a veering exit after two nights in hospital. My fretting about how much hearing I’d lose is abetted through a functioning left ear.

A month later I’m staggering and staggered; life feels surreal. The added concentration required to navigate the new world has been ladled onto the after-effects of surgery. I appear intoxicated in my movements, lurching tentatively along. I’ve gradually got used to looking around as I move, so crossing roads solo becomes possible.

Other possibilities crouch hazily in the middle distance. A few days after the surgery I attend the clinic where the device, a bit like a hearing aid with a magnet, is attached to the part inserted during the operation.

Daydreams about what it might be like to hear clearly have had an occasional internal screening, but I never quite had this vision in mind. Before the fabled switch-on moment the clinician said that success would be hearing bloops and bleeps. The breath in the room is on hold as she starts to crank up the machine, and a barely audible sigh as a beep bloops into my head with a small explosion.

The definition of success met, we somehow proceed to propel beyond the definition. I am able to discern words, each starting with an accompanying bleep. Sound comes through with a jolt and an echo of sorts as the brain tries to fathom how to reconcile two different sources of sound.

I’m led into the test room, my wife and parents growing more excitable as I recite the words from the test while not even looking – gearing towards near perfect scores where previously I had ranged between dead zero and about half.

There are little moments that illustrate progress – being able to hear from the backseat in the car, hearing the shopkeeper telling me the bagels had gone, having short conversations on the phone. Later on, my mum tells me one of the biggest successes was seeing me having a conversation while leaning back in my chair, rather than straining forwards all the time. Tiny little shafts of promise fuel my journey as I swing between agog and a kind of flowing doziness, lumbering dazed through gradually sharper experiences.

Eventually, small glimmers of euphoria start to burn through the fog: talking to my mum as she walks behind me down the street, hearing what my uncle is saying about the rugby, starting to think ahead about what I could do in the future. It may sound a bit saccharine, but I get most encouraged at the possibility of volunteering, or getting close to the frontline in my work. My hearing loss has frequently made me feel small, as I was always asking others for help. It might be that my cochlear could allow me to support others without needing extra help to do so. To feel important. To make a contribution. Mauri ora. For me, life seems like it could have something it has sometimes lacked – purpose.

Doubt takes a backward step, optimism puffs out its cheeks.