She won comedy’s top award for her jaw-dropping show about eloping to the UK as a teen. In a new podcast, that story is fleshed out in all its shocking glory.

These days comedian Angella Dravid’s biggest relationship gripes are about how finely her significant other dices food. “He was cutting up bacon so small. He minced the bacon. I was like, do you not like texture at all?” she says, wide-eyed.

“They way he chops onions was the last fight we had. I couldn’t tell if he was crying because of the onions or me.”

Dravid and her texture-averse spouse are in lockdown along with the rest of Auckland while she prepares to release her new podcast Love, Rock Bottom and Other Triumphs, a serialised retelling of the story of her first marriage released on Audible this week.

Audiences lucky enough to have seen Dravid’s award-winning 2017 stand up Down the Rabbit Hole will be familiar with the outline of her incredible story. As a bored and lonely teenager in the early 2000s, Dravid discovered Yahoo chat rooms and her first taste of popularity. That was where she met Gary (not his real name), a 47-year-old youth orchestra teacher who groomed her and enticed her to run away and join him in the UK. It’s an awful story of predation and isolation that ends with Dravid in prison for assault. Yet somehow, when she tells it, it’s a story that makes you cry with laughter.

Over eight episodes, Dravid relives the experience, honing in on finer details and giving a much wider context than the one-hour stand up allowed. “Tough love” is a term she uses a lot to describe the physical abuse she received as a child, and how it manifests later in her ill-fated marriage. Even for those who have seen the show, it’s a unique listening experience, shocking in places and moving in others. And constantly, unexpectedly, funny.

In order to capture the voice of her younger self, Dravid had to force herself to remember what drew her to Gary. “The hardest episode to write was the second one, which was about the love between these two people. I had blocked so much of it out that I couldn’t even remember what this guy was like, or what I found attractive about him.”

She says she could remember his physical traits but none of the “warm fuzzies”. “I’ve had a lot of problems trying to make that voice sound authentic and real. It comes across as sarcastic and hurt.”

After Gary declares his love for her, she lies to her mother that she’s visiting her dad in Australia, and jumps on a plane to London. Gary proposes while they’re at home watching the film Blade. Having expected to settle into domestic bliss, she instead finds desperate loneliness with a stranger in a foreign country. Things begin to unravel, and in an excruciating scene, Dravid grabs a photo of Gary and his ex-wife and pushes it over his head.

As Dravid tells it, she makes mistake after mistake in dealing with Gary and the police, making her conviction all but a given. A stint in prison and then three years in a bail house follow. Ultimately, it is during those years in supported accommodation, away from Gary and beginning to stand on her own two feet, that she starts to find herself. “The bail house part of the story is the least novel but it was a pivotal time in my life – I turned 21 in there. That was my favourite part to write,” she says.

“I mean everyone’s in lockdown right now, but imagine being in lockdown with 23 other women.”

There are a number of moments in the podcast where you find yourself wondering why no adults are intervening. Friends in Gary’s life appear oblivious; neither the judge, police or lawyers question the power dynamic between this teenager and her middle-aged husband.

Dravid understands now that what happened wasn’t her fault. “Red flags don’t exist in first love,” she says. “As a kid, you don’t have any point of reference. If something’s good, that’s the best it’s ever been, and if it’s bad that’s the worst it’s ever been.”

Turning trauma into comedy is something Dravid has perfected over the course of her relatively short career, but she says working on the podcast still uncovered some unexpected feelings. “With each new recording, I felt like I was unpacking more shit. Just realising, oh he drove home with a 17 year old. That… would feel really wrong. When I apply that situation to me as a 35-year-old woman now, that’s when it started to hit.

“It was quite expensive getting therapy. So I also used Josephine, the director and co-writer, for therapeutic support,” she laughs. 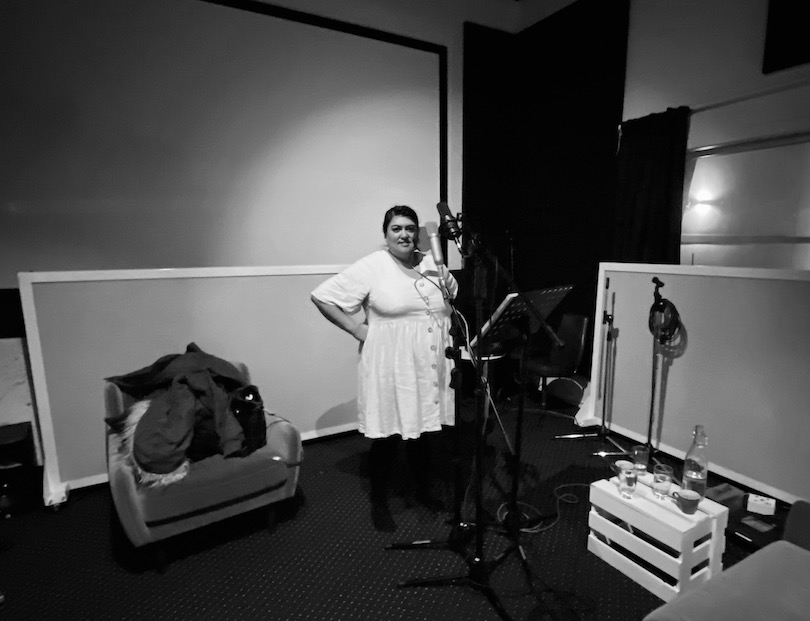 Playwright and filmmaker Josephine Stewart-Te Whiu (Te Rarawa) says of all the creative arts, she didn’t imagine she’d be working on a project like this. “I’m a really shitty listener,” she says from her home in Auckland. “Of all the things, I’m making a podcast, which is really ironic, because I’m so visual. But it was awesome, I learned so much.”

She says she approached it like a film, taking people on a journey with storytelling and sound design. In the writers’ room, Stewart-Te Whiu was tasked with helping Dravid dig deep to stretch the one-hour stand up to a two-and-a-half-hour podcast, but says it was so rich with detail it wasn’t hard. “Her stand-up is so funny and it’s also really heartfelt, but you are left with all these questions of why.”

One of the most satisfying arcs involves her mum, who Dravid says is her “biggest fan” and has heard the podcast. “We always knew my mum was an important part to the story, so we knew it was going to start and end with this relationship.”

In an especially good episode, we get the backstory to how Dravid’s Sāmoan mother and Indian father first met. Dravid introduces it with: “If this was a film, this would be the part where they do a flashback. It’s to help you understand why the protagonist is acting batshit crazy.”

Mirroring Dravid’s own first marriage in many ways, her parents’ culture clash eventually drove them apart. It’s a fascinating insight into Dravid’s cultural identity and her inherited trauma, as well as a glimpse into how so many migrant families find their way to New Zealand. “My favourite line Angella wrote was ‘being mixed race is confusing as fuck’,” says Stewart-Te Whiu. “I can really relate to that. I’m a white-skinned Māori so you’re constantly going ‘which box do I belong to?’ but you don’t belong to either. That was really fun exploring that with her.”

Dravid says she and Stewart-Te Whiu enjoyed a rare compatibility as writers and collaborators. “I like that she pushes what’s comfortable. We both delved into our trauma and found the comedy in that. I think the writing space felt really safe for both of us.”

The pair worked together for nine months. Stewart-Te Whiu admits the pair are both “perfectionists” and each other’s biggest fans. “So we’d push each other and then try and top each other.”

At the end of each performance of Down the Rabbit Hole, Dravid would leave time for questions from an inevitably incredulous audience. And so in a bonus ninth episode, Stewart-Te Whiu and Dravid conduct their own Q&A with frequently asked questions from audience members. It’s a nice way to acknowledge the collaboration between the two, and answers many of the questions raised along the way. But one question we can’t answer is why a grown man would put a teenager through all of that. Dravid doesn’t have the answer either, but she’s hoping others who have had similar experiences will at least feel seen.

“Laughing is a sign of acceptance. It’s an acceptance of your truth. No one wants to talk about their scars but it’s helpful to other people when they’ve got the same ones.”

Love, Rock Bottom and Other Triumphs is available on Audible now,